Katz Tales: Chaos ensues for cats and human when a squirrel enters the house 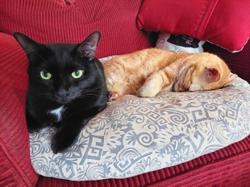 Tic Tac raced up the security grate, her little paws skimming over the bars as if she were swimming in air. Inkie ran along the bottom of the sliding door, chattering loudly in encouragement. At the top of the grate, clinging to the upper bar for dear life, a plump red squirrel screamed in horror.

Honestly, I sometimes wonder if our living room is a homing beacon for wildlife. Apart from the bees, toads, and lizards that take up residence, we’ve also hosted wandering birds and cobras.

Thankfully, squirrels aren’t deadly dangerous. This one, squealing louder than a car alarm, appeared inches away from having a heart attack.

Jumping in, I plucked Tic Tac from the grate. Wriggling furiously, cursing loudly in Cat, she hurled insults at me, threats at the squirrel, and wails of encouragement at Inkie.

That big boy wanted to climb the grate, but he's too bulky to twist and turn comfortably in the narrow space between the steel and glass. Leaving him to puzzle it out, I tossed his sister into the upstairs bedroom, shut the door on her, and legged it back.

It's a pity we don't have CCTV because the next few minutes were complete pandemonium. I chased Inkie, Inkie chased the squirrel, and the squirrel ran along the wall and furniture as if he were running a furry Rollerblade Derby.

Inkie is definitely a smart cat because he managed to chase his quarry and keep an eye on me at the same time. As the squirrel ran up the cat tree, Inkie banked sharply, zigzagged out from under my grasp, and jumped up onto the cupboard.

The deft rodent sommersaulted over the cat, bounced past me, and rocketed away from the open kitchen window that led to the garden and safety, and back to the grate and window that bar the other exit.

I’m not athletic but I have iron determination. Red-faced, panting, and twisting in ways I didn’t think were possible, I stayed in the race. Eventually, Inkie dodged left when he meant to turn right, and I caught him. He too cursed a blue streak as I chucked him into the bedroom with his sister.

As the two furries lambasted me, I heard myself say, "Why can't you be more like your cousin Sam?"

Awful, isn't it? But when you're hot and bothered, these things will slip out.

It's not normally something that would occur to me except that last month, for the first time in almost three years, I was finally able to go home.

Mum met me at the door and hugged me, but I hesitated the go inside because Sam, her cat, was on the sofa. He’s a lovely boy but he is quite shy because he lived on the streets for much of his life.

So, after three years of absence due to Covid lockdowns, I expected him to dive for cover.

As I called from the doorway and peeked round, Sam got to his paws hurriedly. But as soon as I said his name, his golden eyes lengthened and he meowed a friendly greeting. Then he rolled on his back and let me pet him.

I was touched that he remembered me, but I had forgotten that Sam is the cat equivalent of a couch potato.

In the three weeks I was home, Sam trundled out for his morning constitutional around the garden, and then divided his time between the sofa and bedroom.

Even the birds know how lazy he is. When my mum puts out crusts for them, they fly past Sam to collect their breakfast. He never raises a paw (see why in the sidebar).

When visiting my mum, I laughed at Sam’s laziness, but back in my own home, furniture higgledy-piggledy, and the two hunter cats squalling from the bedroom, I discovered new appreciation for the old boy.

As for the squirrel, he squeezed through an impossible gap and ended up in the indoor garden. Scaling the palm, he sat up high, sucking in sobbing breaths. He had a handsome reddish coat, very plush, but the poor wee thing looked shattered. Also, the palm was a good metre short of the open roof grill.

Squirrels are not the brightest of souls. The thought of persuading him down and shepherding him through the living room and out of the front door, horrified me. Then, remembering how I’d seen his friends walking up the water pipe outside, I had a brainwave.

I went and found a broomstick. Going upstairs, I ran the predictable gauntlet of insults from a hastily exiting Tic Tac and Inkie. As they ran to the living room, I opened the window. It took 10 minutes of wriggling and fiddling but finally I got the dratted thing wedged solidly between sill and wall, providing a squirrel stairway to the roof.

Of course, the intruder sat in the tree, absolutely refusing to recognise the help on offer. Beneath him, behind the sliding glass door, Tic Tac and Inkie circled like sharks.

I was about to return to work when Target strolled in, fur baked from a sunbathing session on the roof. The senior cat is above chasing squirrel but he was polite about condoling with the younger cats.

I was handing out treats as a peace offering when there was a flash of red. The squirrel ran up the centimetre thick Internet cable and disappeared onto the roof, completely bypassing my clever broom.

Isn’t it typical? In hindsight, the cats might have chased the squirrel into the garden and up the cable. I could have saved myself a lot of running around.

Hindsight being 20/20 vision, I focused on mending fences. Tic Tac forgave me the second she saw the treat, but Inkie scolded me in between stuffing his face.

It’s been two days and, although we’re friends again, there are times when Inkie gazes at me with flattened ears. I know it and he knows it but I daren’t say it out loud: Cousin Sam would have forgiven me by now. Goofy and Hetty are brother and sister. Goofy is the handsome Tuxie, and Hetty has the shaved tummy as she's just been spayed. Both are six months old, fully vaccinated and already neutered. Goofy is very affectionate and playful while Hetty is shy and calm.