A homeless man holds a mug of warm tea in front of a supply tent at the Berlin City Mission. Photos: dpa

Gruby, 44, has a deep, throaty chuckle. He is from Poland, and chose the nickname to protect his anonymity. It means “the fat guy”.

His face is scarred but he is full of cheer this cold morning, standing in line at a tent run by one of Berlin’s homeless charities, the City Mission, where staff are handing out donations from a clothing store.

Gruby flaunts the trousers he has just been given, made by a famous fashion brand. They are not his first high-end items.

“At home I have things from Gucci and Chanel,” he says. For him, “home” is the flat of an acquaintance.

The charity does receive luxury brands now and again but less and less donations overall these days, a development that is worrying the City Mission staff, especially as there are more and more people seeking help these days.

“We have never had so few clothing donations as at the moment,” says Barbara Breuer, a spokesperson for the organisation. They had more than enough donations at the beginning of the war in Ukraine in February. But now, the amounts have decreased significantly. 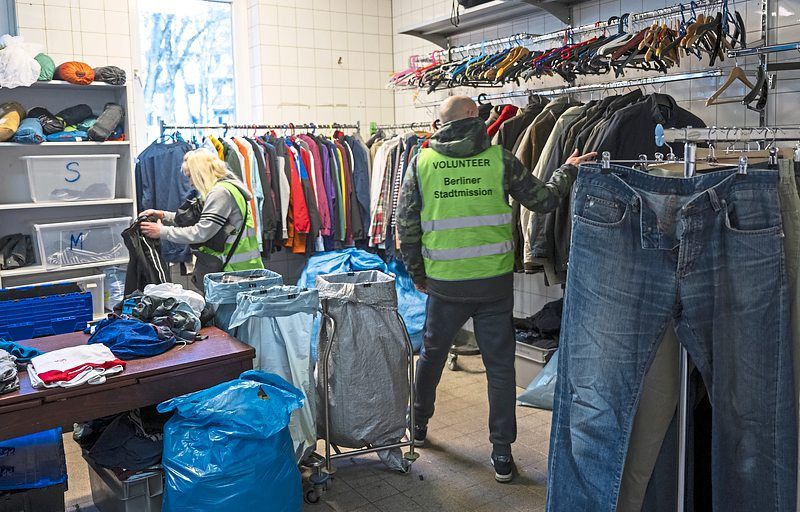 Donated clothing hangs on the clothes rails at a charity which also runs an emergency shelter for homeless people and an outpatient clinic for those in need who are not insured.

More and more people in the German capital are flocking to the charity in need of assistance, due to the war in Eastern Europe which has been fuelling inflation and the energy crisis.

Dawid, 32, has been living on the streets for three years. He initially came to Germany from Poland to work, but found out when he arrived that the job he had been promised did not exist. That frustration, and breaking up with his girlfriend and being separated from his daughter all led him to alcohol and then to homelessness. Many others have a similar story.

“I couldn’t get in here yesterday,” he says in Polish, pointing to the charity’s emergency accommodation. It was overcrowded and unable to accept more people. “Sometimes I wind up sleeping on construction sites.”

The City Mission’s emergency overnight accommodation is one of several shelters in Berlin where homeless people can spend the night. Guests may come at 8pm from November to April and are not only offered a bed but also something to eat. They can also take a shower and speak to a counsellor.

The charity has space for 125 people, but often, more people show up than they can fit. There are many other projects on offer, including long-term accommodation and assisted living projects. But there are also the people who are homeless by choice – like Gruby.

“In Berlin, you must be really stupid if you can’t manage on the street,” he says. He slept in the shelter, found new clothes at the clothing store and can still take a shower. At midday, he is having lunch at the charity’s space across the city, at the Ostbahnhof railway station.

In the afternoon, he is planning to “get something” – meaning steal some alcohol – “because without alcohol you can’t stand the street.”

By evening, he will get some more food at the emergency shelter and can sleep off the strains of the day. Dirk Seliger in the kitchen of the Berlin City Mission, a charity that helps the homeless and sees a growing need even as donations dwindle.

The City Mission is one of Berlin’s largest charities addressing homelessness, with more than 90 projects and facilities. There are other charities active in this area, including Caritas, Diakonie or Tafel.

Officially, according to the Kaltehilfe organisation, there are 2,000 homeless people living on the streets of Berlin while 55,000 don’t have their own place to live, although many believe the number of unreported cases is much higher.

But soaring costs are a problem for the City Mission, which estimates that general costs, electricity and heating prices have risen by up to 50%. Energy costs are skyrocketing in Germany due to Russia’s war on Ukraine, and many people are unable to pay these costs and so seek help.

“We are already noticing that the need is increasing in the city,” says Breuer.

“Berlin’s support system is pretty well developed already,” says the spokesperson, who has positive things to say about the city government and its social policies. The aim is to eradicate involuntary homelessness by 2030.

“Still, there are people who fall through the cracks and can’t manage to get clothes and food.”

Breuer says up to 70% of people on the streets suffer from mental illness that makes it much harder for them to take care of themselves.

Gruby has been living on the streets for a year. He tried to stop drinking several times before that, and was in therapy for some time before he managed 10 months without a drink. Then he started again.

Right now, he says, he is OK with his situation, but he is not sure whether he will ever manage to get off the streets.

He is grateful for the support he gets in Berlin and is hoping he can continue to count on it. “This is my family, on the street,” Gruby says. – dpa/Jonathan Penschek

Spare a thought for the homeless 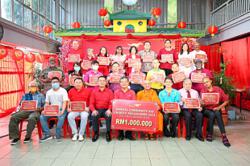