D for dazzle? German licence plates are the new chic on Cairo streets 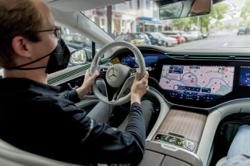 On the streets of Cairo, discarded German license plates are a prized accessory. Photos: Johannes Sadek/dpa

Salim Warda has an impressive array of goods in his car accessories shop in the Egyptian capital. But what catches a foreign visitor's eye are the German number plates for sale – the latest thing in car bling, he says.

Distinct with the standard blue vertical bar on the left and a "D" – for "Deutschland" meaning Germany – plus the EU circle of stars, even a humble "ME" plate from the small town of Mettmann near Dusseldorf becomes a curious status symbol on a Cairo vehicle.

Warda is neither a license plate collector, nor does Mettmann have any obvious links with the greater Cairo area and its population of almost 22 million. The German license plates are rather an accessory, some extra chic for your wheels, seen also on taxis and minibuses speeding round the city.

"Demand is high, people just like them," says Warda, adding that a German license plate is as likely to grace a BMW as a tuk-tuk in the Egyptian capital.

The fad is unlikely to stem directly from the city's size or number of vehicles, which might create high demand for European car fashion items. Surprisingly, the World Bank puts the number of cars per 1,000 habitants in Cairo at 50, the lowest among comparable cities of middle income countries, such as Riyadh (225). For Aiman ​​Gab from Giza, who has driven a taxi for 16 years and has a German plate himself, a deeper cultural attachment is at work.

"The Germans are geniuses, I admire them. They are very well organised and passionate about their work," he says.One license plate dealer at the Al-Taufikaiya, Cairo's market for new and used car parts, shares his sentiments: "Egyptians love German cars and Germany in general."

Look around here and you'll find stacks of the plates, and not just from the best-known locations. Sure there's "B" (Berlin) or "BN" (Bonn), but also "HR" (Homberg/Hesse) and other smaller towns. The occasional "F" (France) or "E" (Spain) still crops up, but "D" is clearly the pharaoh of the trophy plates.

Car owners usually mount them below or next to the Egyptian ones so that the blue bar appears next to the Arabic numerals and letters. "Stylish" is how one taxi driver describes the practice.

The Egyptian traffic police tolerate the German car decorations as long as the local number plate can be seen correctly. From the German side there are no concerns as long as a vehicle previously registered in Germany has been deregistered, says spokesperson Stephan Immen from the Federal Motor Vehicle Office. On the streets of Cairo, discarded German license plates are commonly seen mounted below or next to the Egyptian one on taxis and BMWs alike. There's no obvious explanation for the trend, except perhaps many an Egyptian's admiration for German efficiency and cars.

This means the license plate was fully invalidated. Whether it then ends up in the garbage can, on ebay or on Cairo's streets is of "relatively little importance" for the authorities, he says.

It is scarcely possible to trace how the license plates get from Germany to Egypt. Some probably end up in boxes at the road traffic authorities where someone dips in and takes a few, speculates German car recycler Hagen Hamm.

According to the German Automobile Club, around 160,000 license plates are stolen in Germany every year. Some will find their way abroad at the raw material price of aluminium. Generally though, "there is no legal way to buy old license plates", insists Kai Berkau from the German car service provider PS Team.

Inevitably, Egyptian and even Chinese manufacturers are now also making money from the trend with counterfeits. Warda's Mettmann licence plate "ME-4444" has an obviously fake TUV (road safety certification) sticker, plus a seal from a district office in the German state of Baden-Wurttemberg – and it comes from China.

The "D" and the EU stars can be found on Egyptian imitations but the font and colours clearly deviate from the originals. A counterfeit plate from China costs 25 Egyptian pounds (RM4.65), and an old German original around 75 pounds (RM13.90).

The fact that Egyptians attach the number plates to rust heaps seems to be secondary to the trend.

"It's all about showing off," says Warda. "He could actually drive a Mercedes for all anybody cares." – dpa

Personalised plates rake in US$24mil since 2020