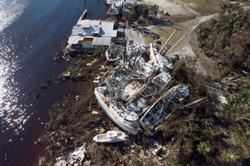 During a storm, animals can feel the drop in barometric pressure, the static charges, and they’re acutely sensitive to the noises. Photo: 123rf.com

As Hurricane Ian lashed Fort Myers, in Florida, the United States, with howling winds and sloshed floodwaters over the banks of the Caloosahatchee River, veterinarian Sharon Powell and her husband retreated to the safest place they could find for themselves and their pets a downtown parking garage.

Then they waited – riding out as the fierce southern eye wall of the Category 4 storm passed directly overhead.

“The surge from the river will be coming this way soon,” Powell shouted while dodging chunks of drywall from a nearby construction site that were flying like missiles through the garage. “They’re predicting 8 to 12ft (2.4m to 3.6m). So we will be ready to go up to the second level.”

The hunkers in the garage, in downtown Fort Myers just south of the Caloosahatchee River late Wednesday afternoon (Sept 28) as Ian, its winds still at what the National Hurricane Center estimated at 140mph (225kph) at the time, battered a huge swath of the Southwest Florida coast, driving record storm surge into many coastal communities.

At 11am Wednesday, portions of Fort Myers were already submerged under 3 to 4ft (0.9 to 1.2m) of water, the city said via Twitter. And got worse later. Streets of downtown Fort Myers in Florida, the United States, get flooded from the surge as Hurricane Ian hits the state's West Coast as a Category 4 storm, on Sept 28. Photo: TNS

Powell is a Fort Myers native. The 59-year-old owns the Edison Park Animal Hospital and lives in a house less than a mile (0.3m) from the Sun Trust Plaza garage, located on Martin Luther King Boulevard.

“This is the most destructive and dangerous hurricane I’ve ever seen here,” she said, nimbly jumping over a shrub that skidded through the garage. “It’s worse than we expected.”

Ian, which came is a slow moving monster with 155mph (249kph) winds – 2mph (3.2kph) short of a Category 5 – pummelled and soaked Florida’s Gulf Coast islands, towns, cities and gated communities all day and into the night.

Late afternoon, in another parking garage south of downtown and across the river from Cape Coral, a Miami Herald reporter and photographer hunkered down as the eye ground slowly past, listening to the wind’s shrieks and moans and flinching when electrical transformers blew and lit up the air with green flashes.

Out on the streets, stoplights dangled 6ft (1.8m) above intersections. Fallen trees created blockades. All roads leading to Fort Myers Beach and the Sanibel causeway turned into impassable rivers.

The city centre was flooded with 4 to 5ft (1.2-1.5m) of water. Boats from the river bumped against parking meters.

Back at the parking garage, Powell and her spouse Jon let pit bull Emma – wearing a dog-size life jacket – and terrier mix Norman walk around.

“Norman is 18 and calm but Emma is very anxious,” Powell said. “Storm anxiety in animals is complicated. I prescribed anti-anxiety meds to some of my patients in anticipation of Ian. They can feel the drop in barometric pressure, the static charges, and they’re acutely sensitive to the noises.”

The Powells battened down their house and the clinic before taking cover in the garage.

“Our clinic cats – Shirley and Miles – are safe there. It’s a fortress and they can climb up high,” Powell said, adding that Shirley was named Employee of the Month and that Miles is unflappable in a crisis.

Will their home survive the storm of the century?

“I hate to think what’s happening over there in the surge,” she said as the puddles grew beneath her feet, and the howling wind showed no sign of abating. “It could be under water soon. Or already.” – Tribune News Service/Miami Herald/Linda Robertson 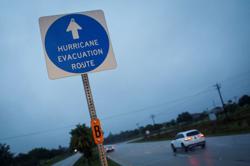