The Harz Mountains in Germany lost 50% of its forest cover between 2015 and 2020 due to prolonged drought events. Photo: AFP

Forests play a key role in the water cycle. They filter and bind nutrients, a necessary condition for good water quality. The fewer nutrients there are in the water contained in reservoirs, the easier it is to treat for drinking.

But intense droughts and forest fires, exacerbated by climate change, lead to the death of trees, making them vulnerable to parasites and diseases.

This is, for example, the case in Germany, in the Harz Mountains, located in the north of the country, which lost 50% of its forest cover between 2015 and 2020 due to prolonged drought episodes.

However, this German region is also home to the Rappbode reservoir, one of the largest in the country, which supplies approximately one million people with drinking water.

A study conducted by the Helmholtz Center for Environmental Research (UFZ) demonstrates the potential effects of deforestation in this region on the drinking water yields of the Rappbode reservoir.

And the predictions are not encouraging, because anticipated deforestation could result in an 85% increase in dissolved phosphorus concentration, and an over 120% increase in nitrogen concentration in the reservoir's Rappbode pre-dam in just 15 years.

Since the rapid decline of forests in the eastern Harz region has now become "a matter of grave concern for the reservoir and waterworks operators", several solutions will need to be considered, according to the study authors.

These include the reduction of nutrient inputs to reservoir catchment areas or reforestation projects with more drought-resistant tree species.

"We were actually surprised by the extent of this effect," explains Xiangzhen Kong, researcher at UFZ and study co-author. – AFP Relaxnews

How US native groups are repairing lands damaged by colonisation 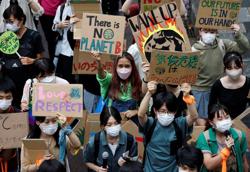