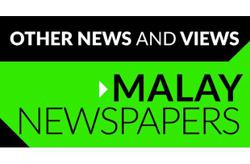 Who doesn't love spine-tingling tales? Do you have any stories of the supernatural to share? Write to us in 700 to 800 words (in Word or Text format). There is no payment for submissions, and we reserve the right to edit all submissions. Email lifestyle@thestar.com.my with the subject "Spooky story".

Nathan's fascination with all things associated with the forest, including the flora, fauna, the inhabitants and their culture resulted in strange and scary experiences.

While browsing through a handicraft shop in Taman Negara, Nathan was attracted to a pair of intricately carved figurines of forest spirits. The eyes seemed to communicate with him in silence. He felt a strong desire to own the beautiful sculptures. They would certainly enhance his collection of objects related to the forest. So he bought them.

On returning home after an exciting and adventurous trip, Nathan displayed his new prized possessions in a prominent place at home. A close friend, also an ardent admirer of aboriginal craft, persuaded Nathan to sell him the female figure. Nathan reluctantly parted with it.

Over the following days, mysterious occurrences would baffle Nathan.

The figurine went missing from its original position and was found in different locations within the house. All persons in the house denied moving it.

Hoping to unravel the mystery, Nathan kept awake one night to observe the figurine. He was shocked to actually see it floating to different parts of the house, as if searching for something or someone. However, the movements stopped when other family members were present. Nor did they experience Nathan’s disturbing emotions.

He searched within himself, without success, for answers to his predicament. He felt driven to the borders of insanity.

On the insistence of his wife, Nathan decided to consult a psychiatrist. Counselling and medication prescribed to calm his nerves didn’t help. The debilitating feelings seemed to grower stronger.

As a last resort, despite his lack of faith in occult practitioners, he decided to consult a bomoh.

On the appointed date, the bomoh laid out his prayer paraphernalia in front of the figurine, lit fragrant incense and chanted incomprehensible verses. He stunned everyone by relating with uncanny accuracy how Nathan had acquired the figurine and the subsequent bizarre occurrences.

The bomoh declared that the figurines, carved from the same tree, had acquired life with a capacity for emotions and empathy. The figurine was affected by deep separation anxiety and was pining for its mate. In desperation, it was transferring its emotions to Nathan in a plea for help. According to the bomoh, the remedy was to reunite the figure with its mate.

Nathan followed the advice of the bomoh. He recovered the female figurine from his friend and went on a journey to locate the aboriginal artist who had crafted the figurines. He got the craftsman to mount the two figures as an inseparable pair on a common wooden base.

Nathan’s effort in uniting the figurines brought closure to the strange occurrences and emotional upheavals. The experience enhanced Nathan’s respect for the forest trees and the culture of aborigines. He now firmly believes that trees as living beings can communicate with humans while experiencing emotions.