“One teh, two kopi-O, three kaya toast!” Tall Sook shouted from the front to his workers in the kitchen at the back of his coffee shop.

Although short and hunched, Tall Sook had a loud voice. Everybody called him “Ah Tall”, which means hunched back. Always good-natured, he didn’t seem to mind. In an ironic twist of courtesy, my mother insisted that we address him as Tall Sook or Uncle Tall.

Tall Sook was the boss of the Nam Wah kopitiam in Kampar, Perak. Strategically located at a busy junction, it enjoyed brisk business in the 1960s. It boasted its signature Hainanese roti kaya, dai bao (big dumpling) and Loh Mai Kai (steamed glutinous rice with chicken). There was also a popular noodle stall there.

Before the war, like many Hainanese folks, Tall Sook used to work for a British family at the army base in Penang.

Through the years, he had perfected the art of preparing kaya toast, poached eggs and morning coffee. His bread was roasted over charcoal until it had a nice golden crispy feel. His homemade kaya was finger-licking good. It simply melted in our mouths. The aroma of his kaya and toast would drift upstairs where we used to stay. It made us drool.

Every morning, as early as 5am, the hungry tin-mine workers would arrive for their breakfast. The tin industry was booming in the 60s, with thousands of workers. They would be eating either dai bao or a double portion of Loh Mai Kai. They would also have takeaways of some of Tall Sook’s famous kaya toast. They ate fast and worked hard.

As a small-time tin-miner, my grandfather would also frequent Nam Wah for his daily fix of coffee and kaya toast. On his days off, he would take me and my brother there for breakfast. As the coffee was too strong for us, he would order some tea to mix with it. After that, he would pour some of the mixture on a saucer for us to lap it up. This was long before “yin-yang” tea became popular.

Whenever we were at the coffee shop, my brother and I would collect some empty cigarette boxes left behind by customers. The common brands were Abdulla 37 and Lucky Strike. We would use them as “lego” blocks to build houses and other playthings. Despite smoking Lucky Strike for decades, my grandfather had still not made his big strike yet.

There were about 20 marble tables in Nam Wah coffee shop. Typically, a family of six or seven would squeeze around a marble table. There would be a tam thuong (chamber pot) under each table for customers to throw their cigarette butts and other waste.

The good life in Nam Wah attracted many stray cats and dogs. The rats were big and fat, too. The fat cats and dogs would prefer the easy life of feasting under the table rather than chasing rats or robbers.

There would be either a dog or a cat lying under each table. The cats' mewing and the dogs' wagging tails tugged at the children's heartstrings. The children would be busy feeding the animals while their parents were feeding them. So, everyone was busily and happily feasting together. It was an eye-opening show of transfer benefits and associated leakages.

One regular customer of Nam Wah was a jovial and short man. He was only about 4ft (1.2m) tall. Everybody called him lo sai (which means boss in Cantonese). As a bookie, he would come around the shop during lunch hour. His endearing toothless grin helped him to win many customers.

He would approach his customers by greeting them, “Lo sai", to flatter them and win some business. In response, some customers would tease him by saying that he was the real lo sai. Cantonese is indeed a flowery language with many intonations. Depending on how you say it, lo sai could also mean old and small. It was an accurate description of his age and stature.

One of his regular customers was my father, who said that he was one of the most successful bookies working for a big “bookie king” who lived at the top of Golden Dragon hill, a residential area for the wealthy.

“Bang!” There was a sickening sound of crashing metal. It was a serious accident between a motorcycle and a car at Nam Wah intersection. From my room window, I could see the motorcyclist lying motionless on the road in a big pool of blood. The front part of the car was also damaged.

The motorcyclist was surrounded by a big crowd of curious on-lookers. They were busy jotting down the registration numbers of both vehicles involved in the accident. They were hoping that the numbers would come out in the lottery draw. I was disappointed that they seemed to show more concern for their lottery prize than the welfare of the injured motorcyclist. A while later, an ambulance finally arrived to take the him away.

Surprisingly, the car’s registration number actually came out during the weekend’s lottery draw. Hundreds of the townsfolk were jumping with joy and expecting to receive their windfall soon.

However, in the middle of the night, the “bookie king” quietly and hurriedly slipped out of the country. He simply couldn’t afford to pay the prize money to everybody.

It is rumoured that he went into hiding in London, where he remains until today. His big bungalow in Kampar lies empty till today, a sad reminder of the glorious 60s and a hollow life as a bookie king. 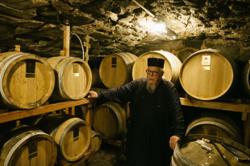 How clouds affect global warming, and vice versa
Spotting gems amidst the chaos that was Malaysia's Parliament meeting
My Pet Story: Lolita behaves just like a little child
From whisky to wood: Finnish monks turn to forestry to cover pandemic losses
South African activists turn to radioactivity to stop rhino poaching
From open-plan to open-air: Setting up office in a Parisian park
E-commerce platform for young ones
My Pet Story: Darling of our neighbourhood
Championing delicious Orang Asli-grown durians Premium
In Tokyo, head for this mushroom-like public washroom when nature calls