There is a series of vignettes towards the climax of the 1996 Roland Emmerich movie, Independence Day (ID4), when the Americans kick off a global effort to turn back the alien invasion by rallying their allies. In a desert somewhere, RAF pilots get a message on radio.

"The Americans are planning a counter-strike!" says the radio guy.

"Well, it's about bloody time!" responds an airman.

This was not a nod to British irascibility; it was, rather, an ode to American exceptionalism, subtle messaging that in world affairs, everyone looked to the United States for leadership, and that Americans were the perennial good guys, the heroes of any global story – so much so that even the descendants of the British Empire were subservient.

It was not that the rest of the world did not know better. There have always been examples of US hypocrisy, transgressions and the occasional war crime or two. There were the successive administrations’ gentle handling of repressive regimes that happened to be oil-producing allies, or the tissue of “weapons of mass destruction” lies that led to the Iraqi invasion.

But the myth persisted, partly because of US dominance in popular culture – whether it was literature, movies or music – and partly because Americans themselves would be among the first to question their government and to try and put things right.

And because they always strived to be better, goodwill would return once more. To paraphrase Martin Luther King Jr’s “... the arc of the moral universe is long, but it bends toward justice”, the United States may stray, but the arc always bent towards its idealistic principles.

That does not seem to be case in 2020. The Covid-19 pandemic, and the Trump administration’s response to it, has exposed the nation like nothing else ever could.

Neither was this something that happened in isolation. For decades, there had been a slow build-up: the anti-science thinking that saw climate change being denied and the rise of the anti-vaxxer movement, the denial of systemic racism, the growing wealth gap and social inequity, the disparity between how blue-collar and white-collar crimes are penalised, partisan politics and the unconscionable influence of lobbyists in policy-making, rising white supremacy and fascism... the list is nearly endless.

It’s not that the United States is the only country suffering from these issues. You can check many of the boxes above for Malaysia too.

But this is the United States we’re talking about. Ronald Reagan’s “beacon on the hill” has turned out to be the light from tiki torches.

All these culminated in Donald Trump becoming president, and the four years of his administration has been distilled into how it addressed the pandemic: a series of bald-faced lies that denied it was even an issue at first, something cooked up by the “fake news” media and the Democrats, then later, another firehose of lies to pretend that his government was doing an exceptional job. Cue: the Everything is Awesome song from The Lego Movie.

Impeached but ‘not guilty’

Even without the pandemic, the year did not start well for President Donald Trump. In December 2019, he had been impeached by the US House of Representatives for attempting to extort the Ukrainian president into running election interference for him.

January started with Trump’s trial on abuse of power and obstructing Congress. Despite overwhelming evidence, the Republican-led Senate decided to acquit him, with all Republicans except Mitt Romney (Utah) voting “not guilty”.

As for Romney, in breaking with his party, said, “The grave question the Constitution tasks senators to answer is whether the President committed an act so extreme and egregious that it rises to the level of ‘a high crime and misdemeanour’.

“Yes, he did. The President asked a foreign government to investigate his political rival.

“The President withheld vital military funds from that government to press it to do so.

“The President delayed funds for an American ally at war with Russian invaders.

“The President’s purpose was personal and political.

“Accordingly, the President is guilty of an appalling abuse of the public trust, ” he said.

His lone voice was not enough. Trump got off, and immediately began a purge of witnesses who testified against him. 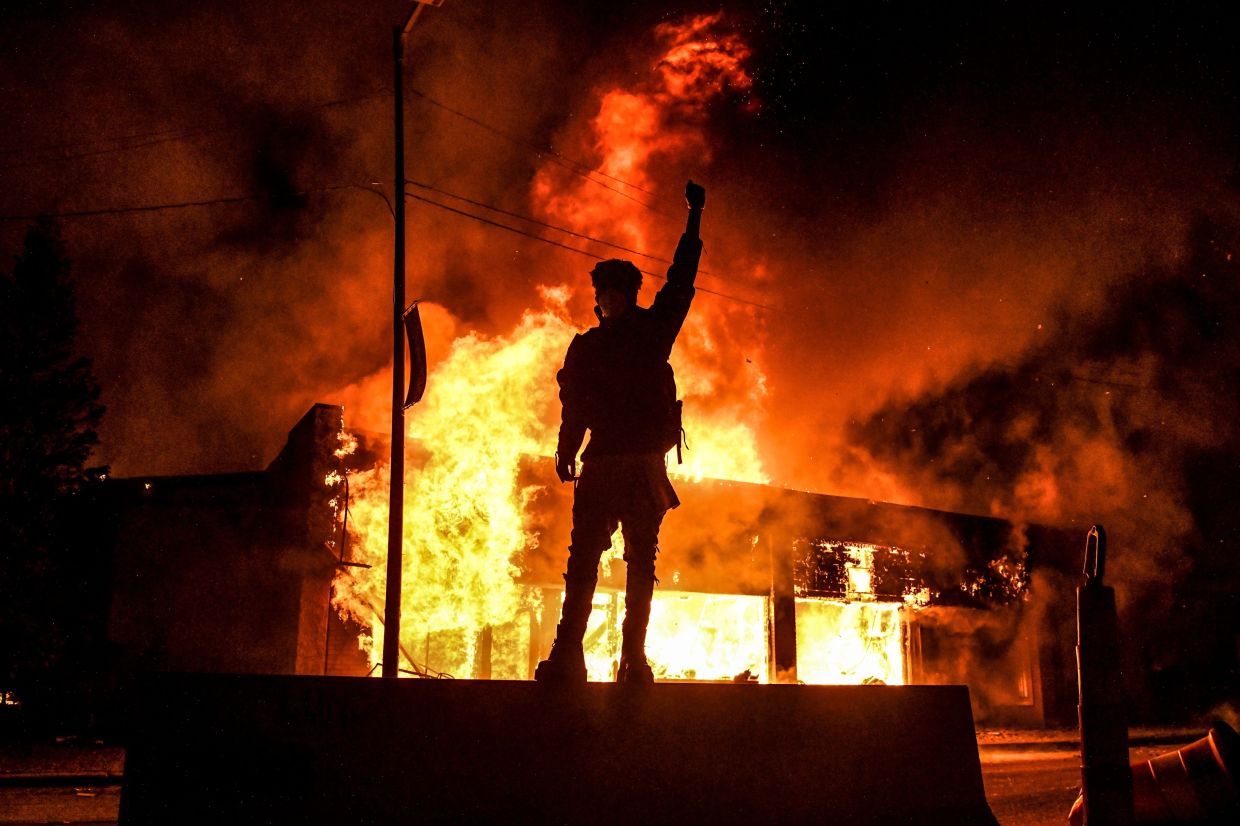 A protester reacts standing in front of a burning building set on fire during a demonstration in Minneapolis, Minnesota, on May 29, 2020, over the death of George Floyd, a black man who died after a white policeman kneeled on his neck for several minutes. -- CHANDAN KHANNA/ AFP

In May, a white police officer calmly knelt on the neck of a prone George Floyd, an African American whom a store clerk had accused of using a counterfeit 20-dollar bill, to subdue him. He ignored pleas from bystanders that the suspect was not resisting arrest, and also ignored Floyd’s complaints that he couldn’t breathe.

Floyd died, and the more than eight minutes of footage that captured the incident is probably one of the most distressing videos you would ever see.

America’s race problems had come home to roost, yet again. Black Lives Matter (BLM) protests were sparked not just in major US cities but even in other countries.

The President’s response was to deny there was any systemic racism in the United States, and to claim that police brutality towards minorities was rare and down to only a few bad apples. He labelled protesters as “antifa terrorists” and tried to get cities to use force to quell these protests.

When protests reached Washington DC, Trump felt he needed to establish himself as the “law and order” president – albeit an impeached one – with a photo op in front of the St. John’s Episcopal Church near the White House. Police were instructed to fire teargas at peaceful protesters to clear his way.

It was the kind of scene you would expect in a Third World country. 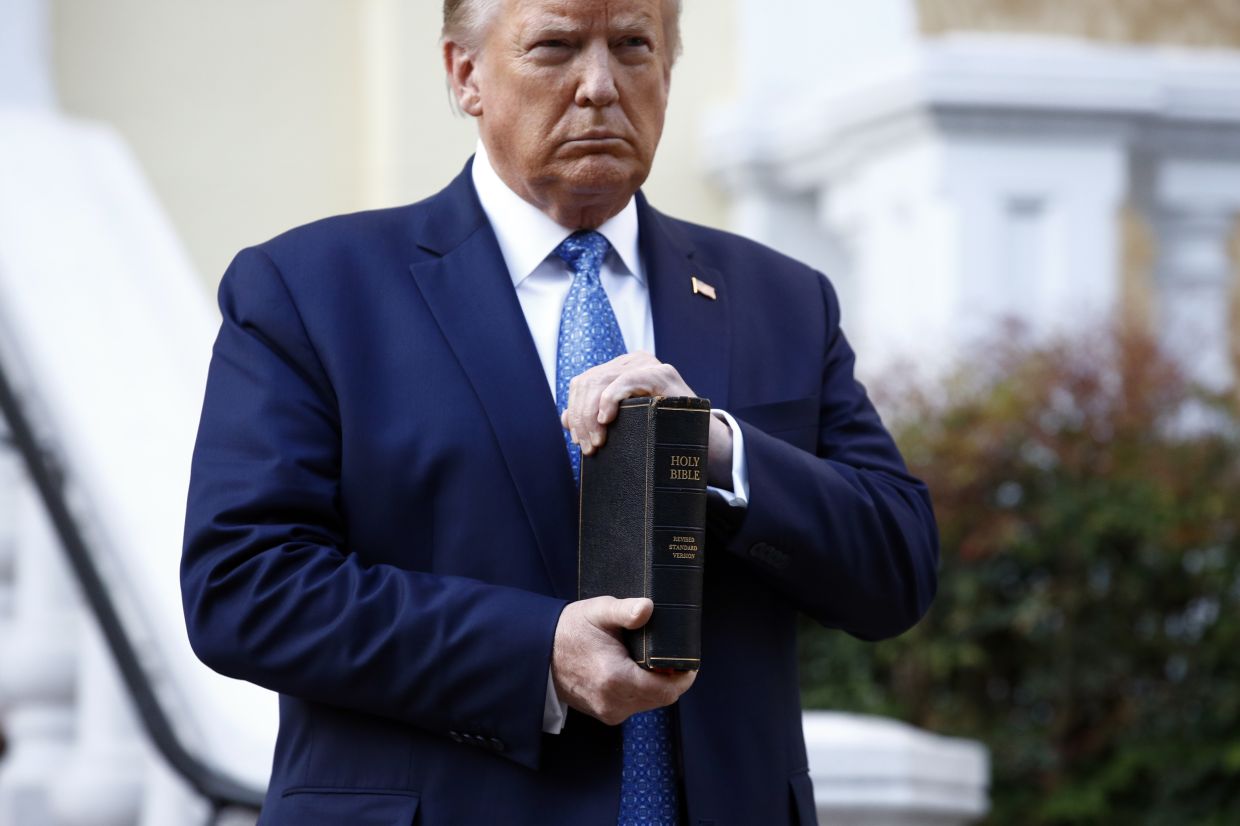 President Trump holds a Bible as he stands outside St. John's Church across Lafayette Park from the White House in Washington on June 1, 2020, after law enforcement officers used teargas and other riot control tactics to forcefully clear peaceful protesters from the area. -- PATRICK SEMANSKY/ AP

Meanwhile, more scandals broke, including exposés on how he had evaded federal taxes for taxes. None of it stuck to “Teflon Don”.

But he still couldn’t blather his way out of the pandemic, despite various entreaties that his administration was in “total control” or that the coronavirus would “simply go away, just like that”.

Meanwhile, public health officials and scientists were not only sidelined, they were maligned as being operatives of the imaginary “Deep State”, leading to death threats against many of them and their families, including Dr Anthony Fauci, director of the National Institute of Allergy and Infectious Diseases.

Few governments have handled the pandemic well. There were a few that did an exemplary job at various stages, only to stumble at some point. There have been too many deaths to pretend otherwise.

But some have certainly done better than others, and in a Pew Research Centre survey of 14 countries, 12 countries thought their governments were doing a relatively good job. Public approval was highest in Denmark (95% good, 5% bad), Australia (94% good, 6% bad), and Canada (88% good, 11% bad).

The US think tank also noted, in the report released in August, that the United Kingdom and United States have “high levels of political polarisation”. For example, 76% of Republican supporters believed the Trump administration had done a good job, while only about 25% of Democrats said the same.

In the United States especially, not listening to scientists and not wearing a face mask have become ideological and political statements.

For many Americans, the whole year has been a wake-up call. Many found out, for the first time, that the United States is the only developed country without universal healthcare, and that their social safety net is so rickety that it’s almost non-existent.

Despite the United States recording the highest death toll per capita (and at one stage, a quarter of all infections across the world was in the United States), despite the fact that their president had been impeached, despite exposés of his tax evasion, despite all the rampant racism, corruption, cronyism and nepotism in his administration, more than 74 million Americans voted to get him re-elected in the US presidential election in November.

Sure, his opponent Joe Biden garnered more than 81 million votes and the all-important 306 Electoral College votes to win the election, but that hasn’t stopped the Trump train, with his administration claiming the election was rigged and refusing to acknowledge Biden as president-elect.

Trump’s attempt at a coup d'état to deny the election results and the mandate of the people is perfectly in keeping with his character, but the tragedy for Americans is that so many Republican political leaders and supporters are backing his despotic moves.

Biden has his work cut out for him. He not only has a host of domestic issues to resolve, including the rising tide of white supremacy and domestic terrorism, but he will also need to undo so much policy and public perception damage to restore the United States’ standing on the world stage.

Establishment Democrats backed him in the primaries because he has centrist leanings and because they believe he can wrest cooperation and consensus out of the reality-denying Republican party.

That may not be good enough given the position the United States is in today. Despite all his cruelty and sloppy shenanigans, Trump did not lose in a landslide, which illustrates the fact that the problem is not one of Trump alone and that the United States is suffering from deep-seated societal problems that may require generational changes to fix.

The upcoming Biden presidency can and must be only the first step on a long journey.

Ikea partners with European luxury brand to offer 13 limited edition scented candles
Are face masks here to stay permanently?
Are your trees are strong enough to withstand storms? Here's how to find out
From Seoul to Dubai, some of the world's initiatives for cutting food waste
Sunny Side Up: No, you're unmotivated and lazy
Beekeeping makes a buzz in cocoa country
Contradictheory: A sad Covid-19 birthday (let's hope it’s the last)
Dear Thelma: An older man is enticing my 65-year-old youthful-looking wife
Curious Cook: We don’t know enough about what is in the food we eat
Katz Tales: When a neighbour has a ratty problem, the cats leap into action