A woman from the NGO Notschleschka distributes food to the homeless in Moscow. — dpa

Darkness had already set over Moscow when a group of about 100 people began to gather in a small car park behind the tracks of Jaroslav Station. It’s mainly men who wait in line every day for a bowl of soup, a cup of black tea and a couple of biscuits in this grim corner of the otherwise lively Russian capital.

But this is often the only chance for Moscow’s many homeless people to get any support during the coronavirus pandemic because the government, they say, has abandoned them. Only with the help of NGOs and volunteers are they able to survive.

For the homeless people waiting at the station in East Moscow, the virus is far away. Almost no one is wearing a mask because they can’t afford it.

“Everyone here has already survived many crises. That’s why I’m not afraid of the disease itself, ” says a man in his early 30s who does not want to be named.

He lost his job a couple of months ago due to the pandemic and hasn’t been able to make a living since. “I’m afraid that the homeless will be forgotten. And there’s more and more of us every day. But nobody takes notice.”

The coronavirus pandemic has Russia firmly in its grip. Case numbers are rising dramatically, especially in Moscow, with around 5,000 daily new infections. The government imposed a week-long lockdown in spring, but there have been no such measures since.

Up to 10 million Russians lost their job during this time, according to estimates, and many of them are still struggling to find new employment. And unlike in some other countries, there are no furlough schemes or one-time payments for the self-employed in Russia.

At times, unemployment rates in Moscow alone are eight times as high in the summer compared to the same period last year.

The restrictions have hit the already battered Russian economy further. The ruble has lost massive value against the euro and the US dollar. Every fifth Russian is threatened by poverty. In some regions far from Moscow, every fourth person already lives below the poverty line.

Gennadi, who also doesn’t want to be named, has been looking for a new job for years. He used to work as a bus driver when payment suddenly stopped: “The company told me to wait. But nothing came. Zero.” Eventually he was unable to pay his rent and became homeless.

Since then, the man from Eastern Ukraine would have been willing to take any job, he says. But because of the crisis, there are barely any. “The country is at a dead end, ” says Gennadi. He spends his day in search of a warm place to sleep. “Train and underground stations. Those are my favourites, ” he explains.

While the city is providing more shelters during the cold winter months, it’s not enough. There are no exact statistics on the number of homeless people in Russia, but the NGO Notschleschka (which means night shelter in English) assumes it’s tens of thousands of people.

Some of them were already homeless before the pandemic, but many first lost their work and then their homes due to the lockdown.

Notschleschka is mainly working in Moscow and St Petersburg. In the capital, it has 12 permanent employees and over 100 volunteers.

While some are responsible for donations, social workers and lawyers advise the homeless in more complex matters. Many of them haven’t had any identification documents for years, making it more difficult to apply for government aid.

Liberal activist Darya Besedina regularly helps out at the soup bus. She was elected to Moscow’s City Council as an opposition candidate last year and has been fighting for social equality in her native city.

“The state has other priorities, ” the 32-year-old says. “But adversity can hit anyone, as the coronavirus crisis has shown. The government should do something now; the problem won’t solve itself.”

It’s private citizens like construction worker Alexander Korotkov who lend a hand here. The team leader distributes bags of warm clothes and shoes to the homeless people, who can order them from him.

Especially as winter approaches, there is a great demand, he says.

Before it gets cold and freezing, the homeless try to somehow prepare themselves for the long winter.

Muscovites have also donated significantly more since the beginning of the crisis. “Many see the crisis and want to get involved privately, ” says a Notschleschka employee. This has enabled the organisation to build a new emergency shelter in the middle of the city centre, but in the long term, it will not solve the problem. – dpa/Claudia Thaler

A warm and free meal is heaven-sent for the needy 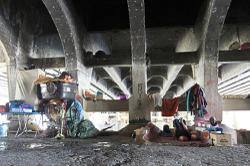 How Abu Dhabi is leading the way in managing high temperatures in cities
Job seekers: Fine line between sprucing up your CV and lying
My Pet Story: Fun times with Rino
Klang Valley eatery's innovative nasi lemak scheme helps needy families become entrepreneurs
Without spectators, the Tokyo Games cuts its carbon footprint by 12.5%
Heart and Soul: To Chief Tang, former Group Scoutmaster, with thanks
Friends for 70 years now, the members of The Seasons 4 are still going strong Premium
All the right tools and gear you’ll need for a bike adventure after lockdown
One for the road: Scotch distillery uses whisky waste to fuel trucks
5 tips on how to build a lasting friendship