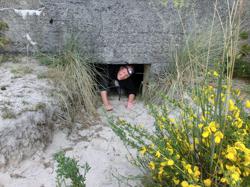 Geocachers find a mini logbook packed in a tube hidden in a manhole cover in the German city of Bremerhaven with the help of their navigation system. — Claudia Stelzmann/UnitedChart/dpa

Is that plastic container nestled beneath a log in the woods somebody’s discarded picnic, a piece of trash – or a carefully hidden cache? It’s increasingly likely that it’s a clue – and there may well be a geocacher hunting through the undergrowth.

Geocachers, equipped with GPS or navigation apps, seek clues that are hidden around the world – everywhere from caves to tree trunks. The caches they seek are mostly containers packed with several items, hidden at a location whose coordinates have been posted online.

When hunters find them, they write an entry in the logbook that’s hidden with the stash and post a note online about what they found, to prove that they were there.

Geocaching is ever more popular, even as it’s become slightly more complicated amid the pandemic. It’s a great way to get outdoors and be active while adhering to social distancing rules, one blog notes.

The geocaching community has quickly adapted. At the pandemic’s onset, organisers scaled back events, adjusted local guidance on how many people could meet up, and posted where which national and regional regulations applied, in a slew of blog and social media community updates. That was all geocachers needed to keep going.

There’s no sign that geocaching is abating in Germany, based on the number of people logging their finds. People were adapting to contact restrictions, but they weren’t stopping their activities altogether.

It’s a hobby that inspires plenty of passion.

“You see the world with new eyes if you do this for any length of time. Sometimes I’m in the woods and I see a path where there wouldn’t usually be one, and it’ll lead to a can tucked away under a piece of wood, ” says Uwe Stelzmann, 57, over the phone.

“Each cache is different, ” he says.

Stelzmann started geocaching 11 years ago with his family and has since found over 10,000 caches in more than 20 countries worldwide. Uwe Stelzmann crawling out of a bunker in western Denmark. He first began geocaching with his family 11 years ago.

The whole business started 20 years ago, when Dave Ulmer, a computer consultant, put the coordinates of his first cache online on May 3,2000. He packed videos, books, software, food, money and a slingshot into a black plastic bucket close to Portland, Oregon, the United States, with a note saying, “take some stuff, leave some stuff. Write it all in the logbook! Have fun!”

The US government had just announced that it would remove selective availability, so anyone and everyone could pinpoint their location or the location of items left behind for later recovery.

Several people who read Ulmer’s message set off on the hunt.

Soon, websites went online stating where new caches could be found. That was the birth of today’s geocaching.com.

The company now names more than three million geocaches in 191 countries worldwide. In Germany, there’s another site, too: opencaching.de. Uwe Stelzmann holding an ammunition box on top of Ben Nevis, the highest point in Scotland.

Followers just need a GPS device or a smartphone app where they can enter coordinates, Stelzmann says. But just because the technology is there to bring you to a site, caches can be tricky to find, perhaps hidden in a tree trunk or nestled under roots or a pile of leaves.

Geocachers try to be aware of the impact they have on the environment and avoid straying too far from the path, according to Naturfreunde Brandenburg, a group in Germany that organises geocaching tours.

Caches hidden close to paths means they are found more easily, with less damage to nearby plants and creatures.

Sometimes the caches contain a series of clues that need to be decoded, or lead to a trail. Pieces of a puzzle need to be fitted together or might only be legible using a UV light, for example.

Anyone can create a trail of clues, and nowadays, tourist offices, teachers and museums have also created routes using GPS. Brandenburg’s Naturfreunde started its own guided geocaching trips in 2012 to teach people about nature. Anyone who joins in can learn about local flora and fauna, or how to use their arms to measure the circumference of a tree and guess its age, explains Grit Gehrau, the state chairman.

“Geocaching is a great way to bind nature and technology together, ” she says. “Being in the fresh air is good for body and soul.” – dpa/Ann-Kristin Wenzel 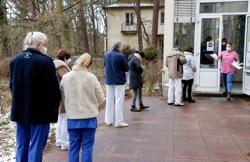 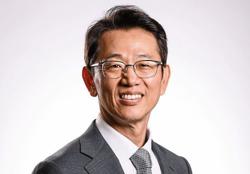