Scientists are raising corals on land and planting them on reefs

For the first time, corals raised by scientists in a lab and transplanted to the natural reefs in the Florida Keys are primed to join an annual show of sexual reproduction called the coral spawn. — Dreamstime/TNS

Not long after the August full moon, Florida’s reefs are the scene of an annual show of sexual reproduction called the coral spawn, with coral colonies releasing masses of tiny white, pink and orange spheres into the ocean.

This year, for the first time, corals raised by scientists in a lab and transplanted to the natural reefs are primed to join the spawn – a promising milestone for ongoing efforts to restore the ravaged reef systems off South Florida, the United States.

“This is really amazing because we had no idea what to expect when we planted these corals five years ago,” said Hanna Koch, a coral reproduction scientist at Mote Marine Laboratory, which is using a technique called microfragmentation-fusion to raise the corals on land and plant them on local reefs.

That technique is helping slow-growing corals such as the mountainous star to grow up to 50 times faster than they would normally grow, she said. This year, scientists checking the mountainous stars, a threatened species that was grown in a nursery and planted on reefs in the Florida Keys and the Caribbean in 2015, have achieved sexual maturity and are primed with egg-sperm spheres called gametes.

Scientists from Australia to the Keys are racing to restore reefs as more frequent climate change, bleaching events, increased coastal development, pollution and overfishing are killing corals at an alarming rate.

In Florida, warmer temperatures cause nutrient-rich waters to produce more algae, which can suffocate corals. Dredging has also affected colonies, and increased boat and ship traffic around the Florida reef tract has also taken a heavy toll on corals. Recently, a mysterious disease that erupted about five years ago off Virginia Key began spreading very fast down the coast.

The discovery of gametes, or an organism’s reproductive cells, on mountainous star corals that were planted just five years ago means that the use of macro fragmentation and fusion can help replenish depleted reefs faster, Koch said.

With this technique researchers break large brain corals into tiny microfragments, producing clones that grow in the lab’s nursery. When they reach a certain size after a few months, they are planted in clusters in a circular pattern onto the reefs. After a few years they begin to join together, creating the brain-like shapes they are known for. Scientists found out they grow more quickly because of the microfragmentation-fusion method, which Mote also calls “reskinning”.

“We can grow large boulder corals to be about the size of a dinner plate within two or three years, ” said Erin Muller, science director of the Elizabeth Moore International Center for Coral Reef Research and Restoration at Mote. “And because we now know that this size is reproductively viable, we know that this method is going to work for coral restoration, ” she added.

What’s also remarkable about the corals observed in this research is that they endured a brutal global bleaching event in 2015, survived Hurricane Irma in 2017 and were untouched by the 2019 outbreak of the disease known as stony coral tissue loss disease, which has affected millions of reef corals in Florida.

It may seem like a small miracle but it’s actually science, Koch said. The lab-raised corals were made more resilient through multiple growth interventions to give them a fighting chance at withstanding climate change.

Over the next few days, the researcher will be diving off of Cook Island near Big Pine Key every night to check on the soon-to-be parents. Spawning only happens once a year and the timing is usually tied to the August full moon. The corals will be releasing eggs and sperm into the water column during in the coming days, Koch said.

“That’s ultimately what we need them to do, reproduce on their own once they are out here in the ocean. That’s the only way restoration is going to work, ” she said. – Tribune News Service/Miami Herald/Adriana Brasileiro 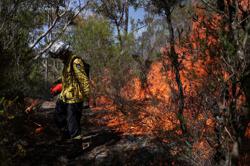