A recent photo taken in Postojna Cave showing an olm, an ancient underwater predator, which can live up to 100 years and only breed once in a decade. Photo: AFP

Slithering through their subterranean aquarium, three "baby dragons" have gone on display in a Slovenian cave, where they hatched in 2016 in a rare successful breeding, officials said last Thursday.

Only 30 visitors per day will be allowed to visit the so-called baby dragons – ancient underwater predators that can live up to 100 years and only breed once in a decade.

"We are proud to present three out of the 21 baby olms, the world-famous 'dragon's offspring', which we have kept a close eye on since 2016," the Postojna cave said in a statement.

The three are among 21 offspring that hatched in 2016 when one of the olms at the cave laid around 60 eggs in one of the observation tanks.

To ensure their survival and gather more information about the creatures, cave authorities kept them far from visitors in a cave laboratory as their "best kept and most carefully guarded secret" – until now.

Reaching a maximum length of 35cm, the blind animal with its four tiny limbs is a far cry from the scary monsters conjured up in national folklore.

Sometimes also referred to as "human fish", the slim vertebrate sports three feathery gills on each side of its elongated snout. The body's sheer pink skin makes it easy to spot the internal organs.

The protected eel-like species can go without food for up to a decade.

Found primarily in Balkan cave rivers, the olms have been living in the world-famous Postojna cave, 50km southwest of the capital Ljubljana, for what researchers say is millions of years.

The baby dragons' presentation comes only days after the cave – one of Europe's largest that usually draws 700,000 visitors a year – reopened its doors following three months of closure due to the coronavirus epidemic. – AFP Relaxnews 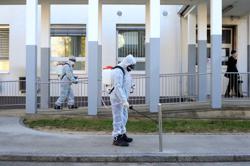 Slovenia calls an end to its coronavirus epidemic, relaxes some border controls