Training shelter dogs to be service dogs for military veterans 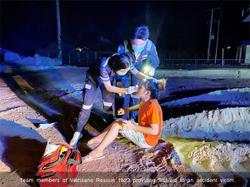 What may be a quick errand to some is more complicated for the US Army veteran. After 15 deployments during his nearly 21-year career, Wonacott said he has post-traumatic stress disorder and is averse to crowds.

Wonacott figures it’s been five years since he last went to a mall. He credits Delta, his new service dog, for making it possible.

Delta, a year-and-a-half-old lab mix, is among the latest dogs to be paired with a military veteran through the Shelter to Service Dog programme, a joint effort by two non-profit organisations in Jupiter, Florida, the United States: the Renewal Coalition and Furry Friends Adoption, Clinic and Ranch.

The programme has set up veterans with 22 service dogs since its 2014 launch. Wonacott, of Troy, Tennessee, came to Jupiter to pick up Delta a few weeks ago.

“For me, it’s like the ultimate honour to give one of our service dogs... to a hero like this, ” said Pat Deshong, Furry Friends’ president.

The non-profits work together to find deserving veterans, train dogs and match them based on a veteran’s needs.

And, perhaps most significantly, they foot the bill with help from donors, Deshong said. Training a service dog is a time-intensive process that can last six to months and cost about US$15,000 (RM65,000), she said.

During that period, the dogs stay at Furry Friends’ Martin County ranch and at the Fort Myers home of trainer Summit Earhart.

Midway through training, Earhart said he meets with veterans to pair them up with dogs he thinks will be a good fit. That gives him a few months to train each dog specifically to each veteran’s needs.

Delta knows to wake Wonacott up from nightmares. Charlie, a three-year-old Belgian Malinois paired with US Marine Corps veteran Antoine Diop, is trained to lean against the retired sergeant so Diop can safely lower himself to the ground if he feels a seizure coming on.

Diop suffered a traumatic brain injury in 2017 from an improvised explosive device blast in Syria. The Atlanta resident picked up Charlie in February.

“He’s definitely a game-changer, ” Diop said. “I can tell you that.” “Now I am in my training,” Wonacott says. “He’s trained; now it is my turn. It is awesome. I am getting used to the commands and understanding how he is going to interact with me.” Photo: Tribune News Service

Deshong speaks highly of Earhart’s abilities. She hopes to up the programme’s production to about eight dogs every half-year now that he’s recently come on-board.

Earhart takes the dogs to crowded and loud public places, like bowling alleys and Disney World, to train them how to act in public.

“They have to be able to work under situations like this, ” Earhart said, while Delta lounged with a weed whacker whizzing nearby.

The dogs come from a mix of sources. Delta was surrendered at Furry Friends when he was nine months old because his owner thought he was too energetic, Deshong said. Others have been through more dire circumstances, labelled dangerous at kill shelters, she said.

So Deshong thinks of it as saving two lives: the veteran and the dog.

“The transformations are incredible, ” Earhart said. “I mean, we take dogs that are battered and broken and beaten and turn them into healing agents for these guys.”

Wonacott linked up with the programme after going on a marriage retreat hosted by the Renewal Coalition. The non-profit invites service members, veterans and their families to Jupiter for all-expenses-paid retreats and other programmes.

“And we stay with them, ” executive director Mary Hinton said. “Once they go back, they know they can call me at anytime.”

Wonacott acknowledges he was skeptical of taking on a service dog, but he credited Hinton and his wife, Elly, with pushing the issue and helping him continue on his path towards recovery.

There have been peaks and valleys by Wonacott’s own admission.

His deployments took him to both Iraq and Afghanistan. Two of his friends were killed in Iraq in 2006 and Wonacott said he nearly tried to kill himself the following year: “My barrel got full.... I was just done.”

At that time, he started seeing a psychologist. Nearly 10 years later, in 2016, Wonacott became the senior medic of his unit, the 160th Special Operations Aviation Regiment.

While in charge, he told colleagues about his own challenges with suicide ideation and heard from 60% of the 160th’s 35-person medical section that they had similar thoughts.

Wonacott went to psychologist appointments with his colleagues. He worked with higher-ups to drastically increase the number of medics in the 160th to reduce stress and burnout.

But he still has lingering anger issues, Wonacott said – set off by things like loud noises and claustrophobia.After his string of deployments, Wonacott said he transformed from a happy-go-lucky guy to someone who could easily hide all emotions.

“(Delta) reacts to when you get that anger. He’s trained to go interact with you, ‘Hey pet on me a little bit’, ” Wonacott said. “And by the time you’re done petting him, you’ve forgotten why you’re angry in the first place. To me that is huge.”

He rose to the rank of master sergeant before retiring from the military about two months ago.

Wonacott is waiting for his Department of Veterans Affairs benefits to kick in, and has a part-time job doing topographical surveys. He says staying busy is the key to a good transition.

Delta will help with that, he said.

“It gives you something else to focus on, ” Wonacott said. “I’ve got to take care of him. I’ve got my family too, but when they’re not with me in public or whatever, I’ve got this dude to just kind of hang out, you know?” – By Samuel Howard/The Palm Beach Post/Tribune News Service

8 tips on how to photograph your pet

Worried about your pet during the Covid-19 pandemic? Here's what you should know