A few months back, in my review of Lego’s Duan Wu Festival set, I included a list of future Chinese-themed sets that I hoped the toy company would do.

While the Mooncake Festival set I hoped for never came to be, I was delighted when they announced that one of their latest Chinese New Year sets would include a lion dance troupe.

Here is a lowdown on the two sets. 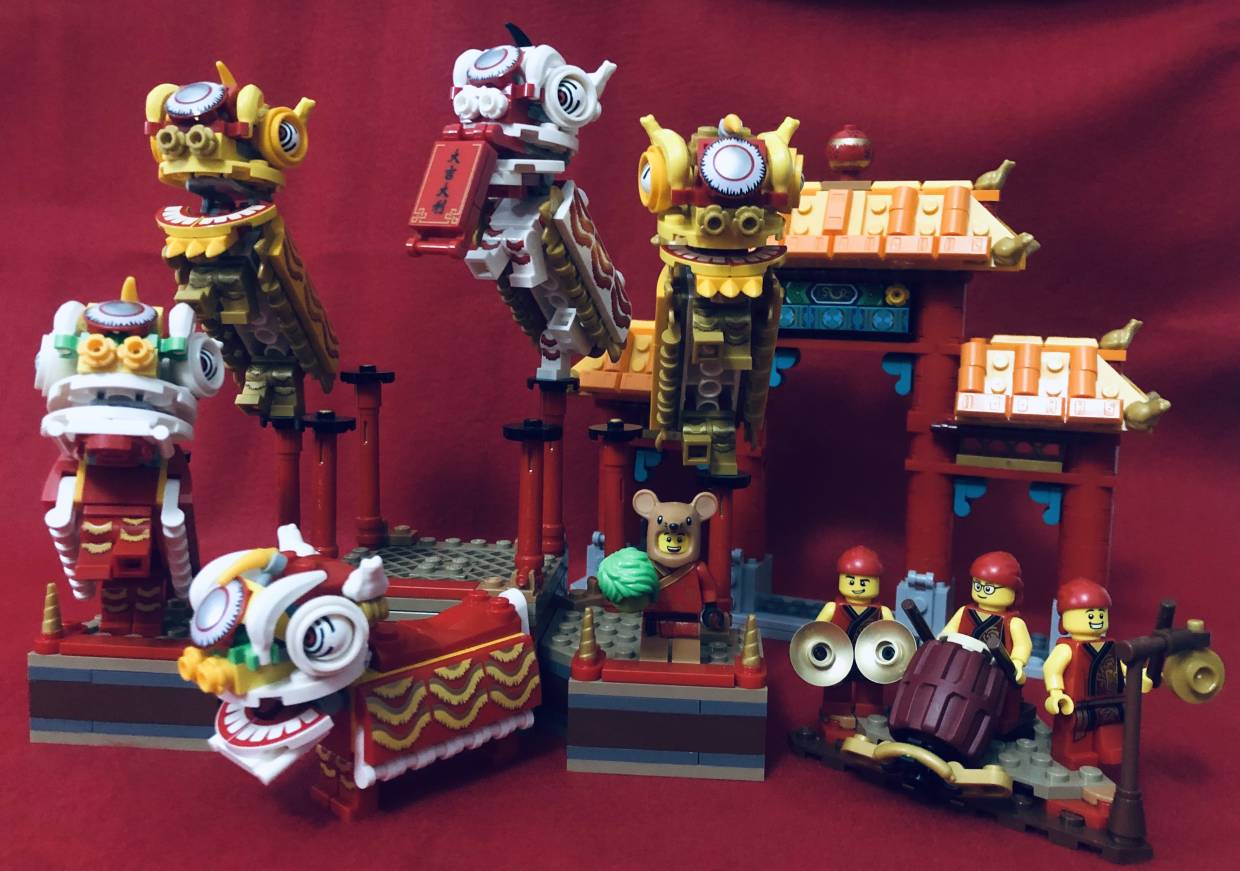 The Lion Dance set is arguably the best of Lego's CNY sets so far.

With five beautifully (and creatively) designed small lion figurines and a stage with the prerequisite poles to pose them on, this for me is the best of the CNY sets Lego has released so far.

It comes with eight minifigures (including one in a rat costume) to accompany the five lions, a percussionists’ stage with a unique drumming play function, and another temple gate (albeit, smaller than the Temple Fest one). 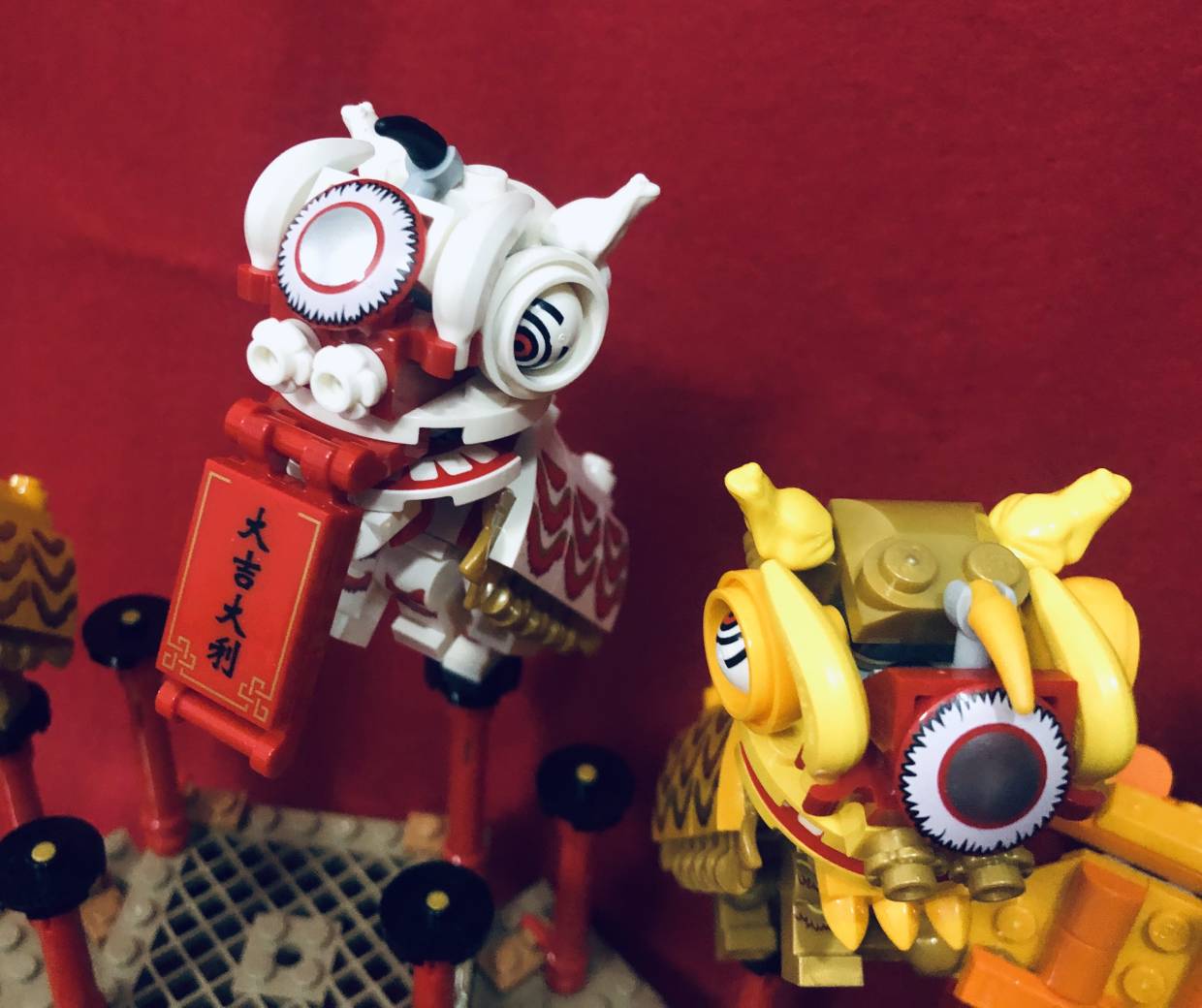 Look closely, and you'll see some frogs and bananas on the lion heads...The builds are relatively easy, especially the temple gate and the percussion stage, but building the lions that was the most fun part about this set.

I just love how the lion heads were designed. At first glance, they really do look like lion dance heads, by the way, with every detail you’d expect, from the little horns atop their heads, to the flappy mouths and googly eyes. Upon closer inspection, you’ll notice that the ‘eyebrows’ are made from banana pieces, while the ‘ears’ are frogs!

Also, the legs are actually minifigure legs, which increases the poseability of the lions, especially atop the poles on the platform.

Overall, this is a really fun set not just to build, but also for the playability and also poseability of the lions themselves. And the best part is, you can combine it with the Chinese New Year Temple Fair to form one epic CNY scene! You can combine both sets together to make one epic CNY scene!

While Chinese New Year temple fairs aren’t that common an event in Malaysia, it is, however, often seen in towns and cities throughout China during CNY.

Priced at RM499,90, the centrepiece of this set is the ornate temple gate, an impressive structure that also includes some unique pieces, including some tiles with traditional Chinese patterns. The Temple Fair is the larger of the two sets.The ‘festival’ part of the set features four stalls with Lego versions of items you would find at a Temple Fair, from barbecue dishes to candy, toys, vases and dough figurines. There are also two plum blossom trees bearing CNY messages that adds to the festive mood of the whole set.

The set also includes an impressive 14 minifigures, and in a nice touch, even includes the same family that was featured in last year’s CNY Eve Dinner set.

As for the build, it’s not a complicated one – the temple gate itself was fairly straightforward, while the stalls are fun little mini-builds by themselves. What I liked most about this set is the variety of stalls they had, and the way it captures the festive mood of CNY with all the little lanterns, red packets, and the sheer number of minifigures to play with.

The Chinese New Year sets are available at all Lego outlets, Toys 'R' Us, and Lego's Lunar New Year Event at Mid Valley Megamall in Kuala Lumpur and The Mall, Mid Valley Southkey in Johor Bahru from now until Feb 2. For more information, visit Lego Malaysia or Lego Malaysia Facebook. Dear Thelma: Mother-son fight turns into cold war
Heart and Soul: My dad, the silent type
Heart and Soul: Absence makes the heart grow fonder
Heart and Soul: This kopitiam was Kampar's social centre in the 1960s
Help, I’m still afraid of the dark: Embracing the night for adults
Whether you like DIY or not, everyone needs these tools at home
James Dean: Life in the fast lane
How air quality is a major concern for cities around the world
#Star50: A look at Star Media Group's social initiatives as it celebrates its 50th anniversary this year
Is escaping the rat race a step back for your career?