The graffiti artist has been commissioned for corporate spaces across the United States, most recently Comcast.

Before muralist Jimmy McMenamin earned thousands of dollars for his artwork, he dug deep into graffiti culture and honed his technique for a decade by tagging freight trains in New Jersey, the United States.

Fast-forward to the present, and Jimmy Glossblack – as he’s known professionally – has expanded from his graffiti roots to become one of the Philadelphia region’s premier muralists, booking such high-profile gigs as three murals in the new Comcast Technology Center.

Glossblack, 36, has labuored on the refurbished North Philly basketball court sponsored by Meek Mill. He has created murals for Google’s corporate offices in New York, and showcased his skills in a commercial for the Gap, along with dozens of other clients.

He now requires a US$2,000 (RM8,300) minimum for a job and makes five figures for an elaborate mural. His client list includes the 76ers, Under Armour, Reebok, Puma, Lyft, NBAonTNT, Justin Bieber, Dietz & Watson, Pabst, Redbull, and Saks Fifth Avenue.

When corporate clients look for art, “his name pops up all the time”, said Claudia Vick, partner at New York-based Vick Art Advisors, who chose Glossblack for three pieces to inject some Philly attitude into the new Comcast centre. “His work with text really resonated with Comcast. The way he handles typography and script, he’s so talented.” The Comcast Tech Center is filled with art, such as this piece by Glossblack, which was painted freehand and composed in the moment on the day of the installation, and which includes a number of Philadelphia references.

His South Jersey studio is filled with bold images in various stages of creation. The walls are strewn with traffic signs. Piles of his artwork are stacked in the corners. Glossblack’s signature style is typography, which he says he developed in high school.

He dipped the tip of a thin paintbrush into a silky, cerulean mixture and carefully applied it to a wooden panel propped on a table. He was working on a collection of pieces for “Full Tilt, ” an art exhibition opening Nov 23 at Philly’s Works on Paper Gallery.

“I’m teetering the lines between graffiti, sign- painting and fine art, ” he said. “Obviously, lettering and dimension are important to my work. So I’m always figuring out better ways to do it.”

He grew up in Haddon Township, where he enjoyed fishing in Newton Creek for largemouth bass. While he waited for the tug of a fish, he took in the environment, uploading inspiration for the drawings in his sketchbook.

“I was always drawing, ” he said. “I remember making illustrations of the creek. I would try to imagine what the bottom of the creek looked like.”

After graduating in 2007 from Rutgers University with a degree in environmental studies, Glossblack worked in several roles with hopes of building a career in fish and wildlife or marine sciences.

But these years, he recalled, were also his busiest for graffiti, which he started while at Rutgers. Three times a week, Glossblack would paint freight trains with a group of friends.

“Freight graffiti has been around for years, ” Glossblack added. “It’s like subway graffiti in New York, but instead of travelling borough to borough, you travel and meet people in different states and Canada.” 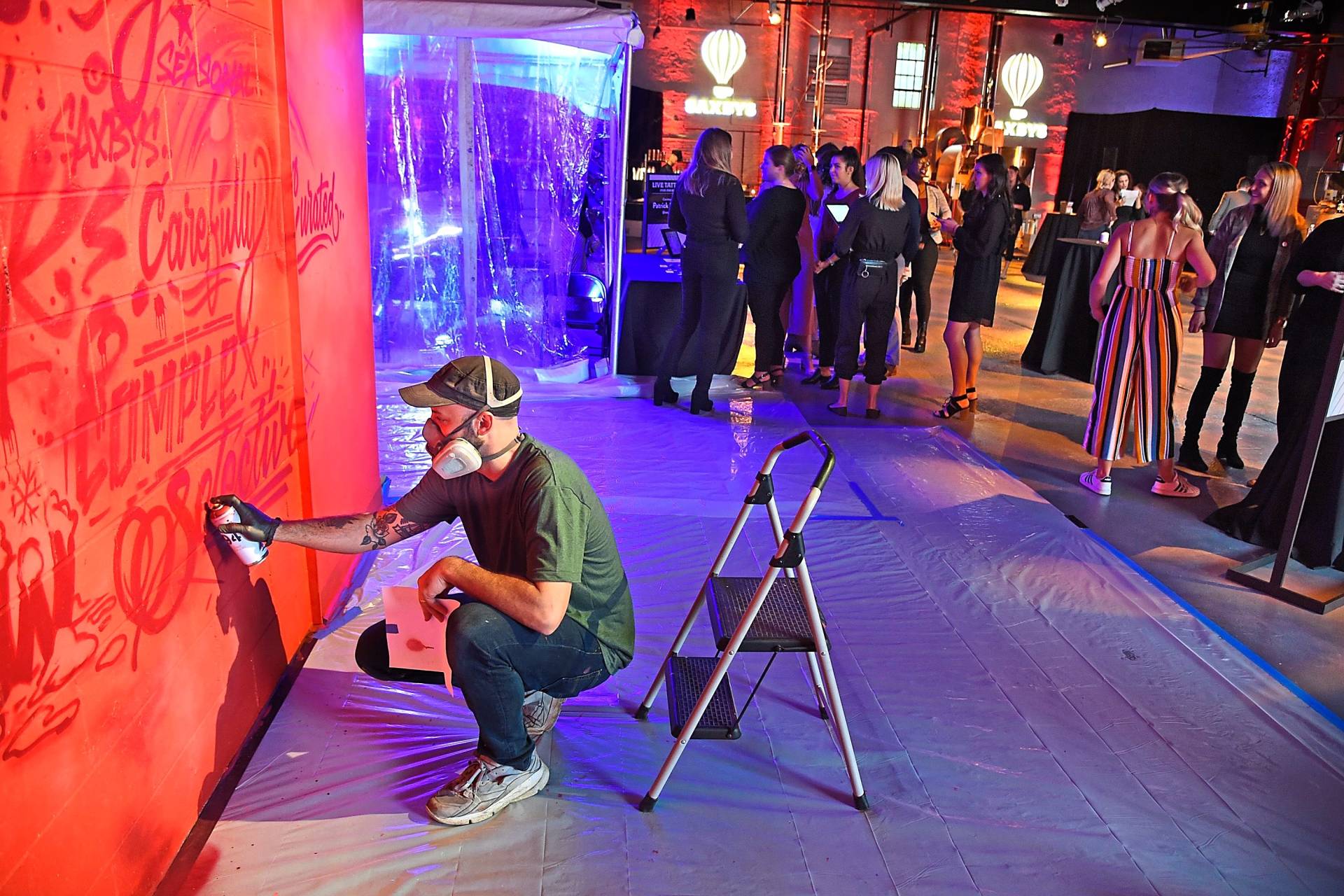 Graffiti writer Glossblack, who has done commissioned work around Philly, creating a wall live for a client on the opening of their first outlet recently.

Glossblack’s father, Michael McMenamin, is a former Philladelphia US customs agent who lectured his son on the potential risk of tagging. “I knew there was trespassing and destruction of property involved, ” the elder McMenamin said.

Years later, he also realised that his son’s time at Rutgers was “a training ground where (Jimmy) learned about his art”.

In 2015, Glossblack hosted his first solo showcase, at Urban Art Gallery in West Philadelphia. He was surprised by the turnout.

“It was nice to see so many family, friends and old clients come to support me, ” he said.

Glossblack considers himself an entrepreneur. In 2016, he left his job as an aquarium technician to pursue mural painting exclusively – not a leap of faith, simply that art was more lucrative by then.

Often, creatives – such as artists, musicians, or makers – develop their talent while working a more mundane job.

“Once they have an opportunity to monetise that skill or talent, it helps them become more business-minded, ” Williams continued. “They can begin to envision moving from a traditional employment arrangement where tasks are assigned. It creates an endless craving for independence in their work.” Glossblack working in his Barnsboro studio. He has expanded from his graffiti roots to become one of Philadelphia’s premier muralists.

Glossblack says he’s honest with every client about what he thinks looks good, but there are times when he gets pushback.

Managing feedback is a big part of Glossblack’s job as a muralist. He said that with most jobs, he wants to find the balance of meeting the client’s needs, but ensuring his aesthetic remains visible.

Glossblack is careful to make sure he spends time with his wife, Holly, and their two small children. His family, he said, is his biggest source of motivation.

“I’ll try to only work Monday through Friday from 9am to 5pm, ” Glossblack said. “And I paint every job like I’m painting my own house.” – Tribune News Service/The Philadelphia Inquirer/Brandon T. Harden