Bentley the American Bulldog is such a lovebug

In September, Kennedy (right) and Bobrow adopted Bentley (centre), the PSPCA’s longest-staying resident at the time. He’s the newest addition to the couple’s family, which also includes Butters (left).

After spending more than 1,000 nights inside a kennel, Bentley, a 45kg American Bulldog with a smile spreading from floppy ear to floppy ear, has finally shed his title of the Pennsylvania SPCA’s longest-staying current resident.

“I came home today and found him rolling over and over and over again on the couch, ” said Britney Kennedy, 32, who adopted seven-year-old Bentley with husband Doug Bobrow, 32, a month ago. “We’ve come to learn he loves any kind of soft fabric since he’s been living in a concrete cell for three years.”

“There was one day we couldn’t find him, and I thought maybe he was in the bathroom drinking the toilet water or scratching something, but he was just up there doing somersaults on our bathroom rug, ” chimed in Bobrow during a recent visit to their Graduate Hospital row house, Bentley’s new home.

Bentley was rescued by the PSPCA’s Humane Law Enforcement Team. His owner had abandoned him and he was found tied to a tree on a Monroe County property in Pennsylvania, the United States. After settling into the shelter’s Erie Avenue location, he remained reserved, and at times, intimidating. Most often, Bentley kept himself tucked into the back of his kennel, but occasionally he’d approach the front to growl at visitors. While he was quick to evoke fear, the shelter’s behaviour co-ordinators had an inkling that there was more to the burly white pup, a good-hearted nature that would’ve never been seen if he were kept kennel-bound.

So the staff started letting Bentley wander around the office area. Within a couple of months, his cuddly personality started to shine through, persuading the PSPCA to cement his stature as the unofficial office dog. During mornings and nights, he was free to roam, lending a smile and a heavy head to staff members who needed it.

“Bentley was as close to human as any dog I’ve ever met, ” said Mike Roth, 70, a weekly PSPCA volunteer. “His face is extremely expressive and he can read your thoughts. If he’s sad, you know, and if you’re sad, he’ll come right up beside you and start licking your face until you’re laughing hysterically.”

Unfortunately, while he warmed up to those he knew, begging for daily belly rubs, Bentley continued to showcase a distinctly different side of himself to visitors.

“Bentley’s fearful of meeting new people, so he didn’t exhibit super sociable traits, ” explained PSPCA behaviour co-ordinator Kayla Dorney. “If he did approach the front of his kennel, he’d end up barking, which is off-putting to most adopters.”

So Bentley endured, day after day, without a “forever home”, along the way wiggling his way further into the hearts of those closest to him. Often, staff would dress him in costumes, from Frida Kahlo to a triceratops to a cow where the greyish-brown spots dotting his ears and face blended in perfectly. Roth would regularly deliver cheeseburgers to Bentley, and sometimes bring him out on a car ride. Dorney would occasionally take him home for sleepovers. And all along the way, trainers spent hours teaching him skills: Ask for a paw, and Bentley delivers within seconds.

“What I saw was this lovebug and amazing companion dog, so it was tough to see him still there, ” said Dorney. “Six months is considered a long-term stay at a shelter, and so naturally it crossed our minds whether or not it was humane to keep him. But we just knew his future home was out there.” 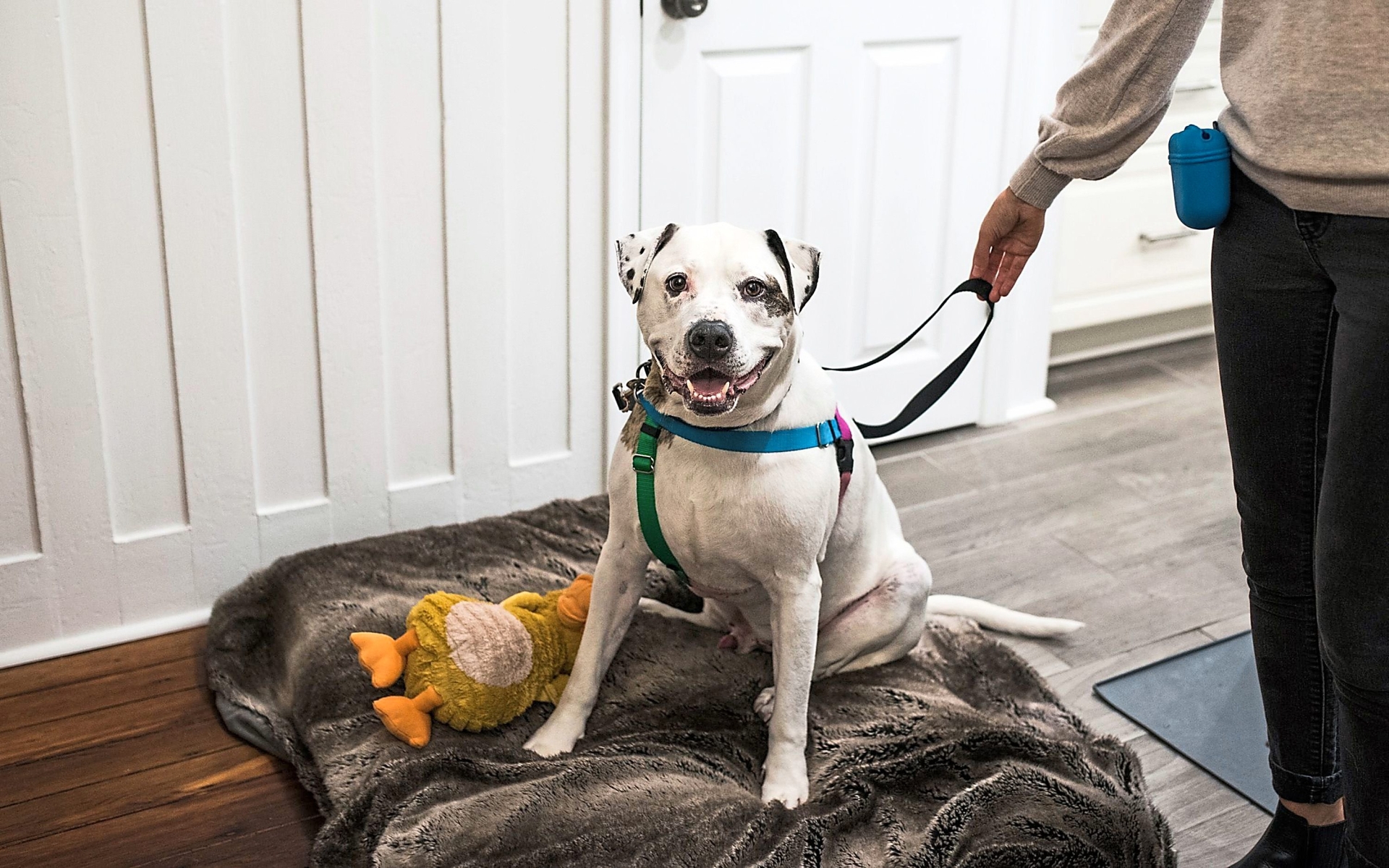 Bentley finally has a new place to call home, thanks to a loving couple in Graduate Hospital, Philadelphia, the United States.

So in April this year, PSPCA staff launched a weekly “Tuesdays with Bentley” campaign to share his story across multiple social media platforms. Several news stations featured Bentley, and in August, national nonprofit GreaterGood.org gave a US$10,000 (RM41,570) grant to the PSPCA, designated not only for shelter supplies but also for a makeover of Bentley’s kennel.

Little did Bentley know, while he was enjoying his brand new bed, pillows, and squeaky stuffed animals (his favourite), a couple was already considering his adoption. In July, Kennedy and Bobrow caught a video clip on Fox29 featuring the pup.

“We weren’t really looking for a new dog but had already set a rule for one in the future: A dog had to be at a shelter for at least three months before we’d consider it, ” said Bobrow. “Bentley fit the bill, so we decided to just go see him. He barked at us initially, but by the end of that visit, he was rolling around with drool flying out of his mouth, and it was clear he was just a big, happy dog.”

With a honeymoon planned in September, the couple decided they’d wait and see if Bentley was still there when they returned. If so, they’d bring him home.

Fast-forward a few weeks, and Kennedy and Bobrow were showing up to the PSPCA with their other four-legged family member, Butters, a female Pitbull-hound mix, for doggy introduction sessions. Fortunately, it was love at first site – especially for Bentley, who, Kennedy notes, is a little more interested in Butters than Butters is in him, often attempting to smother her with kisses. Now settled into his new home with people he trusts, Bentley still exhibits some fear tendencies, and for every guest who visits, a 10-plus-minute introductory routine is required. Anyone willing to coax Bentley with hot dog slices, followed by “good boy” approvals and pats on the head, is rewarded with ample face licks and cuddles. Once you win him over, it becomes easy to see how the lovable dog was able to win over so many individuals himself.

Walks also require plenty of hot dog nibbles. His favourite snack preoccupies him whenever a dog, cat, or child walks by – which is often every few steps. While Bentley requires patience, care for Bentley seems natural for the couple.

“Patience? I’ve actually never thought about it like that, ” said Kennedy.

The couple does acknowledge they’ve had to make some life adjustments, but Bentley brings a sense of lightheartedness to their home they wouldn’t trade for anything.

Besides, said Bobrow, “This poor dude was sleeping in a kennel at the PSPCA – which is a great organisation, but you shouldn’t be living there half your life. To wake up 45 minutes earlier so we can walk him before most other dogs are out is really just not a big deal in comparison to what he was dealing with.”

As for his human shelter friends, the sadness of Bentley’s departure is countered by feelings of overwhelming joy that he’s found a loving home.

“You’d put your arms around him, and he’d put his head on yours, and he just always knew how to make you feel good, ” said Roth, holding back a few tears. “He leaves a piece of him with everyone he touches – it’s hard to put into words, but he’s one beautiful boy.” – Tribune News Service / The Philadelphia Inquirer / Grace Dickinson