No distance too great to travel, to raise awareness of pet therapy

Jay Hamm with his two dogs, K Poppy and Chibby Choo, departing from the Jupiter inlet in Florida on Nov 1, 2019, to embark on their mission.

After four years of utilising his dogs Chibby Choo and K Poppy for pet therapy, Jay Hamm is taking his volunteer work on the road.

With the two dogs in a custom-built sidecar, Hamm rode off from the Jupiter Inlet early on Nov 1on his Pedego electric bike, planning to make it across the United States to Huntington Beach, California, before the end of the month.

He was trailed by a support bus loaded up with bedding, coolers, a paddleboard and other supplies, as well as a crowd of supporters there to send him off.

The 52-year-old man from Jupiter, Florida, is making the trek to raise awareness of the benefits of pet therapy and help people in need along the way. 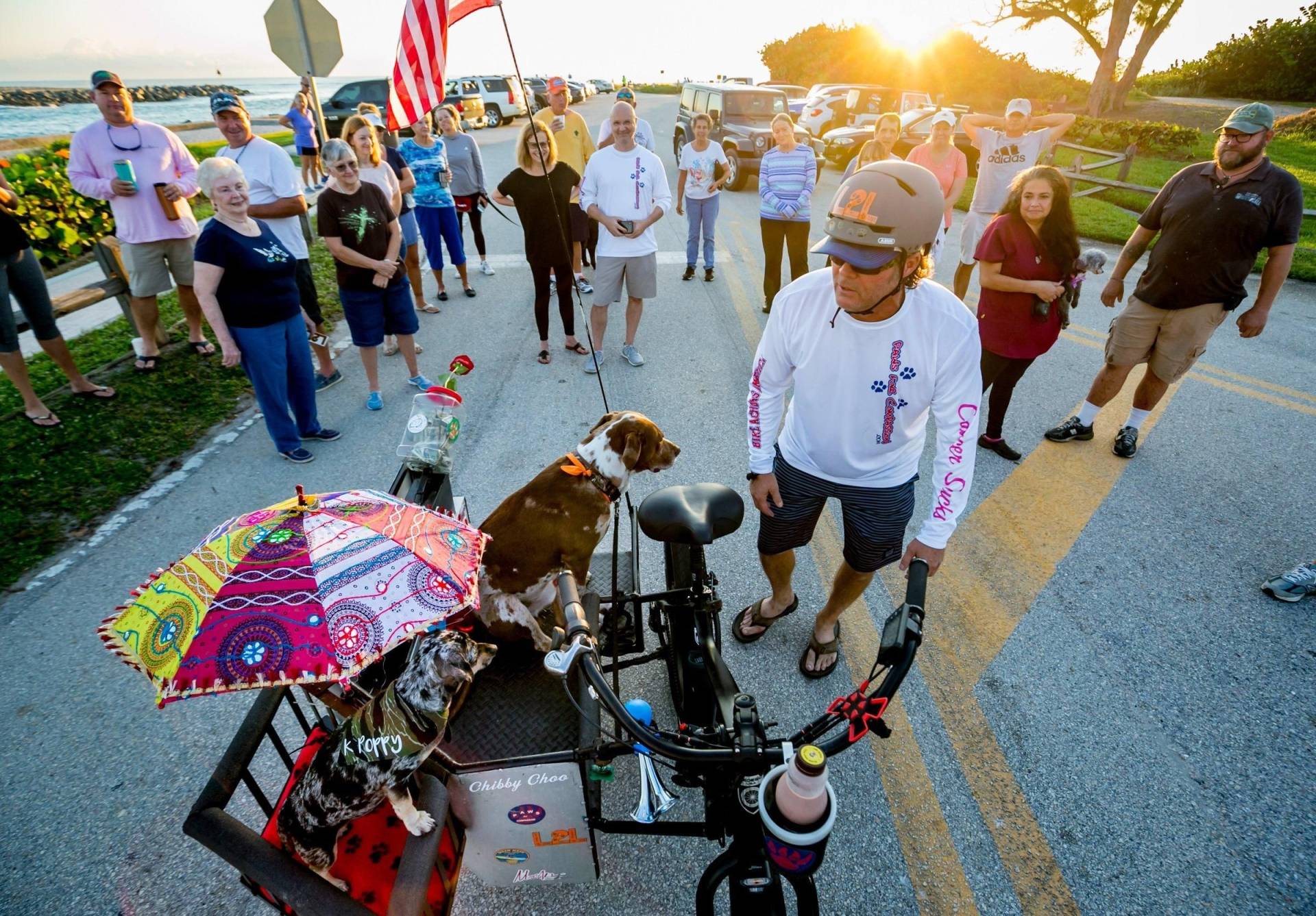 Jay Hamm said he witnessed firsthand the power of pet therapy when Chibby Choo comforted his sister who was dying of cancer in 2015.

He said he first witnessed the benefits of pet therapy when Chibby Choo, now six years old, comforted his sister, Tamra Williams, while she was dying of cancer in 2015.

“I tell everyone that was my God moment, my a-ha moment when God said ‘Do something with this dog. Go share the compassion in this dog’, ” said Hamm, the facilities director at First United Methodist Church Jupiter-Tequesta.

He had Chibby Choo, a Catahoula leopard hound, certified for pet therapy in 2015 and formed a non-profit, Paws for Compassion, to serve in that endeavour the same year. 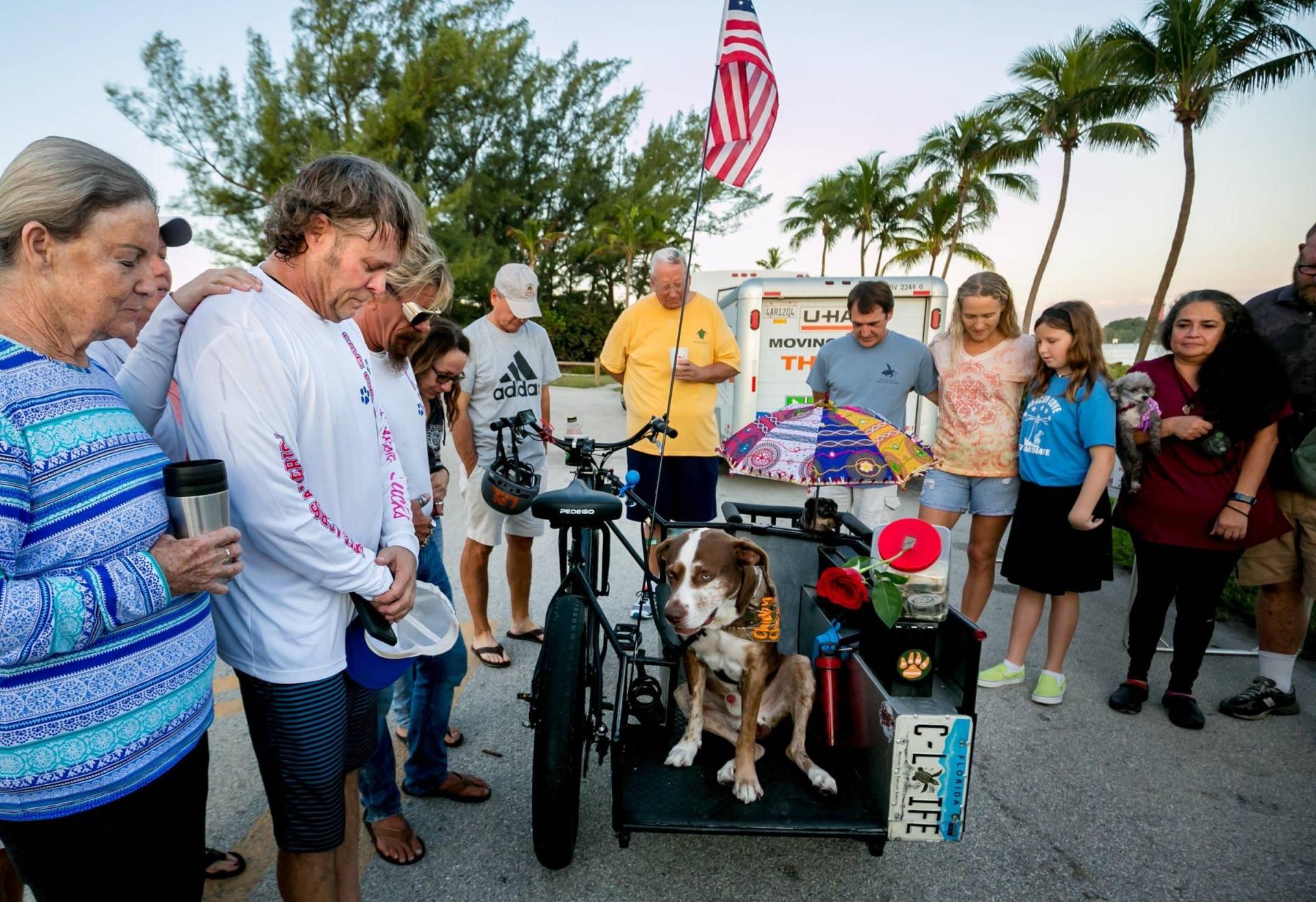 Supporters and well-wishers crowding around Jay Hamm and his two dogs before they set off on their journey.

Under the Paws for Compassion banner, Hamm said he’s taken the dog to volunteer at medical facilities in the area, including Jupiter Medical Center and Tequesta Terrace assisted living home. Though not certified in pet therapy himself, one-year-old K Poppy often comes along, too, Hamm said.

He also became a mainstay comforting kids in Parkland, Florida, after the 2018 shooting at Marjory Stoneman Douglas High School.

“My mission is to actually go do the visiting and be an advocate for this pet therapy world and get more people involved in it, ” he said.

“It’s just amazing what happens in that room when the dogs walk in, ” Spano said.

Spano, a retiree, will drive the bus and fill in on the bike if Hamm needs rest. He’s also Hamm’s hype man, with plans for a barrage of social media activity to promote the trip.

Once they’re back in Florida, Hamm said he intends to use the bus, which he bought through the non-profit last month, to promote the organisation and shuttle his dogs to areas of need around Lake Okeechobee.

Among the supporters who came to the inlet Friday for the sendoff was Jon Charles, who attends Hamm’s church.

The journey is indicative of Hamm’s passion for serving others, Charles said.

But Hamm wants to keep the focus away from him, and instead on his dogs.