Thelma (right) and Louise are helping to rid the Indiana Dunes National Park in Porter, Indiana, the United States, of non-native plants by eating them.

Scattered throughout the fiery autumn foliage at Indiana Dunes National Park, the United States, are green patches of Asiatic bittersweet, its yellow-orange fruit soon to split open with red berries, lending a holiday look to the woods.

But this invasive plant is better suited to Little Shop Of Horrors than any Christmas story.

Its snaking vines can climb at a rapid pace, enveloping and choking trees, and killing off plants below – a grim threat in one of the country’s most biodiverse national parks where native species thrive.

Chemical sprays and controlled burns have been deployed against invasive plants at the park for years. Now, America’s newest national park is turning to the unique talents of Thelma and Louise, goat half-sisters who were tasked this past summer with eating as much as they could in an overrun section where tangles of the woody bittersweet are as big as a fist.

Thelma and Louise worked out so well they could be back at the dunes next year, maybe with some reinforcements.

“They were good company, ” said Geof Benson, executive director of the Dunes Learning Center, which cared for the animals over the summer. “I think what we need is more goats.”

Thelma and Louise are part of a growing industry as people turn away from chemical options, according to Midwesterners in the goat rental business. Goats have helped out major electric companies by grazing under power lines, cleared beachfront camps along Lake Michigan and cleaned up backyard gardens. A few years ago, Amazon began renting out goats.

“More people are discovering that it’s just a lot easier to let animals do the work, ” said Green Goats owner Kim Hunter, who jokes she’s a “goat goddess” and has lent her Wisconsin herd to organisations like the Naperville Park District. “Sometimes, just to be funny, when I pass someone on their mower, I yell, ‘Get a goat!’ Life is too short to spend it doing the work that a goat will do.”

Thelma is a Nubian goat and the more mild-mannered of the pair. She earned the nickname Jar Jar Binks because of her floppy ears and mocha colour. Louise is white and smaller, part-Saanen. They were raised by hobby farmer Kyle Wilson, a steel company employee who’s happy to volunteer his animals for educational projects at the park.

The goats were chosen for their friendliness, he said. Thelma and Louise are about a year old, like to be petted and have a sweet spot for Duke, a horse on the Chellberg Farm near the spot where they spent their three summer months. 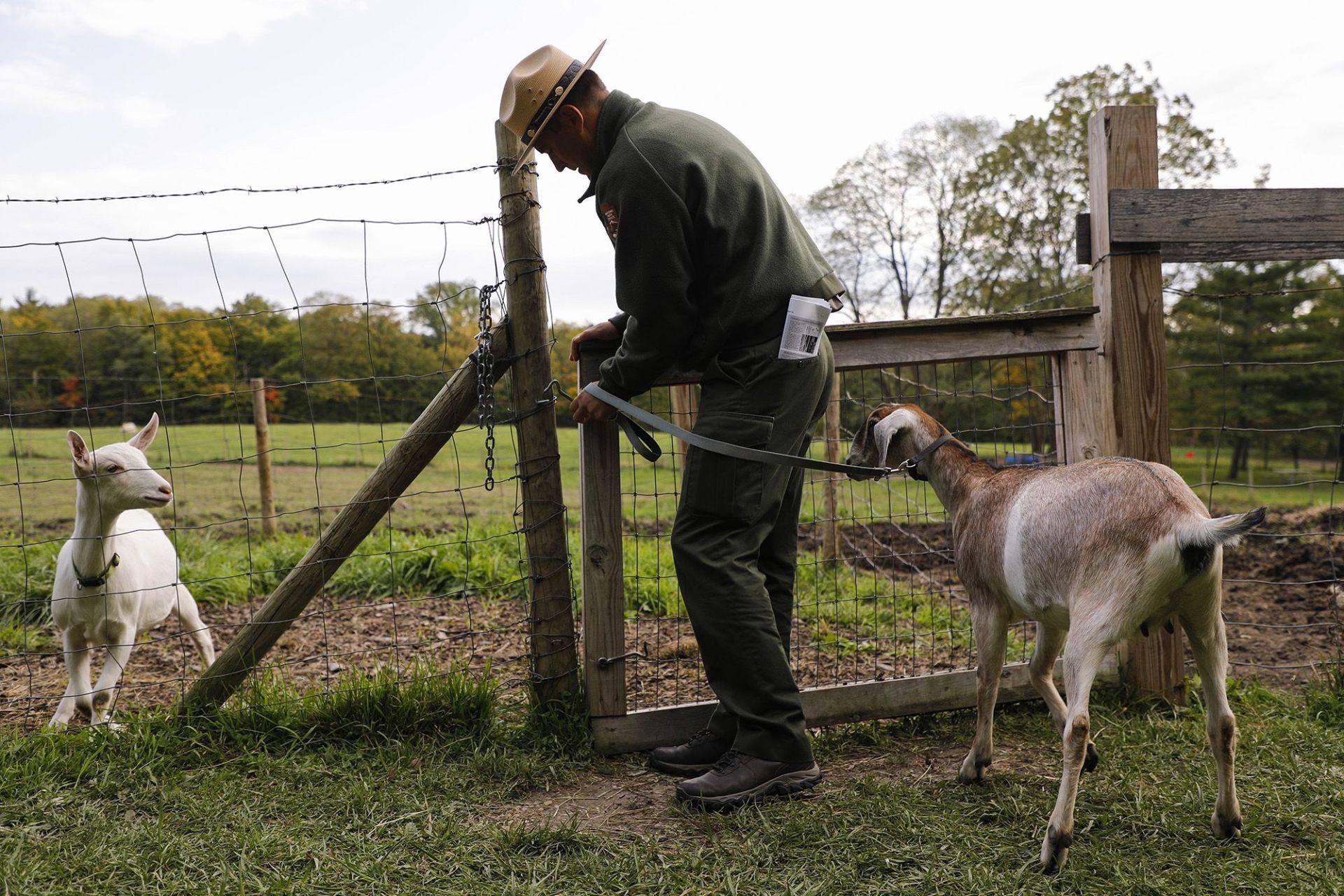 Park ranger Whitenack takes Thelma (right) out for a walk while Louise looks on, at Chellberg Farm at the national park.

Jim Whitenack, volunteer programme manager of the park, talked about the project as he walked the path to the goats’ summer home. Using the goats was a test to see if they could be contained by an electric fence, if they would eat problematic plants and – the main point – if they could get visitors to talk about stopping invasives.

One day while exploring, the goats ended up in an old, empty swimming pool built by US Steel. Thelma and Louise were hidden from view and caused a momentary panic that they had escaped. And there were some complaints from staff who worked near the enclosure who said they heard a lot of bleating through the open windows.

But the project was a success: The goats stayed inside the fence, ate a lot and offered a cute visual to kids learning about invasive species.

“A big part of it is just talking about the resources in the park, the biodiversity, all this we have to protect, ” Whitenack said. “And teaching (kids) to be good land stewards.”

A school group was set to visit the next day, and Whitenack said he would probably bring out a goat.

“Whether it’s a salamander or a toad or a goat or a chicken, yes, people like animals, ” said Benson, of the Dunes Learning Center. “They love the goats.”

The work site is past the Bailly Homestead, on land where US Steel employees once sent their kids to camp.

Camp Good Fellow operated from the early 1940s to the late ‘70s and offered kids a chance to learn about the environment and participate in outdoor recreation, Whitenack said.

In 1959, it was reported that 1,000 children used the camp that summer for “everything, from dissecting snakes to shooting on a firing range”. 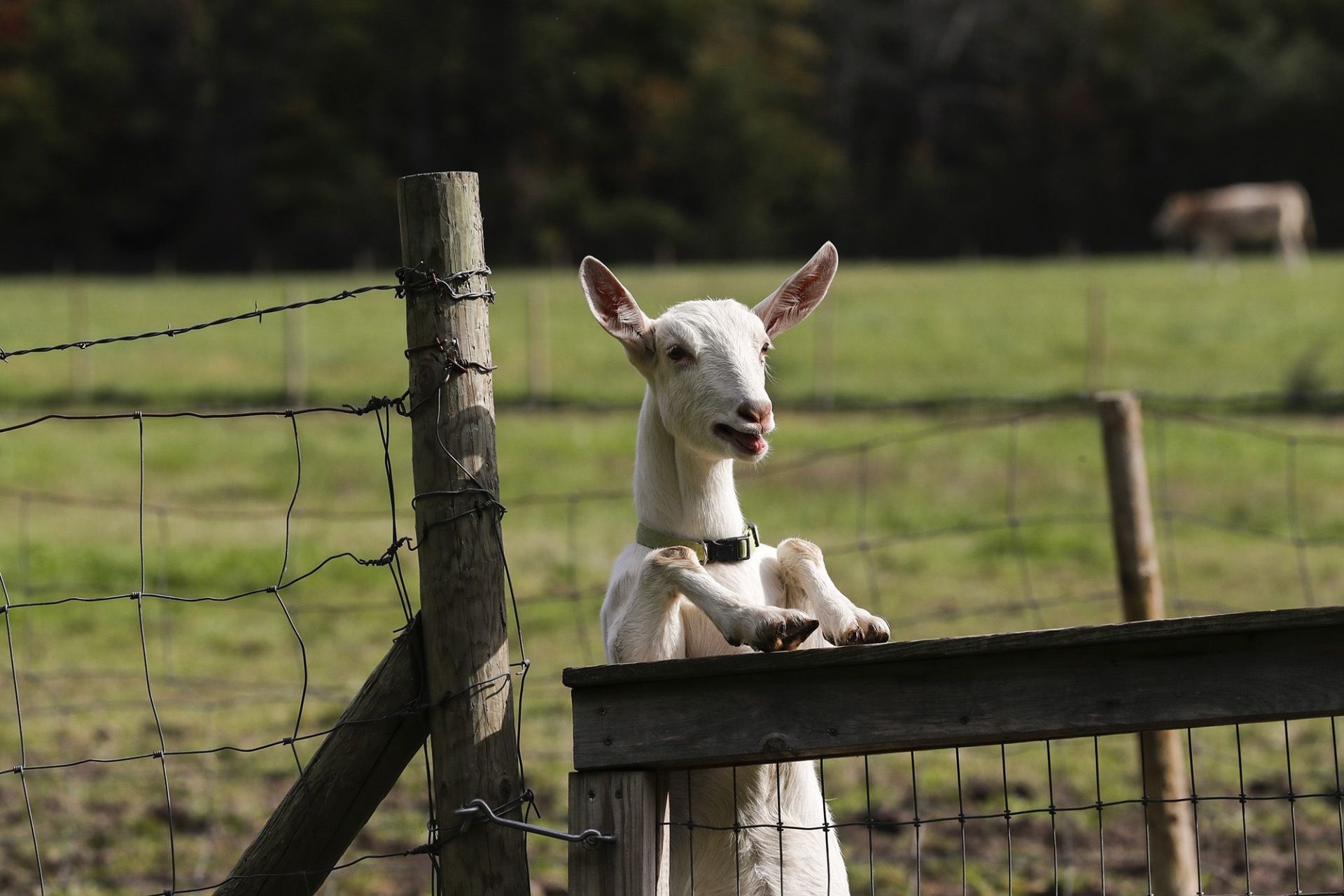 The park then purchased the land but didn’t do much with it until the 1990s, eventually establishing the Dunes Learning Center. “It used to be all manicured grass,” Whitenack said. “Then a lot of invasives came in, and it went horribly bad.”

Whitenack shared some photos from the ‘50s showing an aerial view of the camp with pristine, mowed lawns around courts and bunkhouses. Then he showed another shot from a few years ago with a slew of dead ash trees.

The fenced-in area where the goats worked covers about a 10,890sq ft that’s overrun with bittersweet as well as other invasives: multiflora rose, bush honeysuckle and garlic mustard.

Outside of the enclosure is a sign: “Goats at Work”.

The park has long focused on curbing invasive species, using everything from saws and tractors to chemicals and fire. Because of limited resources, park managers concentrate on rare habitats and frequently visited areas.

“It’s a tough battle, but we’re making pretty good headway on it, ” said Dan Plath, chief of resource management for the park. Still, he added, “We’re probably only treating 20% of the park if we’re lucky.”

Some of the invasives have been in the park for decades, but others have surged in recent years, he said. Typically, invasives are non-native plants that run rampant and disrupt the balance of an ecosystem.

As invasives take over, often arriving from boots, equipment or birds, one of the first casualties are rare plants. Loss of habitats for a host of species follows. Invasives can also harm humans and animals, worsen water quality and be costly.

The park is currently fighting against invasives like phragmites, hybrid cattail, buckthorn, Japanese knotweed and even wetland species like purple loosestrife. 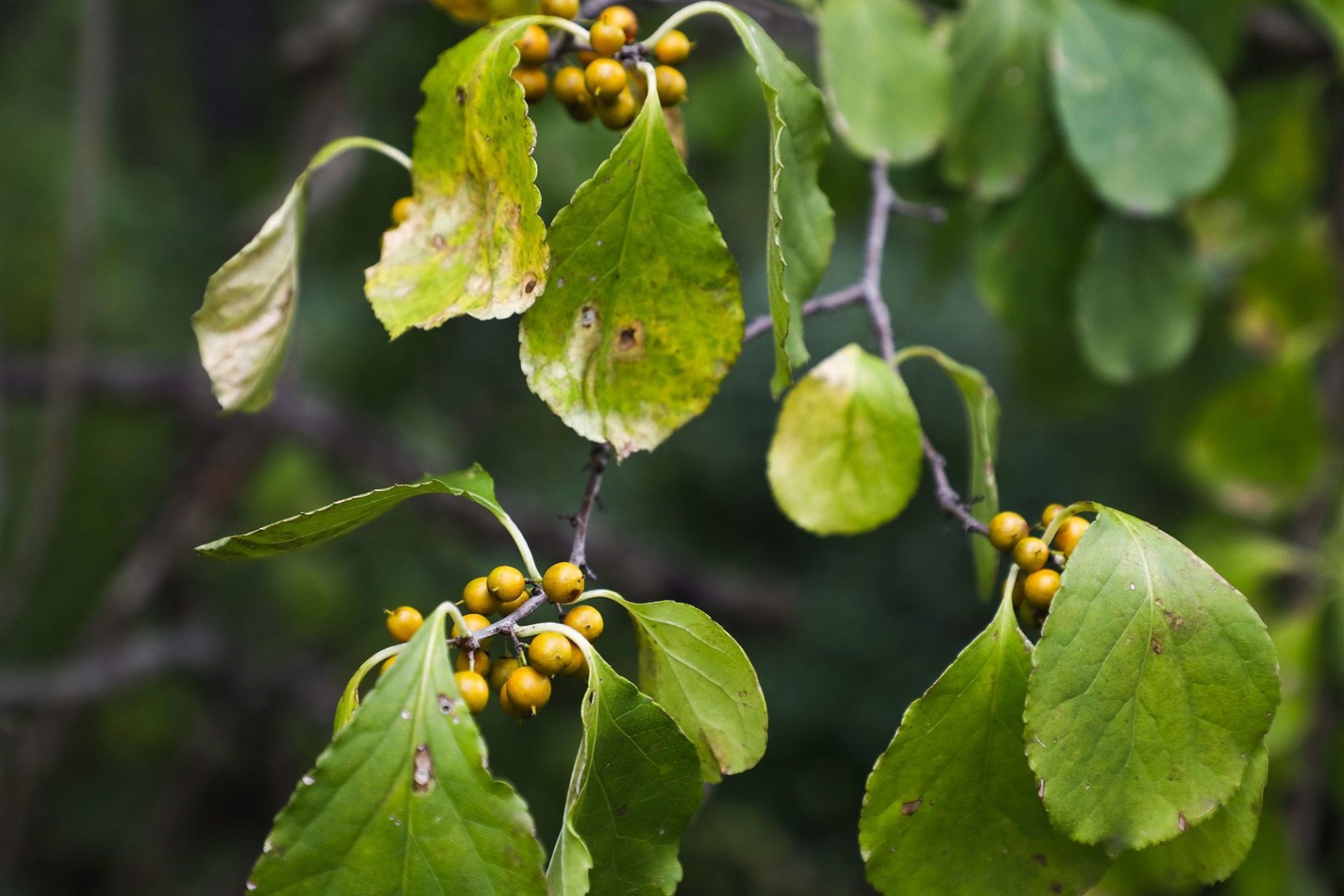 An Asiatic bittersweet plant found at the national park.

Asiatic bittersweet, found throughout the park, is a particularly bad one, Plath said. Some people add it to decorations that end up outside, and then birds and other animals eat the bright seeds, depositing them far and wide. Once bittersweet is established, it moves fast, growing in a year or two from a seed to sprouting plant, and then soon creating its own seeds, leading to exponential growth.

“They’re kind of pretty, but once you realise what it does, then it’s not so good, ” Plath said.

But goats don’t mind eating it. When invasives pass through goats’ digestive systems, the cycle ends.

Kim Hunter of Green Goats estimates a single goat can clear about 28sq m of an invasive like buckthorn in a day without chemicals or clippings. It can be expensive to maintain the herds and natural restoration takes time, but goats can be a cheaper solution for larger acreage. And each time goats return, it’s a more effective clearing process.

“Goats don’t fall down hills, goats don’t have workman’s comp, ” said Hunter, who has lent her goats to a contractor that had to mitigate invasives while building an electric generating station. “Goats don’t get poison ivy. They eat poison ivy.” – Chicago Tribune/Tribune News Service