Malaysian mothers are campaigning for equal rights to confer citizenship on their children who were born overseas. â€”Â Filepic

Malaysia is one of only 25 countries in the world – and one in only four countries in Asia – that still practises discriminatory citizenship laws.

“In principle, Malaysia has committed to eliminate all laws that discriminate women and, by right, Article 8 of the constitution states that gender cannot be used as a basis for discrimination,” says women’s rights activist Ivy Josiah who is the advisor to the Malaysian Campaign for Equal Citizenship led by the Foreign Spouses Support Group (FSSG).

“But we still have other laws like those to do with citizenship that discriminate women. These laws are old-fashioned and patriarchal, and have no place in our constitution.

“Malaysian women are studying and working overseas. Some have transnational marriages which they are free to do. They should not lose their rights because of this. For Malaysian men, these restrictions don’t exist.”

“Not many people realise that this citizenship issue affects the family unit, future family planning and the future of the children involved. It can be very disempowering to women and it really sets us back,” she says..

We need to make sure that people in the government and those who are processing these applications see how detrimental this is to families.”

Firdaus Husni: If Malaysia is serious about making gender equality a priority, we have to amend laws that discriminate against women.

Amending the constitution requires a 2/3 vote in parliament and so groups who are campaigning for change need to get the support of lawmakers from both sides of the house.

This, says Husni, could explain why it has been so hard to get this law amended even though the bar council and various civil society groups have been pushing for it for close to two decades.

“It takes political will. We are talking about the protection of mothers and specifically Malaysian mothers with foreign spouses who give birth overseas. Maybe to some politicians, this isn’t something that can bring them political mileage. Or maybe they just don’t see this as a priority,” says Firdaus.

Deputy Minister of Women, Family and Community Development Hannah Yeoh, who launched the campaign last week, promised mothers that her ministry was working with the foreign and home ministries to sort the issue out.

For the more than a dozen Malaysian mothers at the launch - all of them waiting for approval of their children’s citizenship - Yeoh’s words offers some solace but it isn’t enough.At a forum held after the launch, the mothers expressed their frustration, anger and hopelessness about their situation.

“It is ridiculous that I have to go through this just because I am women. I am a Malaysian. My child has a right to be Malaysian,” said one mother who has been waiting for three years for her application to be processed.

Some of the affected mothers pose with Yeoh at the launch of the Malaysian Campaign for Equal Citizenship.

Another mother shared a poignant anecdote about her son, a school athlete who cannot participate in national-level sports because he is not a citizen.

“My son asked me whether he would be allowed to be a Malaysian if he sang the Negaraku many times. He insists that he is an Anak Malaysia too. That really made me cry,” she recounted.

Malaysian mothers want citizenship for their kids born abroad to foreign fathers for it gives them better options should their marriage fail or they need to return home. Photo: 123rf

Another mother said, “It is degrading that even though I am a citizen, I have to beg for my daughter’s citizenship.”

Families are left vulnerable as a result of these discriminatory laws, says Bina Ramanand, the founder of FSSG that has been fighting for and assisting families with citizenship issues, including Malaysian mothers fighting for equal citizenship rights for the past decade.

“Mothers, their children, extended families are all trapped in uncertainty and their lives are in limbo as the application process can take many years and are often unsuccessful with no reason given to the mothers for the rejection,” points out Bina, the lead coordinator of the campaign, adding that the effect on families are psychological, emotional and financial.

“Mothers are just told to try again. They are told over and over again that they are not equal. That this is not their right. That their loyalty (to the country) needs to be tested. They are questioned about why they didn’t come back to deliver their child but this is not always possible

For the campaign to work, says Firdaus, stories of these mothers need to be told again and again. “There needs to be a human face to these stories,” says Firdaus.

“I would urge mothers who are going through this to keep telling their stories because if there is public awareness, there may be a bigger push for lawmakers to vote for change. Also, the people who are processing these applications need to know how lives are affected because of their work.” 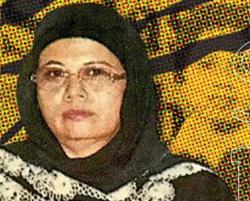