Rhinos at the Chitawan National Park in Nepal. Photo: Agoda.com

Leadner Biesenkamp, a student of biology from Germany, came to Chitwan National Park in Nepal recently to see the one-horned rhinoceros and the Bengal tiger. He stayed a week at the park but refrained from one of the park’s most popular activities – the elephant safari.

“I felt uncomfortable seeing four or five people riding on the back of an elephant,” Biesenkamp said. “It looked like the elephant might have had a hard time carrying all those people. I decided not to ride the elephant at all.”

For years, the elephant safari has been a mainstay of tourist attractions at Chitwan National Park. Riding on the back of a slow-moving elephant was one of the few ways that visitors could get a glimpse of the park’s elusive wildlife.

But lately, tourists, especially from Europe and the US, are loath to ride the elephants, owing to growing awareness about the distressing manner in which these animals, reported to be among the most sensitive and intelligent, are treated.

Biesenkamp engaged in the bush walk, paying US$25 (RM104). He sauntered around the bushes on the banks of the Rapti with two elephants – Lucky Kali and Samratgaj. “I don’t want to inflict any pain on the elephants,” he said. “I didn’t ride them but walked alongside them, I learned a great deal.”

“Most Europeans and Americans have almost stopped riding elephants,” said Tamang, who has been working as a nature guide for 25 years.

This decline in safaris has raised concerns among tourism entrepreneurs in Chitwan. They are currently discussing the effects it will have on Sauraha’s tourism and whether the service should be continued at all. 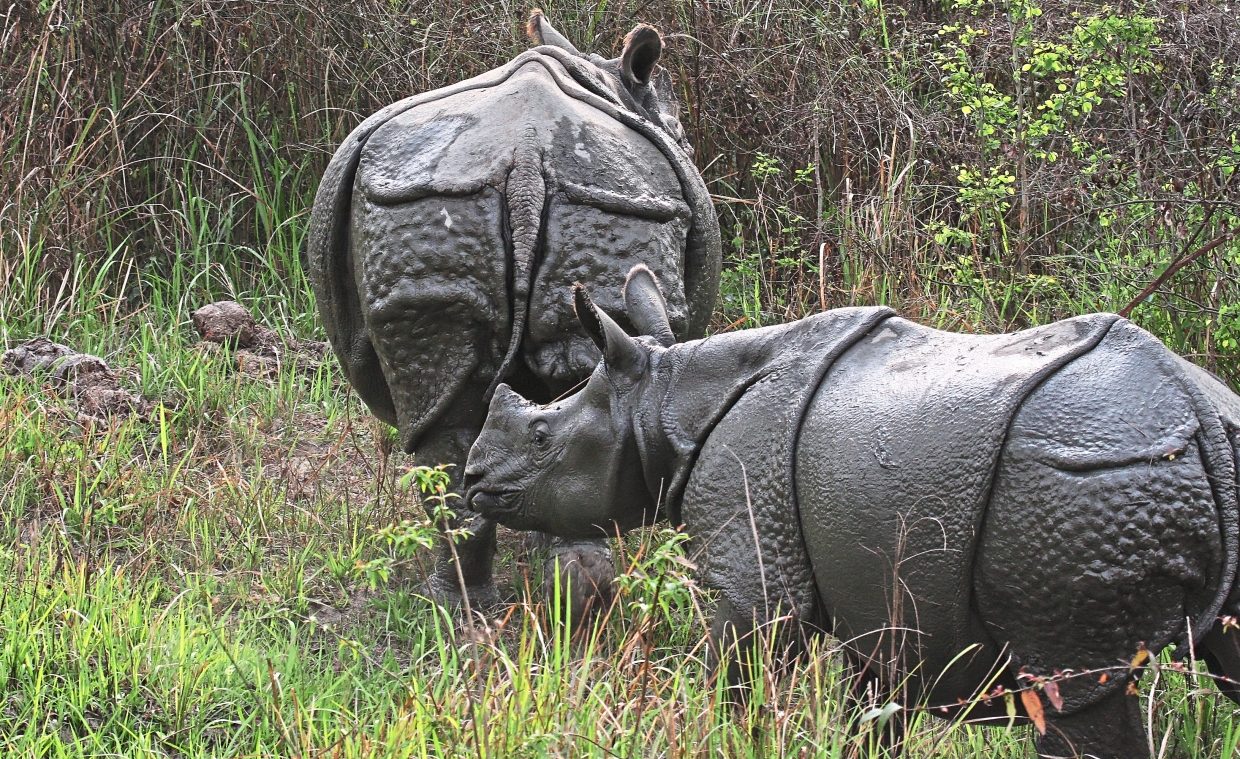 Rhinos at the Chitawan National Park in Nepal. Photo: Agoda.com

This fall in interest can largely be attributed to various international campaigns to put an end to elephant rides.

In December 2014, a number of Germany-based tourism companies, such as Pro Wildlife, AIDA Cruises, TUI Germany, Hauser Exkursionen and Geograf Exkursionen, agreed that the use of elephants in tourism was improper and issued a statement to that effect.

These companies regularly send their customers to Sauraha, according to Suman Ghimire, chair of the Chitwan Regional Hotel Organisation.

Several other organisations around the world have agreed with the Germans. Likewise, the Australian student travel agency STA Travel also decided to stop elephant safaris altogether. Several major tour operators in the Netherlands have followed suit.

This global discourse has triggered discussions in Nepal as well. The current dip in the number of clients in Sauraha is a ripple effect of those campaigns, say wildlife entrepreneurs.

In Nepal, elephant safaris were first introduced by the Tiger Tops Lodge in Sauraha, which was established in 1964. The lodge is no longer in operation in the park.

“Since 2016, all of the hotels under the Tiger Tops chain have stopped providing elephant safaris,” said DB Chaudhary, the general manager at Tiger Tops. “With the hotel that introduced safaris pulling out, tourists were discouraged even more.”

Tiger Tops’ decision to stop the service was a result of constant lobbying by animal welfare and wildlife conservation organisations. These organisations have long been pointing to the abuse of elephants in training and the manner in which they are caged and raised.

Young elephants are captured from their habitats and bound with chains, hurt physically and caged. This, according to German tourism companies’ statement, was “cruel” and an “atrocity” against elephants.

Elephants raised in such conditions can sometimes turn violent and take human lives. Furthermore, elephants used for safaris are often trafficked across the border; in Nepal, at least five elephants are trafficked every year, according to the statement.

The elephants are not provided with proper food and habitat and their movement is limited. Chaudhary said that it is precisely because of these reasons that they have searched for alternatives to using elephants in tourism.

“Tourists coming to our lodge do not go for safaris anymore,” he said. “They’d rather observe the elephants and their daily routine.”

Tamang admitted that there was a time when elephants were treated inhumanely, but things have changed now. “The elephants are now provided with good food and are kept in good conditions,” he said.

In Sauraha, 57 elephants are currently used for safaris, according to data from the United Elephants Safari Cooperative, the body that governs elephant safaris.

Rishi Tiwari, the chairperson of the cooperative, also said that the elephants are treated well. “It’s probably because tourists from Europe and the US love animals that the number has dipped,” Tiwari said. “We have never treated animals badly. We take care of their hygiene, food, and rest.”

Other tourism entrepreneurs believe that there is an ongoing attempt to shut down elephant safaris in Nepal. Suman Ghimire, the chairperson of the Regional Hotel Association, Sauraha, said that tourists are being supplied with false information.

“There is a group actively cracking down on the business of elephant safaris globally,” said Ghimire. “This has affected tourism in every country where elephants are used in tourism.”

With travel websites such as TripAdvisor banning ticket sales for attractions involving physical contact with wild animal appealing to tourists to refrain from safaris, Ghimire envisions a grim future for his business.

“There is a risk that the elephant safari service will stop completely in Chitwan,” he said. “What kind of an effect will that have on Chitwan’s tourism?” Each year, Chitwan receives over 200,000 tourists, 70% of whom are foreigners.

Wildlife conservationists, however, believe that this decline is a good thing for the health and well-being of elephants, and that the safaris will have to stop eventually.

Baburam Lamichhane, executive investigation officer at the Sauraha-based National Nature Conservation Fund, said the nature of wild elephants and domestic elephants is basically the same, with both demanding an equal amount of care.

“It is imperative that both are treated the same way,” Lamichhane said. “If we can enjoy watching the rhino, why can’t we do the same with elephants? It’s not that we are asking that elephant safaris be stopped today or tomorrow. But as society progresses, it will stop some day.”

Lamichhane believes that stopping elephant safaris will not mean that tourist numbers will decrease. In fact, activities like bush walks and spending a day with the elephants are becoming more popular.

“If that indicates anything, it’s that the model of elephant tourism should change,” said Lamichhane. – The Kathmandu Post/Asia News Network