When it comes to smells, women have the nose for it

As men have a less sensitive sense of smell, they are less able to detect the odour of smelly clothes, as seen in this filepic.

It may not be the men’s fault they can’t smell stinky laundry, but now the women can say, “I told you so.”

Whether it’s a tussle between husband and wife or mother and son over dirty clothes or smelly shoes, women may seem to have a stronger opinion about things that smell in the house, be it fragrant or fetid.

That’s because science is beginning to reveal that there is a difference in the way men and women perceive the five senses.

Here’s one theory on this.

While biology does pay a role, Dr Marcia Pelchat, a sensory scientist who analyses taste and smell at the Monell Chemical Sciences Center in Philadelphia, United States, believes that there is a societal and psychological aspect too.

According to Dr Pelchat, women may “actually have more experience with odours and flavours, and that may increase their sensitivity or their ability to process these things”.

This makes sense as women have traditionally been the ones to do the laundry, cooking and cleaning.

They are more in tune with precise olfactory nuances, allowing them to detect when food has gone bad or when a bathroom has mildew.

It’s just a theory, but studies do back up the idea that women have a better sense of smell than men.

In a lab setting, Dr Pelchat’s colleague Dr Pamela Dalton and their other colleagues observed men and women being exposed to various smells and the results were not only enlightening, but quite surprising.

What this means is that the female participants of the study were able to detect an odour at a concentration that was 100,000 times less than what they had originally needed at the beginning of the study, after having smelled that odour multiple times.

The majority of male subjects, on the other hand, barely showed any changes in their ability to detect the odour.

How can there be such a massive disparity in the way men and women detect sense of smell?

Let’s take a quick look at how our olfactory system works.

Our brain has two types of cells: neurons and glial cells.

Women are more sensitive to smells because they have traditionally been the ones to do the laundry, cleaning and cooking in the household, thus providing them with plenty of experience with various scents. — KRT

Neurons are the more important type because they play a larger role in transmitting information via electrical signals.

Smells are first picked up by receptors in the nose, which then send out messages to the brain via the olfactory nerve.

The first stop in the brain for information about smell is the olfactory bulb.

As it turns out, the olfactory bulb in women have far more cells on average – 16.2 million – compared to men, who have about 9.2 million on average.

This biological makeup was confirmed in a 2014 study published in the journal PLoS ONE, where observation of post-mortem brains found 43% more cells and about 50% more neurons in the olfactory bulbs of women, compared to men.

In the words of the study’s authors: “Generally speaking, larger brains with larger numbers of neurons correlate with the functional complexity provided by these brains.

“Thus, it makes sense to think that more neurons in the female olfactory bulbs would provide women with higher olfactory sensitivity.”

What they mean is that while it’s not a guarantee that the extra cells are the key reason for women’s superior ability to smell, but it’s a good sign that they might be.

Having a keen sense of smell offers evolutionary advantages like mother and child bonding in the initial post-birth period and in the selection of a potential mate.

It’s with that greater sense of smell that women are more likely to detect dirty items around the house that could become a source of harmful bacteria.

And it’s not only the smell sense that is different between women and men:

Smell and taste influence each other, so it’s reasonable to deduce that women could have more sensitive taste buds than guys.

A study from Yale University in the US found that women’s tongues have more taste receptors – in fact, 35% of women compared to 15% of men are “supertasters”, a term coined by the University of Florida’s Dr Linda Bartoshuk, a professor of physiological psychology.

Males and females do not exhibit any notable differences in hearing ability at a young age, but a Johns Hopkins study from 2008 found that men are more likely than women to lose their hearing by up to five and a half times.

Researchers speculate that lifestyle factors, such as noise exposure, cardiovascular issues and smoking, are the main reasons for this hearing loss.

Also, another study concluded that women, regardless of age, have better hearing at frequencies above 2,000Hz, even though their hearing is diminished at lower frequencies between 1,000-2,000Hz.

A 2009 study published in the Journal of Neuroscience noted that people with smaller fingers had more precise tactile acuity, or a more accurate sense of touch. Women, who are universally smaller in build than men, can rejoice that their delicate fingers possess this advantage.

The receptors on smaller fingers tend to be more concentrated in a small area, and thus, able to detect more types of stimulation. To be fair, this isn’t really a gender thing, but a matter of physical build. Men who have small fingers will be more touch-sensitive too.

Those with larger hands tend to be less sensitive to touch than those with smaller hands. Photo: Ida Nerina

Have you ever had to try and explain the difference between teal and turquoise to the men in your house, and the conversation hit a dead end?

This is why we ask our female relatives and friends when we want a tasteful and honest opinion about wall paint and dress colours.

A City University of New York study from 2012 found women to be the better distinguishers of subtle differences in a colour group.

Men tend to be prone to colour blindness too, which can be attributed to genetics.

There is one advantage that men have over women when it comes to sight: men are able to detect unexpected movements and process images that are changing rapidly, which was especially desirable during hunter-gatherer times.

Now that we are aware of how differently men and women operate when it comes to our five senses, it’s all the more reason to think first before making accusations about not throwing out bad food or sending the laundry down to be cleaned.

Regardless of gender, it’s best to be respectful of each other: trust mum when she says something smells bad and believe the guys when they claim to be unable to smell anything.

Maintaining hygiene shouldn’t be just when things become smelly, it’s a good habit for your boys to clean up after themselves daily and that’s what they should focus on.

And don’t forget, ladies, if your guys don’t believe that women have more superior senses, have them read this article!

When it comes to smells , women have the nose for it 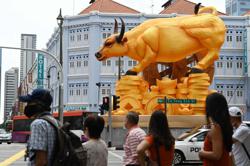