Beautiful corals in waters off Pulau Tioman, where the reefs are considered to be in good condition overall, with 66.36 coral cover, which is above the ﻿average 54.21 for reefs of the Sunda Shelf region. — Reef Check Malaysia

Brought together by their shared passion for marine science, conservationist couple Alvin Chelliah and Chen Sue Yee moved to Pulau Tioman from the Klang Valley to be part of an important project that would transform the livelihoods of the islanders as well as increase the ecological resilience of the island’s coral reefs.

Chelliah, from Kajang, and Chen, from Cheras, first met while pursuing their undergraduate degrees in Marine Science at Universiti Malaysia Sabah in 2006.

The couple – both 32 – also earned their Master’s degrees in the same field before joining non-governmental organisation Reef Check Malaysia (RCM) in 2011. They relocated to Tioman from Kuala Lumpur in 2014 after being appointed programme managers of the “Cintai Tioman’’ (Love Tioman) project aimed at boosting the resilience of coral reefs around the island by reducing local impacts. (Main image above shows an RCM volunteer diver checking the health of corals in Tioman waters. Photo: RCM)

Happy family: Chelliah and Chen with their son Ray Samudra.

At an interview held during a media trip organised by RCM, Chelliah says that the transition from marine scientist to grassroots conservationist was difficult at first because it required constantly communicating with people, as opposed to just dealing with raw data and statistics.

Other than that, the duo initially faced resistance from the local community while trying to raise awareness of their project due to their perceived inexperience and status as “outsiders”.

“The science part is easy. The challenging part is working with different people who have different ideas, who come from different backgrounds and have different ways of living and thinking.

Chelliah demonstrating how to use the glass crusher to turn glass into fine sand.

“We learned to reconcile these differences through trial and error. It was tricky because we are not trained anthropologists after all,” he says with a laugh.

For Chen, who describes herself as a reserved person, the experience of running the project has allowed her to come out of her shell.

“We live among the locals and attend their birthday parties as well as weddings. They have come to accept us as part of the community and eventually opened up to us,” she relates.

Chelliah and Chen tied the knot in 2015 and now call Tioman home. They are raising their seven-month-old son, Ray Samudra, on the island.

Having developed strong ties to the island, Chelliah says it is all the more important to have islanders participate in the project, as the long-term purpose of Cintai Tioman is to empower the local community to manage its own marine resources.

Born-and-bred islanders Mohd Shahir Yaman, 29, and Norhasnieza Razali, 25, were recruited to be part of the team in the roles of assistant programme manager and community liaison officer, respectively.

The reef rehabilitation mould made out of fine sand produced by the glass crusher. Once lowered into the water, corals will begin to inhabit the space.

Mohd Shahir was pursuing a Master’s Degree in Land Surveying at a local university a few years ago and returned to Tioman after his father fell sick. He joined RCM in 2015.

He believes one way to inspire locals to pick up enviromentally-friendly practices is by setting examples.

“They were suspicious at first seeing degree-holders collecting garbage. But eventually they were moved to do the same. They now actively participate in our initiatives.

“It is important to remind the locals why tourists want to visit Tioman. The island is our valuable asset, and that is why we have to take care of it,” Mohd Shahir explains.

Mohd Shahir (left) and Norhasnieza are islanders who have taken up the challenge to continue the efforts of the Cintai Tioman programme.

Accounting graduate Norhasnieza, who joined RCM in 2016, says she too has witnessed positive changes in behaviour among the locals who have been exposed to the Cintai Tioman programme and are now familiar with the faces behind the project.

“Before this, they would shun us when we told them we are from an NGO. To them, the only thing that mattered was running their businesses, and they wanted to do so without us meddling in their affairs,” she says of her experience approaching resort operators to participate in the Asean Green Hotel Standards assessment.

Her resilience has paid off, as 55 out of 72 resorts on the island have agreed to be assessed by RCM.

As of now, RCM has trained nine local islanders in the Tioman Management & Conservation Group (TMCG) to focus on the direct impact of human activities on coral reefs, such as removal of ghost nets tangled on reefs, coral predator monitoring and removal, as well as oil spill clean-ups.

They have also been trained to assist with reef rehabilitation, maintenance and site monitoring, mooring buoys replacement, rapid response, and training of snorkel guides.

RCM and the conservation group are recognised by Tioman locals as first responders and/or resources for marine-related issues or emergencies.

The organisation has also implemented solid waste segregation which has been adopted by local residents and businesses. This initiative has recorded a collection of recyclable items comprising 4,600kg of plastic, 5,497kg of aluminium cans and 182kg of batteries.

To date, it is estimated that the project has directly reduced waste by 11.52 tonnes and even more indirectly as two local islanders have established their own recyclables collection businesses with a crusher sponsored by Yayasan Sime Darby for RM20,000.

The machine crushes glass into fine sand that can be used for construction, as well as to create moulds for reef rehabilitation.

RCM general manager Julian Hyde says after years of hard work and persistence, the team is now able to get locals actively involved in marine conservation.

Additionally, the reefs in Tioman are considered to be in good condition overall, with 66.36% coral cover, which is above average for reefs of the Sunda Shelf region (54.21%).

“We established the TMCG and introduced recycling programmes. We are selling recyclable items out of the island, that used to be burned in incinerators. Now that they can be recycled, they create value.

“The next phase of our project would be to build skills among the community so they can take part in management, start their own businesses and play a bigger role in the management of these resources,” Hyde says.

The project was made possible with Yayasan Sime Darby committing a total of RM600,000 from March 2014 to February 2019 for Cintai Tioman.

“You can’t preserve the reefs of Tioman without working with the local community, and this is where RCM has been so successful.

“I have seen them working and training around hospitality to provide jobs for locals, so instead of them depending only on fishing for livelihood, they have alternative sources of income.

“We have seen them (locals) working in hotels, and also participating in initiatives to clean up the island,” she says.

For more information on Cintai Tioman, go to reefcheck.org.my/cintai-tioman/about. 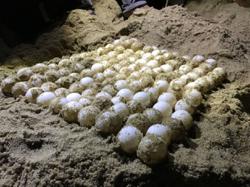