Rue de Bernadac (right) sharing a tip on sitting positions in one of his workshops. Photo: Twitter (@GuillaumeRue)

Did you know that it is easier to sit down gracefully when you place one foot slightly behind the other?

Or that when you leave a roomful of people, the last thing that they should see is not your back?

Ask French social etiquette professional Guillaume Rué de Bernadac and he will gladly tell you why.

Rué de Bernadac is the president of the Académie de Bernadac, an etiquette school located in Shanghai, China.

The graduate of the Audencia Business School in France went to China in 2011 to do an exchange programme after completing his Master in Business.

He studied business at Tongji University in Shanghai, where he developed a passion for China’s age-old culture. 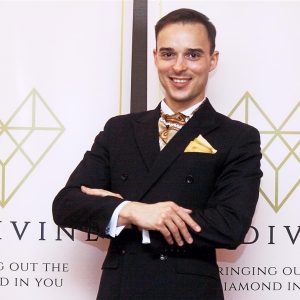 Good etiquette is to give the best of yourself, says Rue de Bernadac. Photo: The Star/Intan Syuhada

So how did his career in etiquette begin?

It can be traced back to his grandmother, who, together with her father and uncle, were private tutors at the royal courts of the King of Morocco from the 1920s-1960s, where they taught etiquette to the king’s children.

“It was in China that I got the idea to continue my family tradition because I was pretty amazed by the difference of behaviour there.

“When I went back to France after China, my grandmother told me that when she was a young woman in Morocco, people were also having questions about how to behave when they travelled abroad.

“So that is how I got the idea to mirror what they were doing at that time to today’s world. I am not teaching people how to behave like in the 1920s, no, but how to behave in modern days,” said the well put-together 31-year-old, with a smile.

After working a few years in the luxury goods and beauty sector in Paris, Rué de Bernadac returned to Shanghai in 2014 to start the academy. 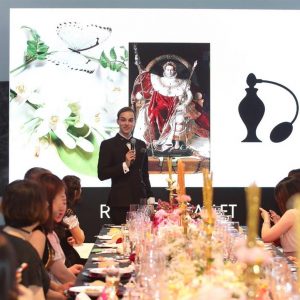 An etiquette training session on how much perfume is too much. Photo: Twitter (@GuillaumeRue)

“The first thing my grandmother said to me when I told her I wanted to do what she did was, ‘What you need to learn, beyond knowledge, is how to teach it and how to make it (relevant) to today’s world’,” he recalled.

Rué de Bernadac subsequently spent one year surveying the markets in Europe, the United States and Asia, and what the Chinese market would expect from him and the academy. He then developed classes tailored for the needs and expectations of the Chinese.

“Individuals who are keen to learn are always those who often travel abroad and have experienced different cultures. They know that they are successful in China but if they want to be successful abroad, they may have to learn other ways of doing things. 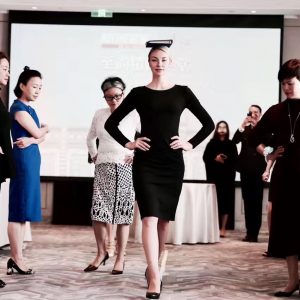 “What I want is to give them keys (on how to deal with) each situation, and to never lose face, depending on who they meet and the country they are in,” said Rué de Bernadac, who speaks French, English, German and Mandarin.

Having a passion for Chinese culture also gives him a better understanding of his clients.

“I love Chinese culture, and generally Asian culture, because it’s such an old civilisation and I have been learning a lot from it. I am amazed by modern Chinese today, who are changing and learning so fast.

“The simple fact that people in Asia who come to my classes are so willing to learn all the tips is already, for me, proof of a great, open mind, and I wish Europeans can embrace this change, too,” he shared.

Why is etiquette so important in today’s society and is it still relevant?

“More than ever. Etiquette and politeness make social relations easier. Etiquette is to give the best of yourself, to please the other party,” he stressed.

A three-day course entitled Elite Social Etiquette will be conducted by Rué de Bernadac from April 27-29, from 10am-6pm at the Sheraton Petaling Jaya Hotel. The course is organised by Be Divine, a platform that provides a series of courses ‘geared towards refinement in women’. Elite Social Etiquette will cover elite business and social etiquette, high society dining etiquette, elegant and confident deportment, the fundamentals of wine etiquette, elite dress codes and make-up, and afternoon tea etiquette. The course will be conducted in English, with Mandarin translation. The fee of RM6,800 includes lunch and afternoon tea. For more information or registration, e-mail info@bedivineasia.com or call Justine at 012-382 5292.