Qingming: Dos and don’ts of 'tomb sweeping' day for the Chinese 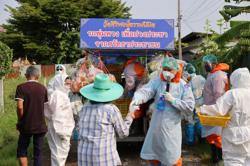 Have you heard that you must take a bunch of jingling keys with you to Qingming prayers? Has anyone told you to visit the cemetery with coins in your pockets? It's believed that the keys and coins will help you find your way home, so that you don’t get lost or stranded.

Above all, the belief is that you must first worship the Earth Deity (Tai Pak Kung in Cantonese) before making offerings to the dearly departed. If you fail to do so, you will have trouble finding your forebearers’ graves.

Qingming, or Pure Brightness Day which falls on April 5 this year, is Tomb Sweeping Day for the Chinese. They pay respects to the dead by visiting their burial grounds and burning offerings. It's an important day in the 24 solar terms on the traditional Chinese calendar.

“The Chinese observe this ritual to show our respect and gratitude to our ancestors or loved ones,” says feng shui master Jessie Lee. Qingming, an act of filial piety, is an occasion for family members to gather in remembrance of their forefathers.

Loh says some families may need to visit graveyards in different locations to pay their respects, so they don't have to stick to a particular day within the Qingming period.

Though there might be clashes for those born under certain zodiac signs, Loh says they can still pray at the burial site . But they should not to be the first to burn joss sticks or light candles. They should be the last person to do it.

Even if you don't observe this, Loh says there's little need to worry as “no major incidents will befall them”.

But he says Chinese families visiting the cemetery to pray for blessings should inspect the tombs for damage. In yin (burial) feng shui, it's believed that the condition of a grave site and its surrounding can affect a living descendants’ health and wealth. Many Chinese families will take prompt remedial actions to repair cracks on the tombstone to protect themselves.

Confucianism emphasises treating one's parents with filial piety. Loh says it’s important to bring a few of their favourite foods as an offering. For example, if the deceased wasn't vegetarian, don't bring vegetarian meals to the burial place.

However, “if you would like to accumulate merits for the departed, it would be good for you to become a vegetarian,” Loh says.

We asked Jessie Lee to answer a few common questions about the dos and don’ts of Qingming.

The transition period between Spring/Vernal Equinox (March 20) and Rain Grain (April 20) is a suitable time to observe Qingming. Most people observe the recommended period of performing their Qingming ritual two weeks before or after the actual day of April 5 (March 26-April 19) or 10 days before and after April 5 (March 22-April 15). So, expect busier traffic on the highways especially during weekends when the Chinese return to their hometowns for Qingming during this period.

Why is there a specific period for Qingming?

“The Spring Equinox energy of fire is ‘most balanced’ as the energy of the sun (in the day) is balanced with that of the night. “We want to tap into the energy of earth, heaven and man that are in alignment. Whatever endeavours we make will be easier and unobstructed,” said Lee. If there was a death in the family that is less than a year (new tomb), the family should go for Qingming prayers before the Spring Equinox.

What is the best time to visit graves?

Most usually visit the tombs as early as possible in the morning and finish their rituals to avoid the scorching sun. According to Chinese astrology, the sun rises during the hour of the Rabbit (5am to 7am). However, 5am is still dark here. So, many people begin their prayers from 7am onward, Lee said. In the old days, the prayer ritual should end before 3pm. This could be because graves were located on higher grounds and people needed time to hike down before dark. Nowadays, people visit their late relatives’ graves till 5pm.

Who should pray first?

Hierarchy is important in Chinese culture. Most people pray to their ancestors according to seniority. But these days, many Chinese think that if they are sincere in paying their respects, it doesn’t matter who they worship first. They schedule their visits according to family members’ convenience.

Sometimes there are family members who cannot observe Qingming during the allotted period because they are abroad, for instance. They can still offer prayers in front of the ancestral tablets, or visit their departed loved ones’ graves at a later date.

Who should not perform Qingming at the graveyards?

Can menstruating women pray at the grave?

Menstruating women should not touch the Earth deity at the grave site out of respect for him. There is no taboo restricting the holding of joss sticks and paying respects to the ancestors.

Should you wear bright or dark clothing?

Some elders forbid wearing brightly coloured clothing (red or yellow) to the graves. Others believe that people should not wear dark coloured clothes as it would attract wandering spirits. But Lee said that the colour of clothes is not important, what’s more significant is one’s sincerity of paying respect to the departed ancestors.

Can we perform Qingming rituals for non-relatives?

One is deemed to perform a meritorious act if he or she perform the Qingming rituals for those whom they have no blood ties with. Such a ritual will not have any effects on the lineage of the person but he or she is believed to be able to accumulate merits.

What are the purification rituals after Qingming?

After Qingming, some Chinese believe that they should step over a small fire to purify themselves before entering the house. After that, they should take a flower bath to thoroughly clean themselves. Lee explains these are precautions for peace of mind.

Qingming: Dos and don’ts of 'tomb sweeping' day for the Chinese 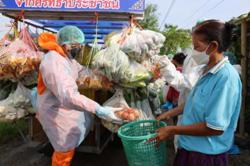 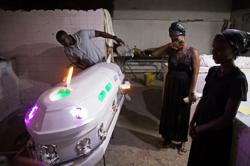