In a scene from Riverdale, Archie (K.J. Apa) takes Betty (Lili Reinhart) to the school dance. He looks dapper in a tux and she’s wearing pink, her favourite colour. Photos: Handouts

My latest guilty pleasure on television is Riverdale.

The dark reimagining of Archie Comics is a cross between Gossip Girl and Twin Peaks. (For the uninitiated, the classic comics tell of the adventures of Archie and his teenage friends, more specifically the eternal love triangle involving Betty, Veronica and our red-headed, freckled protagonist.)

Being a fan of Archie Comics growing up (I was always #TeamBetty), I was intrigued by the prospect of the comics being turned into a soapy teen drama.

Four episodes in, I am not disappointed.

Set in the fictional town of Riverdale, the series – replete with plot twists and turns – is entertaining nostalgia. It is bolstered by the charismatic presence of the young cast.

Veronica, who comes from a wealthy background, is the most sophisticated dresser of the Riverdale bunch.

There are certain elements of the comics a fan would immediately recognise: the signature red hair of Archibald “Archie” Andrews (played by K.J. Apa). The perpetual ponytail of girl-next-door Elizabeth “Betty” Cooper (Lili Reinhart), who wears a lot of pink. The kitty ear headband of musician Josie (Ashleigh Murray) of Josie and the Pussycats.

The throwback costume elements take inspiration from the archive of Archie Comics, which debuted way back in 1942.

As such, the wardrobe aesthetic fuses historical elements with the contemporary.

“(The costumes) mix and match period with modern,” said the show’s costume designer Rebekka Sorensen-Kjelstrup, in an interview with website Fashionista. “It has a bit of a retro feel at times and on some characters more than others.”

Naturally, Veronica – who comes from a wealthy background – is the most sophisticated dresser of the Riverdale bunch.

Played by the excellent Camila Mendes, Veronica makes her grand entrance in a flowing cape. She’s also never seen without a designer handbag.

From her red gloves and shoes to the spider brooch she likes to wear, Cheryl Blossom has a lot of standout pieces in the show.

“Veronica is more upscale – she comes from money, a New Yorker,” explained Sorensen-Kjelstrup. “You’ll see her wearing a bit more high-end, more fashionable pieces as compared to Betty. She’s more in dresses and short skirts and she has a jewel-toned, darker colour palette, whereas Betty is the more pastel-y palette of colours.”

To me, the actress who most resembles her comic character is Madelaine Petsch, who plays Cheryl Blossom. (The death of her twin brother Jason is the series’ central mystery.)

Riverdale’s head mean girl has flaming red hair and is so gorgeous, you can’t take your eyes off her.

From her red gloves and shoes (when Jason goes missing) to the spider brooch she likes to wear, Cheryl has a lot of standout pieces in the show, mixing 1920s vintage with contemporary motif.

Sarah Gabel looks nothing like the Miss Grundy we know.

On the other end of the comparison chart, Sarah Gabel looks nothing like the Miss Grundy we know. While the comic character is matronly and has white hair, Gabel’s version is youthful and has a scandalous affair with one of her students.

Where the male characters are concerned, special attention was paid to the headgear of Jughead Jones (Cole Sprouse).

In the comics, Jughead is the jokester who hankers after burgers. His signature look is a crown-shaped topper (known as a whoopee cap, popular with youngsters in the 1920s and 30s).

Archie and his (former) best friend Jughead. In the show, Jughead wears a knit beanie as his accessory.

In the TV show, Jughead is a moody writer who narrates the show and he’s no longer (yikes!) Archie’s best friend. As his accessory, Jughead now wears a knit beanie (with subtle enough points to reference a whoopee cap).

And what of the lead character, Archie himself?

Apart from his footballer jacket, the buff Apa is almost always shirtless; not that female fans would complain.

After all, this is the sexier, grown-up Riverdale.

Riverdale is now available on Netflix. Send feedback to star2@thestar.com.my. 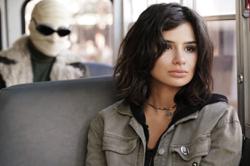 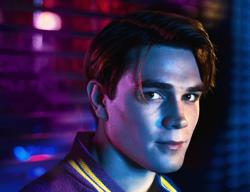