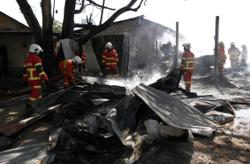 Change is necessary. But it is the government’s duty to ease that change for groups like fishermen in sea reclamation projects, says Assoc Prof Dr Chin Yee Whah.

The stone caught the interest of scientists some years back because of the old proverb that if it were rolling, it would not gather moss.

Curious to see if this was true, scientists fabricated a perpetually revolving drum. They threw in a few stones and even made sure there were lights (for photosynthesis), fertiliser, moisture and moss spores.

After six months of rolling the stones slowly over the equivalent distance of about 160km, it was settled: Rolling stones gather no moss.

This proverb is often used to describe people who are always changing jobs. Without that stick-to-it-ness, one with fickle ideas about occupation is said to be unreliable or unproductive.

But what if it were not the person who wanted to roll? How should people react if it was the very environment around them that was changing? Should they change with the times or are they also right to stay on and resist change?

“It is human nature to resist change and stick with the familiar. Change is something we fear even when we know it is necessary,” said economic sociologist Assoc Prof Dr Chin Yee Whah from Universiti Sains Malaysia, Penang.

Penang offers many opportunities to observe society’s reactions to the changing times, being a state that has seen more social, cultural, economic and political changes than most other parts of Malaysia.

Chew Seng San, 60, of Chew Jetty, was formerly a stevedore whose job became obsolete when the Penang Port created a deepwater wharf after the 80s and the North Butterworth Container Terminal was built about 15 years later. He now sells durian puffs. Photo: The Star/Asri Abdul Ghani

One character in the heart of George Town’s heritage enclave even offers a delicious aside.

“The homes at the jetty began as sheds that shielded the coolies from the sun while they waited for barges of cargo to arrive from ships too big to enter the port. With no money to find a place to live, the coolies spent their nights on the jetty. The sheds then expanded into communal homes and finally, individual houses,” said Penang historian Clement Liang, also a Penang Heritage Trust council member.

Chew was once a stevedore, which was a notch up from his coolie forefathers.

“When I was young, I would go out with my fibreglass boat and ferry ship cargo ashore or carry supplies to them,” he said.

After the 1980s, however, Penang Port created a deepwater wharf and about 15 years later, completed the North Butterworth Container Terminal. Chew’s job had been rendered obsolete.

Chew Jetty is now a tourist attraction, and little do the visitors know that the large fibreglass boat – still shipshape and sparkling clean – moored beside Chew’s durian puff shop is his.

“Nothing lasts forever. Everything changes. I’m still happy because I want to be,” Chew said with a smile.

More recently, inhabitants of another coastal area in Penang are facing the kind of changes that Chew and his clansmen survived.

Change is necessary. But it is the government’s duty to ease that change for groups like fishermen in sea reclamation projects, says Assoc Prof Dr Chin Yee Whah.

Using 3.6m to 4.2m skiffs and 40hp outboard motors, a few hundred inshore fishermen along the southern coast of Penang island scour the coves of gentle currents for prawns and fish. They are spread over several fishing villages ranging from Teluk Kumbar to Sungai Batu and Gertak Sanggul.

To fund the Penang Transport Master Plan (PTMP), there are plans to reclaim two islands – 930ha and 566ha – off the south of the island, affecting part of the fishing grounds of those inshore fishermen now.

The state government came up with the PTMP, estimated to cost over RM27bil, to solve one of the state’s biggest problems – traffic congestion – with new highways, bus rapid transit, tram, light rail transits, monorails, catamarans and even interestingly unique models such as water taxis.

“We object to the reclamation plan. How can we not? It will be right on top of our fishing grounds,” said Sungai Batu fisherman Soza Syahrimy Zainol, 41.

His objection, though, came right behind his acknowledgement that the reclamation was necessary.

“We know it is up to the state government and it is needed to fund the PTMP. But what about us who need the section of the sea they want to reclaim?”

He said “government people” had approached them a few times. He had heard about new job opportunities guaranteed to the area’s fishermen.

“I tell you this. I want to stay at sea. I don’t want to deal with bosses and customers and companies. I’d rather face the uncertain sea anytime,” he said.

“I have seen fishermen return with a sack of large prawns that the middleman buys for RM3,000. Even though such a great catch is rare, seafood is a stable commodity and cash changes hands instantly for it. Before you offer alternative economic models to such fishermen, you must empathise with their way of life,” said the sociologist.

In 1996, Chin was part of a team commissioned to study the social impact of Singapore-Johor Baru’s Second Link on the area’s fishermen and said their fears were all the same.

“Change is necessary. But it is the government’s duty to ease that change for groups like fishermen in sea reclamation projects.”

Chin said the state government must take pains to identify the fishermen that are wholly dependent on the sea.

“I have been to Teluk Kumbar several times. Many of these fishermen have second jobs and they only go out when the tides are best. Older fishermen rent out their boats more often than going out themselves.

“But there will be a group who depends entirely on the sea and the government must make sure there is enough aid to help them move with the changes,” he said.

When asked what the government had in mind for the fishermen, state Welfare, Caring Society and Environment Committee chairman Phee Boon Poh was all geared up to speak.

“The geopolitics of the island has been lopsided since Captain Francis Light founded it in 1786. All economic growth was centred in George Town from the sea to the hill, tourism was kept to the north in Batu Ferringhi and so on, industrial growth was in the southeast and everywhere else on the island was ignored.”

The absence of balanced statewide planning, Phee said, had left rural areas like Teluk Kumbar behind.

But he stressed that the urbanisation potential with the reclamation of the two islands did not mean wiping out what Teluk Kumbar is popular for today.

“If George Town’s heritage value is a state asset, then so is the kampung setting of the south. We not only plan to preserve the setting, we want to restore it and capitalise on its value as rustic holiday attractions,” said Phee.

He said just as there are five-star hotels in George Town on the same streets as rows of prewar houses made into boutique hotels, Teluk Kumbar could look forward to such synergy.

The planned reclamations will take about seven years to complete and embedded into it are about 1,100 jobs. The work ranges from marine jobs to construction duties such as divers, sea safety marshals, boat skippers, junior surveyors, welders and fitters.

Priority for the job vacancies will be given to the local fishermen and their families, and Phee said that was just the beginning.

“We are talking with the fishermen constantly to understand their needs. There will be great opportunities to their hometown. When their children grow up, they won’t need to leave to find better prospects elsewhere. This will curb urban-rural migration in the island’s southern areas,” Phee added.

“The fishermen may start working as early as next year,” said Azmi Mohamad, deputy project director of SRS Consortium, the appointed project delivery partner of the PTMP. “Not only on the reclamation project, fishermen will be able to work on the Bayan Lepas LRT and the Pan Island Link 1 Highway under the PTMP. This provides a steady income and secure future for the fishermen in the years to come.”

When told of this vision, Soza Syahrimy admits to being torn between the love for his carefree lifestyle at sea and the chance to see unprecedented growth take place at his home.

“I think they are going to reclaim this sea no matter how we object. I heard the PTMP will include a chance for us to become water taxi skippers. That sounds exciting. But I still can’t see how the future will be for us. I am willing to look for new opportunities, but if possible, I want to keep my life at sea,” he said.

Dogs also have the right to a survival kit in case of natural disasters
How Los Angeles plans to achieve 100% renewable energy
More than 5,000 tonnes of extraterrestrial dust falls to Earth every year
Listen to the music of a spider's web
Biodiversity 'hot spots' devastated in warming world
Are guinea pigs the perfect pandemic pet? Not quite, experts say
Eating less meat can have significant impact on carbon emissions, says WWF study
When it comes to cleaning your car, what's on the inside counts
French winemakers count cost of 'worst freezing in decades'
Passion for pigeons persists in Arab world