Every year, across the globe, funds running into billions are spent to mitigate non-revenue water. Yet there is no end in sight to the plentiful amount of water wasted or lost from water distribution systems before it can be used or billed.

So what are we doing wrong when it comes to stemming the loss of treated water? At the recent Water Malaysia 2015 Conference and Exhibition by the Malaysia Water Association, local and international speakers from various companies weighed in their opinions on why the problem of NRW persists in Malaysia, and offered technological solutions.

“Water is the most capital-intensive utility sector on Earth, more so than electricity or gas pipelines. Water assets are expensive, with more than 75% of them buried underground. As water, with its low tariffs, is perceived to be cheap, this has not helped utilities to think out-of-the-box in addressing the root cause of non-revenue water.” 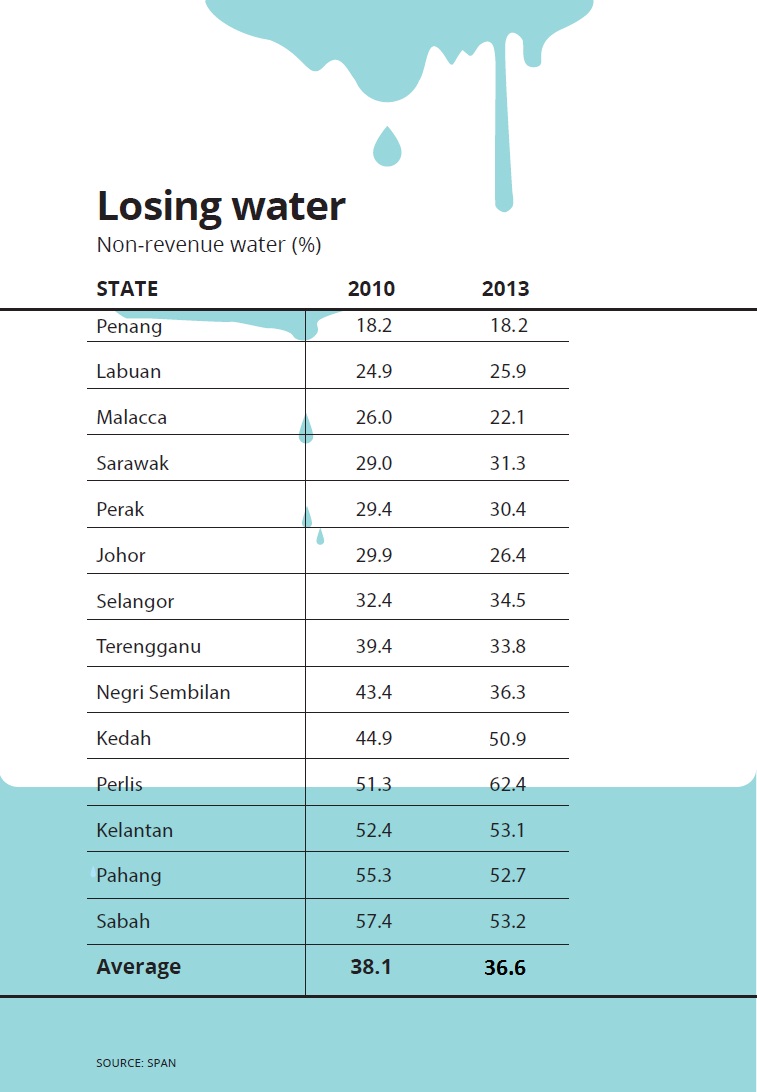 From his years of experience in dealing with the issue in Malaysia, he found a lack of interest among utility companies and authorities in NRW reduction programmes, where the return-on-investment is only visible after 10 years. While leakages, backlog in repairs, and even inaccurate billing contribute to NRW, Kinsbergen opines that tackling the problem is more than just looking at leak detection, pressure reduction or new piping. He also does not think that age is a determining factor of a pipe’s functionality, pointing out that there are 200-year-old pipes still in good working condition.

“The biggest problem, generally, is that Malaysian utilities do not fully understand their assets and use, like the distribution network or where the pipes are laid. It’s important that you know your infrastructure first before bringing in technology. For NRW mitigation programmes to work, there has to be a combined approach that includes leak detection, pipeline assessment, pressure management and hydraulic modelling.”

In hydraulic modelling, a software is used to determine the capacity of a water system and improvements that can be made. Kinsbergen says by understanding their own systems, utilities can make better decisions, such as knowing where to focus urgent actions.

“Studies have revealed that even with a fully integrated approach, it will take utilities in developed countries more than 30 years to minimise operational risks and leakage,” says Kinsbergen, adding that reactive approach is a very costly affair. 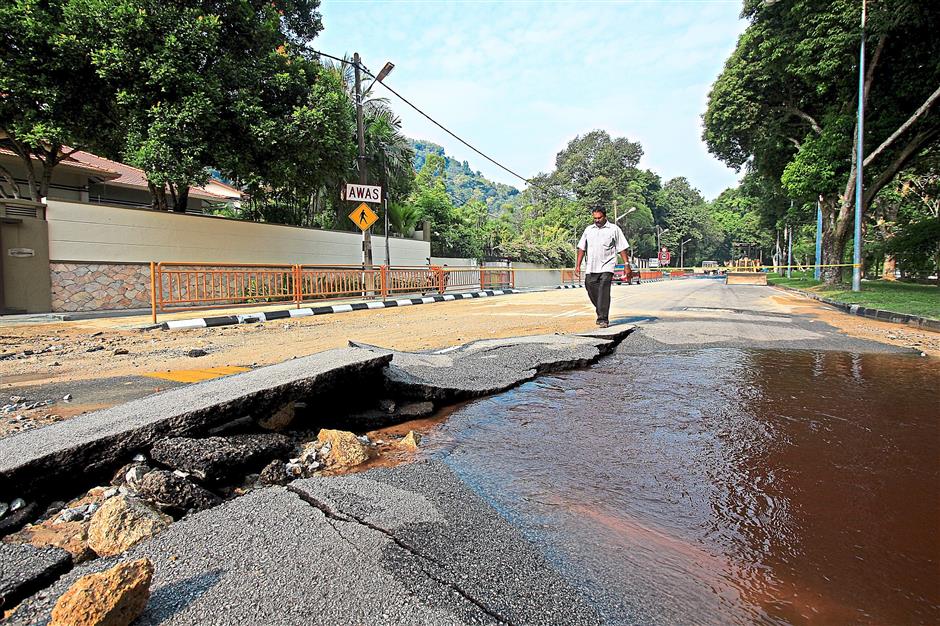 Early detection of leaks can prevent damage such as this which occurred in Tanjong Bungah, Penang, last year. - Filepic

He says utility companies tend to under-value pipes and components. When that happens, maintenance no longer becomes a priority. This eventually leads to failure of the infrastructure and in the end, leakage that is difficult to manage.

“Due to the low cost of water, companies find leak-tracing technology to be expensive. Leaks, meanwhile, can occur anytime in between scheduled surveys. For an open network without a district metered area, it can take a year or more to locate leaks.”

Nicol, who has been in Malaysia for eight years, says advances such as fixed leak detection, enables leaks to be located and monitored round the clock, in non-intrusive ways, enabling repairs to be done within a day. It can prevent catastrophic failure of pipelines and lower operational, maintenance and labour costs since there will be no necessity to randomly send out servicemen to find leaks.

Water piping consists of the transmission network and distribution network. The transmission network makes up 10% to 15% of all main service pipes, supplies large areas, and often operates under high pressure. Commonly-used methods to identify leakages are visual inspections, insertion surveys (inserting microphones into water pipes) and correlation surveys (which work by way of two sensors being attached to a pipe and measuring the time delay of the noise hitting each sensor).

Nicol says solutions to detect leaks in the transmission network are limited but recent technological developments work accurately, notably permanent correlation technology methods. “This technology locates leaks as they form and enables repair works to be done while the leak is still small. This way, pipes need not be closed, allowing uninterrupted supply. Leaks can be determined in a 24-hour detection cycle before a burst occurs. Depending on the pipe material and diameter, sensor nodes can be attached at intervals.”

The distribution network makes up the remaining 85% to 90% of all main pipes, and exists within confined service areas. It is characterised by multiple connections. Methods to identify leaks in this network include establishing district metered areas, sounding survey and noise logging, all of which are labour intensive.

Nicol suggests alternatives such as multi-parameter analysis and permanent correlation that can detect leaks even before public tip-offs. The devices are installed on fire hydrants or other existing fittings.

“Ultimately, the situation of non-revenue water differs and each case has to be specifically addressed with the right technology and approach. A combination of approaches may work too,” he concludes. 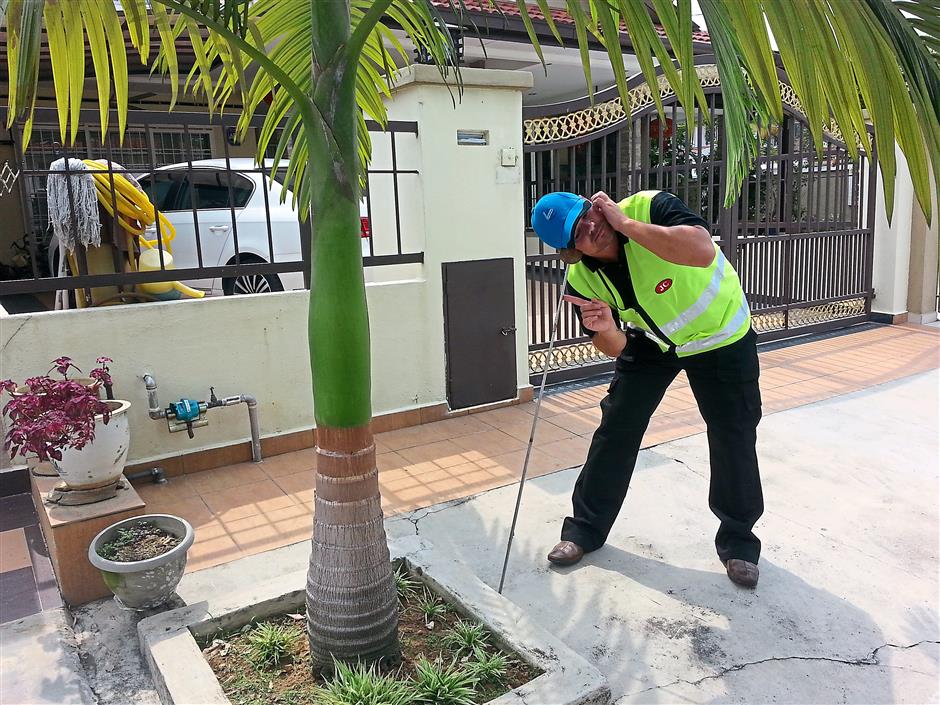 With new technological developments, the days of labour-intensive leak-detection methods such as the use of a listening stick, are over. Photo: JALUR CAHAYA

It is not always necessary to replace leaking pipelines as they can be rehabilitated with polyethylene pipes and liners, says Andrew Wedgner of Borouge Pte Ltd. This is done by simply pulling a smaller diameter polyethylene pipe through an existing pipeline to form a liner over the leak. This technique is regularly used to line water, sewage, gas, oil and even mining slurry pipelines.

There is also the pipe bursting technique for polyethylene pipe installations that are of the same size or a little larger than the original pipeline. The old pipeline will be broken apart by a bursting head and the pieces then pushed into the surrounding soil, allowing a new pipe to be pulled in place behind the bursting head. Wedgner cautions however, that such installation methods can stress the pipes, possibly damaging them.

Non-metallic pipes pose a different set of challenges when it comes to leak detection. Mohd Faisal Md Salleh, senior executive at Jalur Cahaya, a company which offers solutions to reduce NRW, says leaks from these pipes are not visible above-ground.

Any sounds of leaks are often masked by surrounding noise since non-metallic pipes are poor noise conductors. Mohd Faisal says there is also insufficient experienced manpower to do leak inspections. He says one solution is the noise correlator tool, which has acoustic sensors to pinpoint the location of leakages.

“In one instance, we had a choked valve that was buried deep beneath due to river deepening works, and it was uncovered with the help of the correlator. The combination of adequate sensors and good water pressure will enhance the capability of the noise correlator to catch noise induced by leaks,” says Mohd Faisal, whose company uses technology offered by Echologics.

“The higher the pressure, the more water is pushed through a leak. It’s important to understand that different pipe qualities will cause different failures. For instance, plastic and asbestos cement pipes are more prone to cracks and splits, resulting in higher leakage volumes at higher pressures. Over time, factors like corrosion, compression from traffic loading as well as other local and seasonal elements will reduce the strength of the pipes and cause burst frequency to increase,” says Wyeth, who specialises in advanced pressure management to reduce NRW.

He says there are basic pressure management methods that can be used, like installing pressure-reducing valves, setting up break pressure tanks to reduce excess pressure and rezoning water valves and mains.

“When burst repairs are reduced, water utility problems are eased. This frees up budget for repairs, reduces backlog or run time of bursts, and extends infrastructure lifespan.”

He says most water utilities in Malaysia are already using his company’s technology to manage NRW and the valves have worked well in locations where they have been installed. As for the still-high NRW rate, he says there are other factors to consider, such as commercial losses caused by faulty water meters.