Crop survival in a hot climate

Climate change will alter the production of major food crops, according to Dr Ajit Singh of the University of Nottingham Malaysia Campus.

In a world that is warming too fast, farming methods will have to change.

CHANGES in temperature, precipitation and wind patterns that are associated with climate change are expected to affect crop production – hence, food security is a looming issue.

Global warming is projected to alter the production of rice, wheat, corn, soybean, and potatoes – diet staples for billions of people around the world. Which is why agronomist Dr Ajit Singh contends that it warrants global concern.

“Food crops that we rely on most are sensitive to climate change as not only are the temperature and moisture of the surroundings affected, but those in the soil too. Simulation studies project a 20% and 30% decrease in global crop production, attributed to climate change, by 2020 and 2030,” says the associate professor at the School of Biosciences at University of Nottingham Malaysia Campus at a talk titled “Effects of Climate Change on Food Crop Production”.

“The growth stage is important as the crop will be exposed to drought or heat. Flowering or fruiting can be extremely sensitive, and the temperature and rainfall changes induced by climate change will interact with atmospheric gases, fertilisers and soil organic matter to produce unanticipated responses,” he says.

To illustrate how climate change correlates with crop output, Dr Ajit shares data from studies in three different regions: the African arid climate in Niger Republic, the semi-arid climate in Sokoto, Nigeria, and the tropics in Alor Star, Kedah. Based on data from the Meteorological Centre in Niamey, the Niger Republic – which has an annual rainfall of less than 500mm – recorded no significant increase in temperature between 2003 and 2012. Complete data on crop production could not be obtained but it showed mixed responses to temperature changes.

“The lack of data meant that we could not arrive at a conclusion but it gave us an idea on the kind of crops that are resilient or not affected by temperature increases. We found the hungry rice (Digeteria exilis) and groundnuts to be more resistant. This will prove useful when it comes to selection of crops in future.”

In the semi-arid climate of Nigeria where the annual rainfall is between 600mm and 800mm, 20 years of data from the Energy Research Centre in Usmanu Danfodiyo University in Sokoto showed an annual average increase of 0.04°C from 1991 to 2001. Rainfall remained unchanged during that period. Crops like onions, tomatoes and peppers were found to be suitable for the dry season when temperatures were lower while rain-fed groundnuts appeared to be more resilient.

He says there are various agricultural practices to offset the adverse effects of climate change on crop production and soil, such as mulching, that will help with water conservation and soil fertility, and crop rotation, which contributes to sustainable cultivation.

“Crop rotation or inter-cropping is an effective, natural pest control method since increased pest attacks are likely to arise from insects that reproduce from a lengthened breeding season and which multiply and thrive in hotter temperatures,” he explains. He adds, however, that mono-cropping (growing the same single crop every season) is commonly practised in Malaysia and other parts of developing Asia because of profitability in the short term. Cultivation of papaya, pineapple and oil palm are examples of mono-cropping systems.

Crop survival in a hot climate 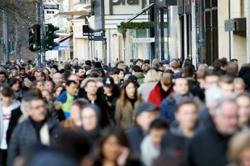