Earth Day, Earth Warriors: A marine biologist is making a sea of changes among Sabah's Mabul islanders to safeguard their fragile marine resources.

Its reputation as a world-class diving spot has gotten tourists flocking to Mabul Island in Sabah. The rich marine biodiversity is an underwater experience to savour, and this is made possible by the people who work tirelessly to spread marine awareness and monitor unlawful activities to help preserve this paradise.

Marine biologist Choo Poh Leem is one of these passionate “warriors”. She has devoted much time and energy to oversee the marine life while doing educational outreach. Mabul Island, she explains, is part of the Semporna Priority Conservation Area (PCA), a special marine area of about 7,680 sq km in south-eastern Sabah, believed to harbour the largest concentration of coral reefs in Malaysia.

“These reefs are globally significant in terms of biodiversity and are recognised as a ‘globally outstanding priority conservation area’ at the apex of the Coral Triangle. And the Coral Triangle is the nursery of the seas, with amazing biodiversity that rivals that of the Amazon and the Congo Basin,” says Choo, 27.

The Coral Triangle is an area of tropical marine waters bordered by Indonesia, Malaysia, Papua New Guinea, the Philippines, Timor Leste, and the Solomon Islands, and is deemed to be an area of high marine biodiversity. Since 2011, Choo has been working for WWF-Malaysia’s Semporna PCA Team, which addresses marine conservation issues plaguing the area.

Mabul is famed for “muck diving”, whereby critters such as the blue ring octopus, pipefish, seahorses, sea slugs and cuttlefish can be seen in sandy and sometimes, muddy, sea bottom. With the popularity of the island among recreational divers, Choo says the local community can switch from a fishery-based livelihood to a tourism-based one.

“There is potential to start community-based tourism that is sustainable and environmentally-friendly, and the locals themselves can become conservation champions,” she says.

Choo, who studied ecology and biodiversity at Universiti Malaya and has a Master’s degree in tropical marine biology from James Cook University in Australia, says her career choice stemmed from her love for the sea, and fascination with pretty underwater photos from books and television from a young age.

“I was born in Penang Island and raised at Batu Feringghi, and have always enjoyed all kinds of water sports and the wonderful underwater world. All these spurred my interest.”

One of her tasks is conducting training for the Green Semporna youth club and awareness activities with school children. She also carries out reef surveys twice a year. She says continuous reef monitoring is useful to show the condition of the coral reefs – whether they are improving or degrading.

“There’s a lot of planning and collaboration involved. To ensure that we monitor the large expanse of reefs in Semporna PCA, we collaborate with partners such as Scuba Junkie and Reef Check Malaysia,” she explains. 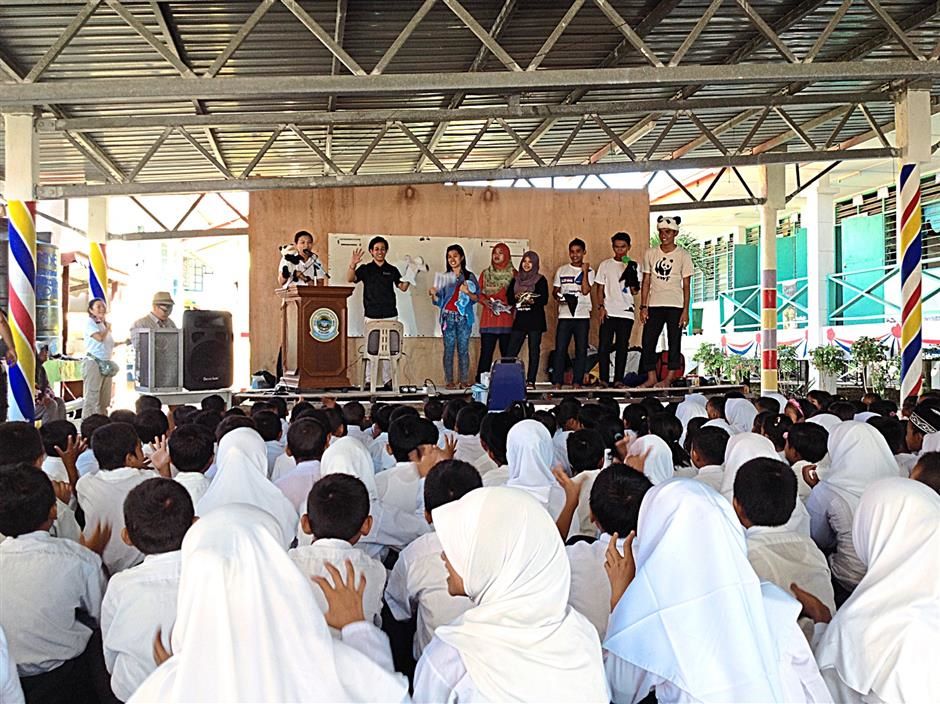 A problem that besets Semporna PCA is fish bombing or dynamite fishing – the use of explosives to harvest fish. Choo is working on an Anti-Fish Bombing campaign jointly with Sabah Parks, Sabah Fisheries Department, the Marine Police, Malaysian Maritime Enforcement Agency, dive operators and local communities. The campaign rallies for increased monitoring and patrolling.

She stresses that fish bombing has far-reaching destructive ecological impacts; a lot of untargeted fish get killed, and coral reefs which the fish depend on for survival are destroyed. Fish bombing is illegal under the Fisheries Act 1985 but the local communities perceive the act differently.

“The locals say that these fishermen share their fish with the others and feed the community, so there’s some sort of respect for these fish bombers,” shares Choo. Thus, she readily admits that effectively communicating conservation solutions remain a challenge, and it is compounded by additional barriers like language and cultural differences.

In the meantime, the composition of tourists has changed dramatically in the past few years, she says.

“It used to be seasonal with the influx of tourists hailing mainly from European countries. However, visitors from China are now constant throughout the year. Most Chinese tourists have never seen the sea before, so they have no idea how valuable marine resources are to the people of Semporna. So sometimes, harm to the marine life comes in the form of ignorance.”

She sadly notes that some species that had thrived previously can no longer be sighted in Semporna waters today, such as leatherback turtles and pygmy seahorses, which have not been spotted for the past two years. The endangered status of certain species found in Semporna PCA further highlights their vulnerability if nothing is done to protect them. They include four species of marine turtles, the humphead wrasse, six out of seven species of giant clams, the barramundi cod, and various shark and ray species.

So what inspires her to do this every day of her life?

“Positive feedback from supporters has always been my inspiration and motivation. There are a lot of people interested in conservation but they might not have the proper guidance to turn their passion into real action. Hence, as long as I can engage someone who is willing to change his or her perception and we can train more conservation champions, then conservation will win in future,” she says.

Arctic warming four times faster than rest of Earth: study
Heart and Soul: Do departed souls come back to visit their loved ones?
KL's Nowhere Kitchen turns edible leftovers into three-course meals
From rivers to hydrants, water theft is a growing concern amid Europe's drought
Princess Di's car up for auction
Hungry Ghost stories: I can see ghosts
Heineken makes sneakers with actual beer in them
Hungry Ghost stories: Spirit of the tree
Curious Cook: More on plastic recycling and biodegradable options
How boats are finding a new purpose on land