FENG shui, the ancient Chinese art of geomancy, teaches that the physical environmental orientation and arrangements of buildings and furniture will affect the well-being, health and fortune of people. It is popular among the Chinese and Asian communities where businessmen in particular would consult feng shui masters to ensure the auspiciousness of their business premises. Even many Westerners have come to believe in feng shui.

Is feng shui fact or myth? In one television show, one feng shui specialist kept on insisting that feng shui is a fact without providing any evidence. The other feng shui specialist, a woman, referred to telecommunications to show that there is electromagnetic energy in the air which can be received with the right equipment. Similarly, there is ill-understood feng shui energy out there which affect human beings. Still, she could not offer any proof. It has to be admitted that feng shui enthusiasts have little scientific evidence of feng shui.

But, there is remarkable evidence from geography, geology, environmental science, astronomy, astrophysics and medical psychology that feng shui is a science and that it has real physical and medical effects on human beings. Let us examine the evidence one by one.

Feng shui energy is called lung mei (“dragon's breath”) or lung qi (“dragon energy”). Mountain ridges and watercourses are regarded as the vibrant manifestations of the lung (“dragon”). The ancient Chinese believed that water flowed in subterranean courses called “veins of the dragon”. Out of sight, the hidden veins of water served, like the bloodstream of animals, to remove impurities from the “body” of the Earth, which was considered not a huge pile of rock but a “living being”, and to deposit curative minerals, often in hardly detectable trace quantities, in it. The Earth's circulatory system was matched by an ever-changing network of currents in the atmosphere.

Thus, in feng shui, the terrain is criss-crossed by lines of lung mei whose conditions would determine whether there is qi (good energy making the place auspicious or good for Man) or sha (bad energy making the place inauspicious or malevolent for Man). Is there evidence that the terrain is criss-crossed by subterranean energy lines of lung mei affecting Man? The surprising answer is “Yes”!

Weak electromagnetic fields in underground waters are detected in the West and Europe by the dowsing rod.

Dowsing is usually called “water divining”. Although underground water is the most common thing sought by dowsing, the method could be used to detect non-aqueous objects, especially minerals. During the Middle Ages, dowsing was used to search for underground mineral veins. Water dowsing could often detect water where geologists claimed there would be no water. Just like feng shui, water dowsing is not scientifically understood. Yet, the remarkable thing is that a dowser can not only find water and other substances beneath the earth, but specify in what quantity and at what depth.

What scientists know is that underground water dissolves rock and soil particles and becomes a solute, which has a weak electric charge and electromagnetic field. As the water flows around the rocks, the water particles execute complex oscillatory movements, producing parallel oscillating electromagnetic waves. Living organisms, including Man, are usually more sensitive to such environmental stimuli than some physical instruments. For instance, the sense of smell allows us to detect the presence of airborne molecules of a given substance. The man holding a dowsing rod is somehow sensitive to the electromagnetic oscillation of the underground water. The human organism simply becomes the signal amplifier as the impulse travels through the nervous system to the hand muscles and the operator unwittingly turns the rod, which thus is akin to the indicating needle of an instrument.

For a long time, Western geomancers have reported that these underground water lines could cause a wide range of serious illnesses including cancer.

W.H. Trinder, an American dowser, wrote: “Many go to prove a direct connection between cancer and tumours especially after a prolonged residence by the subjects in the same (underground water) spots. They give a list of accredited cases of cancer with sketches of the position of houses and in every case the rooms occupied by the sufferers are situated directly over subterranean streams. Their argument is that the rays thrown off by an underground stream have a very harmful effect on human beings who happen to spend a great part of their lives living directly over them.

“A tree standing directly over a subterranean stream is far more likely to be struck by lightning than one not so situated. An additional claim of theirs is that certain trees, noticeably apple, plum and pear trees, when planted directly over subterranean water, will never thrive .

“Seeing that the rays have been picked up by an aeroplane at a height of 2,000 ft (610m) they may quite possibly act, in the case of lightning, as a conductor, which would account for the vulnerability (to lightning) of trees situated over subterranean water.

“Rays given off by subterranean water are, if continuous contact is maintained with them, definitely harmful to both human beings and plants. There is less chance with animals as, their senses being more acutely tuned to the harmful things in nature, they will avoid these rays as a matter of course.

“One lady suffered from sleeplessness and on the ground floor of her house I traced the flow of an underground stream. This, it was proven, ran just under where her bed was situated in the room above. The bed was moved to another position and her sleeplessness disappeared.

“I have known instances of people suffering from nerves and also cases of rheumatism. In all these cases the sufferers were spending a large part of every 24 hours right over a subterranean stream and this was slowly having the most harmful effect on their health. However, the bad effects disappeared after they had taken steps to avoid sleeping over the stream.

“Several ailments have been linked to locations with underground water: arthritis, cancer and animal diseases. On the other hand, bee hives with stronger colonies than others are those over underground water. Ants appear to benefit from water veins and dowsers would find large hills of the insects built over water veins. Certain varieties of trees like oaks, elms, ashes and willows thrive over water veins. But trees like beeches and conifers became diseased. In one survey of orchard trees, those planted directly over irritation zones developed cancerous growths on trunks, and cherries had an abnormal increase in the flow of sap. Plums and pears rotted or withered to death.”

Geologists and engineers are aware that below the ground surface there are water channels flowing through soil and rocks, including interposed water aquifers. Yet, such underground channels of water were already known to exist by Chinese feng shui masters! Lower aquifers usually contain very clean water and they are often extracted and sold as bottled natural mineral water.

The more common upper aquifers, however, usually have very dirty water full of dissolved ions, especially iron particles, and their water require filtration before use. Rainwater falling on the ground could percolate through the ground into one of these aquifers or below. Hydrostatic and capillary pressures could drive water up through wells.

There is also evidence that this underground water also produces positive ions, which are medically known to have harmful effects on Man.

The terrain is therefore permeated by a huge network of water aquifers and water channels connected to them. The water in them has a weak electromagnetic charge and field and there would be lines of electromagnetic charges and fields along the courses of these water channels and aquifers! These are part of the network of feng shui energy pulsating throughout the terrain! What feng shui also knows for years is that living organisms, including Man, are affected by the emanations from these water channels and aquifers.

These underground watercourses intermingle and interact with other geographical and geological formations like mountains, hills, rivers and valleys. They form one major basis of feng shui, which teaches that landforms have feng shui effects on people.

So, the feng shui enthusiasts are right after all! There is something real about feng shui. 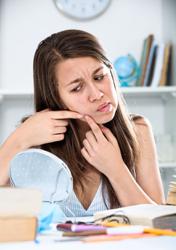