Should you continue wearing a face mask on flights? 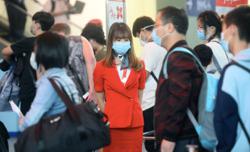 There are certain parts of a flight when you might be more vulnerable to catching a virus, as germ-containing aerosols could be higher in the cabin air during these times. — dpa

While some travellers are pleased, others are afraid of being infected with the SARS-CoV-2 virus that causes Covid-19 and want the extra protection that masks provide.

What should they do?

We spoke with an expert.

How can you best protect yourself during a flight?

The benefits of mask-wearing are undisputed, says German aerosol physicist Gerhard Scheuch, who has studied indoor aerosol-borne transmission of the SARS-CoV-2 virus for the Stuttgart-based Association of Pneumological Clinics (VPK).

His tip: "If you have concerns and want to protect yourself really well, you'd be well advised to wear a mask."

Flights can last a long time though, and wearing a mask for the duration is uncomfortable.

For those seeking the sweet spot between wearing one and going maskless, Scheuch notes that "wearing a mask is especially important when you're boarding, before take-off and after landing".

He has analysed cabin air during several flights, "and I noticed that carbon dioxide levels in the plane – and consequently aerosol levels – rise when it's on the ground.

"They drop during the flight and constantly remain relatively low."

The reason is that aeroplanes are better ventilated in the air than on the ground.

This, and a good filtering system, are among the reasons that compulsory mask-wearing during flights came into question.

Describing hygiene measures on board, the German airline Lufthansa, for instance, states the following on its website: "All the recirculating air is filtered and impurities such as dust, bacteria and viruses are cleaned out of the air in the cabin.

"This comprises about 40% of the cabin air – the rest is fresh air from outside the aircraft."

The carrier goes on to say that the airflow in an aircraft is from top to bottom: "There's no airflow horizontally from side to side or along the length of the aircraft."

So, having an empty seat between you and a fellow passenger – an option sometimes offered by airlines during the pandemic – isn't an effective Covid-19 precaution.

Are there any indicators of when it may be prudent to wear a mask during a flight?

Yes, says Scheuch, namely, the concentration of carbon dioxide in the ambient air.

He measures it in aeroplanes and other enclosed spaces with a carbon dioxide meter.

"People exhale carbon dioxide. So when carbon dioxide levels are high, aerosol levels could be high as well," according to Scheuch, who always has a carbon dioxide meter with him and advises others to do likewise if they're anxious and feel unsafe.

A carbon dioxide meter essentially shows when the air in a room is "stale".

Many of the devices remind you several times a day to open the windows of your home.

According to German consumer watchdog Stiftung Warentest, during the pandemic, you should ventilate rooms when carbon dioxide levels exceed 800 ppm (parts per million).

Is it better to wear an FFP or a surgical mask?

FFP2 masks are required by European standards to capture at least 94% of aerosols larger than 0.6 microns – a level of protection similar to that of N95 respirators in the United States and China's KN95 masks.

FFP3 masks must capture at least 99%.

So when properly worn, high-quality masks of this type protect you well.

"Surgical masks also protect you rather well, typically capturing between 70 and 90%," says Scheuch, who has been doing research on aerosols for about 40 years.

"Initially I wasn't a fan of masks, having read studies saying they weren't particularly useful in the pandemic," he remarks.

"But I changed my mind the first time I tested FFP2 masks myself in a laboratory."

However, the various types of face masks effectively protect you only when they fit snugly on your face; otherwise, you basically breathe right past them – almost as though you weren't wearing a mask at all.

You can tell the mask is snug if it moves in and out as you breathe.

Does it help to practice physical distancing from other passengers when queuing up at the airport, and when boarding and disembarking the plane?

"The discussion of distancing arose when it was still thought the virus was transmitted via droplets – by someone coughing or sneezing on you, in other words."

Now it's clear that aerosols are mainly responsible for Covid-19 infections, he explains.

"These are very, very small airborne particles – a cloud, as it were.

"And you can't really distance yourself from this cloud in these situations."

Although the transmission risk is somewhat higher when you're near an infected person and not a certain distance away, what matters most is how long you're in close proximity.

"The risk of transmission is high if you stand very close to the person and for a very long time," Scheuch says.

So there's little cause to worry if pushy people ignore your desire for distance at the security check, gate or in the aisle of the plane.

"The transmission risk is very, very slight if you're only briefly bumped or jostled, because the duration of contact is much too short," he says. – By Simone Andrea Mayer/dpa