Gift of a liver delivered me from death 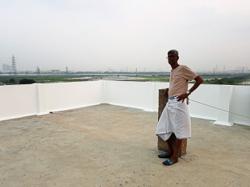 The writer (in bed) with his living donor Ravi after the liver transplant. Ravi recovered much faster from the operation than the writer. — DORAIRAJ NADASON/The Star

Well, they didn’t actually tell me ~ I was slipping in and out of consciousness.

The doctors told my family.

All I remember were fleeting sights of my sister-in-law crying in a corner, my wife being consoled by someone and a relative, greasy and dirty, standing mournfully over me in the intensive care unit (ICU).

I wondered: “Why is he coming to see me like this; couldn’t he at least bathe first?”

I was to learn later that he rushed over because he thought he would never see me alive again.

My liver, punished by the high-living of years past, had all but collapsed.

I had cirrhosis of the liver, scarred beyond repair. My kidneys had given way too.

Stuck in the ICU room, it felt like the tubes in my body were linked to two adjoining rooms, with both rooms calling to me.

A tussle between life and death?

I will never know.

My main doctor, consultant gastroenterologist and hepatologist Datuk Dr S. Mahendra Raj, said there was only one way that I would be able to be up and about again – I needed a liver transplant.

As the liver is one of the two body organs that can be donated by a living donor, the desperate search began.

Relative, friends, acquaintances – all were asked if they could help, but few were willing to part with their organs while still alive.

Meanwhile, I was slipping away.

The kindly consultant nephrologist, Dr Foo Siu Mei, who was managing my kidney failure, was not one to give up.

During one moment when I was coherent, she asked: “Do you want to live?”

I nodded. And she banned visitors.

I was in isolation – and this was long before Covid-19 raised its ugly head.

Everything was a haze. Day and night blended; a young nurse slapped me awake as I swallowed my tongue while she tried to brush my teeth.

A couple of my bosses came to visit. I was out cold. They left a note, wishing me well.

Then two ex-colleagues came. This time, I was awake.

One of them said: “There are so many ways to die, but you had to choose this one.”

It was like a dagger driven deep. I felt the tears down the side of my face and vowed to somehow climb out of this deep hole I was in.

A metal catheter was inserted in my neck for haemodialysis to do the work of my failed kidneys.

The procedure took hours, with a cloth covering my face, leaving an opening only at the neck.

I saw nothing, but I could hear Dr Foo working ever so slowly, trying to make it the least painful possible.

She was incredibly patient.

After five days of isolation, I finally woke one morning with a clear head.

I reached for the mobile phone and sent a message to my daughter.

It was a message I was to send every day for the next week.

Each day of lucidity raised my hopes. Then I could finally get out of bed and walk.

A few days later, I was told I could go home – but it came with a caveat. It was only a matter of time before the inevitable would happen.

That liver transplant was more important than ever.

Then a relative by marriage, Ravi Kandasamy, stepped in.

He is the brother of that sister-in-law who was crying in the corner when my family was told I was going to die.

He was willing to be an organ donor – what they call a living non-related donor.

It would take him away from work for months as he would be in hospital and would need to recover, but he didn’t flinch.

Thus, the preparations began – a barrage of tests for both of us.

After days, he was cleared. He was fit, compatible and the blood type worked.

Some 70% of his completely healthy liver would be removed and transplanted in me.

He would have to live with 30% for a few months, but his liver would grow back to full size eventually.

Me? I would have to make do with the 70% – minus whatever is lost during the operation – for the rest of my life.

It was not 100%, but it was good enough to keep me healthy and alive, provided it was not abused like the old one.

There was another catch.

Dr Mahendra Raj recommended that the transplant be done in India at an affiliated hospital.

They have some of the best doctors and it is a common procedure there. But that meant paperwork – lots of it.

There were sworn documents to be prepared, several trips to Putrajaya – thank God being a journalist meant you had colleagues who knew people there – and calls to the hospital in Chennai to set up lodging nearby, arrange the doctor appointments and determine the costs.

The folks in Putrajaya were sympathetic and helpful.

One lady even thanked Ravi for volunteering. “You are doing a great deed. God bless you,” she said.

It was a difficult one. I was almost too frail to travel, but there was no choice.

Fortified with a last-minute blood transfusion, I headed for KLIA.

I was taken in a wheelchair to the plane, and off it later in India.

At the airport, my 18-year-old daughter, preparing for her SPM exams, and family members came to see us off.

There was no guarantee they would see me return.

In India, the doctors ran another battery of tests. They had to be sure.

The man is reputedly one of the best liver transplant surgeons in the world.

Aside from practising in Chennai, he is also a professor of liver surgery and transplantation at King’s College Hospital in London, United Kingdom.

The prep, as he called it, took months.

And it was all due to his plan to open up his own hospital.

At that time, he was working at the private hospital I was recommended by Dr Mahendra Raj.

But the hospital administration caught wind of his plans and told him he could leave right away.

Meanwhile, my family and I had attended interviews with the Chennai state health authorities.

The state has to give the go-ahead before any transplant operation, and we were brought before a panel.

They had some hard questions.

Why do you need the transplant? Why not back at home?

Who is the donor? How is he related?

Is he married? Do his wife and children know? Have they agreed?

We answered them all, then they wanted to know why my immediate family members were not the donors. Why a relative by marriage?

I was 58, and the youngest in the family. All my siblings were too old to be donors.

It took two days of such questioning before they finally gave the okay – just as the good doctor was ousted from the hospital.

That brought the hardest question of all: the hospital or the doctor? I had to choose.

I could stay in the hospital and another doctor would take over and the cost would be unchanged.

Or I could move with the doctor and the agreed package deal with the hospital would be off. I would have to pay a larger sum.

I chose the doctor.

Hospitals after all, are just brick-and-mortar and equipment. It’s the hand that wields the equipment that matters.

So, it was off to a borrowed hospital premises , which was a good distance from where we were staying.

But that also meant the earlier go-ahead I had gotten from the state authorities was off.

A different hospital meant I had to go through the procedure all over again.

There was a different panel this time.

Finally, the go ahead was given again, but not without much to-ing and fro-ing.

The expected date of surgery had been around end August.

It was now September and I was wasting away.

The body needs protein. When the liver cannot process it, the body starts to eat its own muscles.

That was happening to me.

I had been an athlete, a football player, and proud of my calf muscle.

It was now the size of a chewed mango pit. I needed the surgery.

Finally, after many requests – you could say we practically begged – the date was finally set.

Hours before we were to go under the knife, I walked over to the room where my donor Ravi was.

We each had a room and a caregiver. My wife was with me, and for him, it was his sister, Kala Devi Kandasamy – my sister-in-law.

I held his hand and wanted to say thank you. The tears welled, but the words refused to come out.

I was choking with emotion. He understood and nodded.

Organ donation – that has to be the noblest deed of all.

Giving of oneself so that another may live. It’s almost unthinkable, but it’s amazing.

Cadaveric organ donation is something to be cherished. A living donor – that’s even greater.

I sent a message to my then boss Leanne Goh who had stood by me through it all from the beginning.

“It’s not the operation I fear,” I told her. “it’s not waking up afterwards.”

I had written my will, pretty much said my goodbyes, and I was ready for the end.

Of course, the thought of my daughter growing up without me tore at the heart.

That was probably the hardest part.

I was lying on the stretcher, shaven and wearing that mini dress that they call a gown, struggling to cover my modesty.

I stand at 188cm – or did before the illness – and the gown didn’t cover much of me.

Ravi had already been wheeled into the operation theatre about an hour earlier.

My wife was near my feet – she must have been frightened to death – and my sister-in-law was holding my hands.

A doctor had told us that they would remove 70% of his liver and do some on-the-spot testing before the surgery could go ahead.

Even at that point, there was a chance that it would be deemed incompatible and the whole thing would be called off.

The medicine was making me sleepy. I closed my eyes.

“Why is it taking so long?” I asked again.

Both of them smiled.

My worst fears had not come true. I had awoken. I was alive.

But there was more – much more – to come.

Pain, panic, a hellish ride and little devils running loose by my bed.

Dorairaj Nadason is consulting editor at The Star.

'We are family': Paying tribute to the siblings of children with cancer

Kidney transplants in Malaysia are back on again