'We are family': Paying tribute to the siblings of children with cancer

Each year, over 200,000 children and adolescents are diagnosed with cancer worldwide.

In Malaysia, it is estimated that 1,200 new cases are seen annually.

Despite being a middle-income country, Malaysia is blessed with a modern healthcare service.

Children who are diagnosed with cancer in this country are able to receive prompt diagnosis and good quality care.

Cancer treatment is not only long (on the scale of months to years), but extremely arduous.

Therefore, when a child is diagnosed with cancer, the response is palpable.

Organisations pitch in to help with medical costs.

Doctors remain at the ready.

The phrase itself, “kids with cancer”, invokes heart-rending images and the desire to be charitable.

Yet, despite the collective effort to support paediatric cancer patients, there is another group of innocent victims who often remain overlooked: their siblings.

The uncertainties and upheavals that follow when a child is found to have cancer can undermine even the most stable of families.

During the treatment period, siblings of children with cancer experience a significantly decreased cognitive quality of life and are susceptible to long-term absences from commitments like school and extra-curricular activities.

As parents must devote their time, money and attention to the sick child, siblings suffer from neglect and feelings of abandonment.

They are therefore at an increased risk of long-term psychological issues, behavioural problems and overall emotional instability.

Several Western studies have recognised the psychological effects of a cancer diagnosis to children in a family unit.

In a 2014 Swedish study of 29 children who had a brother or a sister with cancer published in the Cancer Nursing journal, it was found that siblings experienced both grief at their sibling’s diagnosis and sadness about feeling unimportant or forgotten.

In a 2013 study published in the journal Families, Systems & Health, involving 125 American children between the ages of eight and 17 who had a sibling with cancer, nearly a quarter of those surveyed met the full criteria for post-traumatic stress disorder (PTSD).

Notably, the demands are not merely psychological.

Some types of paediatric cancers, such as acute myeloid leukaemia or high-risk lymphoblastic leukaemia, require bone marrow transplantation to cure.

Siblings are typically the most suitably-matched donors.

The ethical issue of whether a minor is able to make an informed consent to such an emotionally-traumatic elective procedure – particularly given the context of familial pressure – is routinely overlooked in the face of medical necessity.

Added to this inequity is the fact that the adverse risks to a child being a marrow donor are negligible when compared to the outcome faced by his or her afflicted sibling who does not receive a transplant.

What is the experience of siblings of children with cancer here in Malaysia? 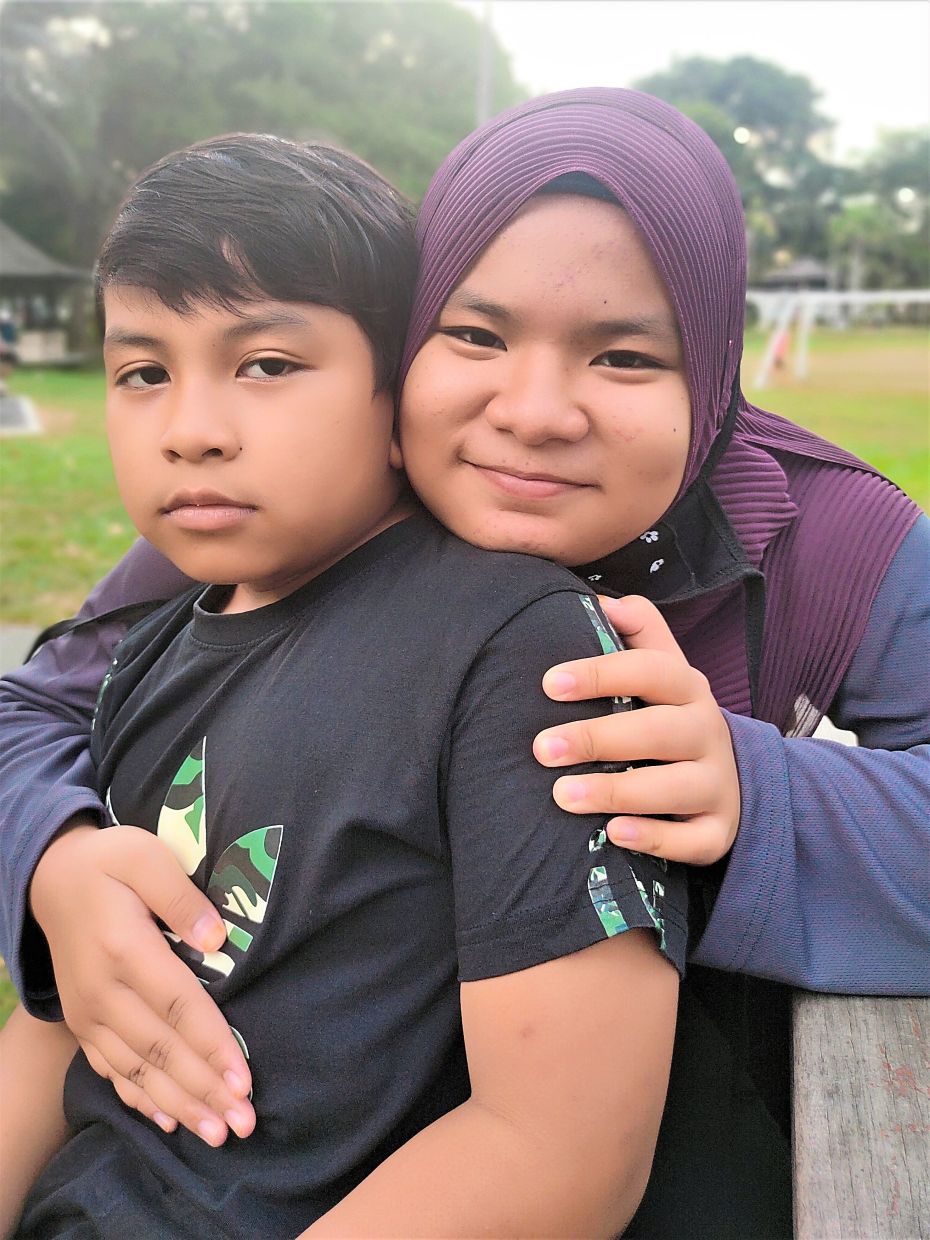 Nur Najlaa (right) happily donated her bone marrow to her younger brother Muhammad Aqil when he needed it. Today, both siblings are healthy and happy.

While no formal studies or dedicated interviews have been carried out, the general feeling is that coping skills are reasonably robust.

Overtly, most of the young donors seen at Universiti Malaya Medical Centre’s (UMMC) Bone Marrow Transplantation ward greet their responsibility with a maturity beyond their years.

Most do not protest, and instead, put on a brave front as they are wheeled to the operation theatre for their marrow stem cells to be harvested.

Some are even enthusiastic about the chance to save their closest companion.

Perhaps it is due to having to grow up quickly; maybe it is the local culture of stoicism or the embodiment of fraternal love.

The general sense is that these sibling marrow donors have accepted this unique challenge as merely part of their familial responsibility.

He had been diagnosed with acute leukaemia and subsequently underwent chemotherapy at UMMC.

Their mother accompanied him to the hospital, where he was frequently admitted.

During those times, she remembers being cared for by her father and her aunt, as well as periods staying at her grandmother’s home.

Several months later, she was told that her brother needed her bone marrow if he was to survive.

Nur Najlaa, who was nine years old at that time, has little recollection of the day of the procedure.

One can easily imagine the scene: her thin wrists, tangled by a string of intravenous (IV) tubes, and wide eyes flickering back and forth between the doctors, nurses and a myriad of staff working busily around her with blinding lights above.

Despite being the centre of attention, one cannot help but feel that these young donors are going into this procedure completely alone.

A procedure which, for Nur Najlaa, was medically unnecessary.

Instead, all she remembers is the ride on the hospital trolley and the bright lights of the operation theatre.

“I was just a little bit scared,” she says, but was quick to add that: “I wanted to help my brother because I love him a lot.”

Nearly four years have passed and both siblings are in good health.

The days of Muhammad Aqil being ill in the hospital and the family members being apart seem a distant, faded memory.

It’s easy to look at the suffering of siblings of childhood cancer patients and conclude that parents should just pay equal attention to their healthy children. 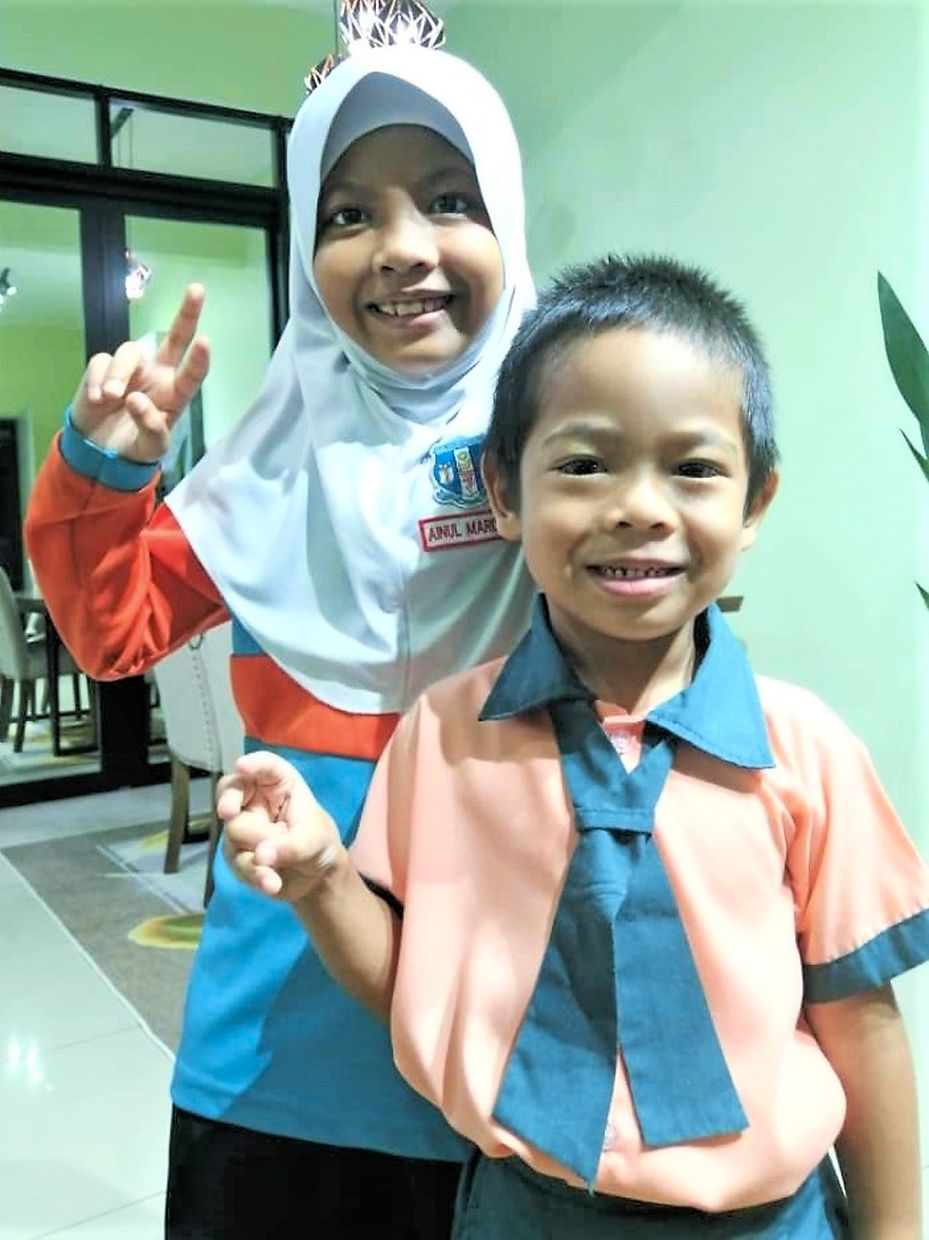 Nur Ainul (left) and Danish Aidan are a rare case of more than one child in the same family developing acute lymphoblastic leukaemia.

The truth is that supporting a sick child, while simultaneously providing full attention to their sibling(s) is near impossible.

For parents like Mohd Alihan Masbi and Nabilah Kamarrudin, whose two children were both diagnosed with acute lymphoblastic leukaemia at separate intervals, maintaining a sense of normalcy within the family unit required a Herculean effort.

“I could no longer breastfeed due to stress,” Nabila recalls.

At the time, she was working as a bank officer.

“Luckily, my co-workers were supportive and let me work remotely from the hospital ...

“Then my parents and mother-in-law travelled all the way from Johor to help,” she shares.

Thanks to the help of relatives, the family made it through this difficult period.

But their relief was short-lived: just as Nur Ainul completed the intensive phase of her chemotherapy protocol, Nabilah noticed that her toddler was progressively pale and bruised easily.

Her worst fears were confirmed when Danish Aidan too was diagnosed with leukaemia.

This time, the support structure was already in place: now, Nur Ainul was cared for by relatives, while Danish Aidan underwent treatment in the hospital.

While situations where multiple children in one family concurrently develop cancer are rare, stories of family members pitching in to help are common.

Non-immediate family members, especially grandparents, are often involved in the care of children with cancer and their siblings.

Malaysian families appear to be far more extensive and closer than their more nuclear Western counterparts, and therefore, more resilient in times of hardship.

Extra support presumably allows parents more time and resources for themselves and their other children.

Clearly, having this type of built-in support network would be a life-saving grace in periods of hardship.

Today, four-year-old Danish Aidan is at the tail-end of his chemotherapy protocol and shares a tight bond with his sister.

“They always sleep next to each other,” Nabila says, smiling.

“And when Danish Aidan goes to the hospital, his sister gets anxious, because she knows what it’s like.”

While it appears that the siblings reported here are cheerfully stoic, it would be naive to think that these observations accurately reflect the true situation in the majority.

One wonders whether traditional local values that stress subservience of individuals for the “greater good”, as well as deference to elders, albeit admirable, may make it difficult for siblings of cancer patients to share their emotional struggles openly.

Two Canadian psychologists, Susan Tasker and Genevieve Stonebridge identified eight needs of adolescent siblings of children with cancer. These were:

The next obvious question is how can we meet those needs.

Studies have shown that added social support – from teachers and friends at school, for example, or a trained therapist – can have a significant positive impact on the overall wellbeing of siblings of childhood cancer patients.

The most important step is recognising that these siblings, who often are children themselves, may need additional support in the first place.

The second is providing support when needed, as a friend, a healthcare professional or a potential mentor.

It is evident that regardless of our personal and professional capacities, all members of society have a role to play in supporting these children who can be indirectly affected by a life-altering cancer diagnosis.

As the African proverb goes: “It takes a village to raise a child.”

Thus, it is the community’s collective responsibility to ensure that siblings of children with cancer do not feel abandoned, and to recognise and appreciate their resilience, as well as their sacrifices.

Kailey Dubinsky is a visiting Fulbright Scholar undergoing a training attachment at UMMC’s Paediatric Haematology-Oncology and Transplant Unit. Professor Dr Hany Ariffin is the unit’s head and a senior consultant paediatric oncologist. For more information, email starhealth@thestar.com.my. The information provided is for educational purposes only and should not be considered as medical advice. The Star does not give any warranty on accuracy, completeness, functionality, usefulness or other assurances as to the content appearing in this column. The Star disclaims all responsibility for any losses, damage to property or personal injury suffered directly or indirectly from reliance on such information.

Children with Down syndrome have higher risk of leukaemia

How Covid-19 has affected child cancer care in Malaysia