For those scared of needles, researchers are working on Covid-19 vaccines that can be sprayed into your nose or popped into your mouth. — AFP

What if the next Covid-19 vaccines didn't need to be administered with needles and syringes?

Researchers around the world are working intensively on developing vaccines that can be administered nasally or orally.

But what are the advantages of this kind of solution?

"The upper respiratory tract is an initial site of SARS-CoV-2 infection, and for many individuals, remains the primary site of virus replication," explain researchers and immunologists in the Science Advances journal.

In the journal Science, researchers from the University of Alabama at Birmingham in the United States are also advocating the benefits of nasal spray.

According to them, it could even be more effective, since "immunoglobulin A (IgA) and resident memory B and T cells in the nasal passages and upper airways are elicited by intranasal vaccination and prevent infection and reduce virus shedding.

"Serum IgG elicited by intramuscular vaccination transudates into the lungs and prevents pulmonary infection, but allows infection in the nasal passages and virus shedding."

While no such Covid-19 vaccine is marketed to date, tests and experiments are gathering pace.

Research into one vaccine, published in the journal Science Advances by American scientists, shows it has been successfully tested on ferrets and mice.

This vaccine is expected to be tested on 80 healthy adults in the coming months.

In France, researchers at the University of Tours are also working on a nasally-administered vaccine.

The 20 or so researchers who have been working on the project since last summer hope to start testing the vaccine on humans at the end of this year, or early next year.

A total of six nasal spray vaccine projects are being studied worldwide.

This method of administration is still relatively unusual for vaccines, even though it has been used in certain countries, like the US for flu vaccines.

Other solutions are also being explored to facilitate the use of Covid-19 vaccines around the world.

In a global first, a clinical trial for an orally-administered vaccine has just been launched in Israel, according to the Jerusalem Post.

This trial has just entered Phase 1, and is designed to measure safety and antibody levels, as well as other immunity indicators, following the administration of the vaccine.

So far, this vaccine has shown its effectiveness in several animal trials, even against the SARS-CoV-2 Delta variant.

If commercialised, it is likely to be used primarily in developing countries, where vaccination rates are low due to the logistical challenges of using currently available vaccines. – AFP Relaxnews

It's not difficult to boost your immunity naturally 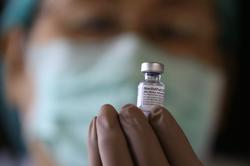 ‘Plant’-ing that zen feeling around your home
Spotting your child's learning disability early
The digital healthcare generation gap in Malaysia
After battling Covid-19 in a district hospital, this surgeon gets to go home Premium
Keeping children safe and healthy in the water
Report: Third dose not needed for now
Herd immunity for Covid-19 is unlikely to be achieved
When to self-test for Covid-19 and preparing to quarantine
Resonating With Malaysian Lifestyles
Air quality improved, then deteriorated again