Psoriasis is a skin condition which causes red, crusty patches of skin covered with silvery scales called plaques to appear on one’s body. However, it is not infectious. – Photos: Shutterstock

You might have heard of psoriasis, seen someone who has the condition or even be related to someone with psoriasis.

But how much do you really know about the disease?

Psoriasis is a skin condition that causes red, crusty patches of skin covered with silvery scales called plaques to appear on one’s body.

It is a disease that is characterised by inflammation caused by dysfunction of the immune system.

When the immune system becomes overactive, it speeds up skin cell growth.

Normal skin cells completely grow and shed in a month, but with psoriasis, this process is accelerated and takes just three or four days. Then instead of shedding, the skin cells pile up.

According to consultant dermatologist Dr Peter Ch’ng, psoriasis is a chronic immune-related disease.

“I always tell my patients if your immune system starts attacking your own skin, then it is something chronic or long-term. It’s not just a temporary condition that you can easily fix.

“What’s more is that it also affects other parts of your body. This inflammation can be delivered through the bloodstream.

“Imagine a fire going through the brain, through the cardiovascular system to the heart, and other areas of your body, ” he says.

He explains that it is easy to diagnose the condition.

“Psoriasis is determined by clinical diagnosis.

"This means that doctors will conduct a physical examination, and by looking at the site, we are able to diagnose if we see the classic symptoms.

“No blood tests or imaging tests are required for this.”

Compared with other types of rashes like eczema, Dr Ch’ng says, the colour and scales of psoriasis are different.

He notes that the classic symptoms are a rash that is usually salmon pink in colour and well-demarcated, and patches of skin that are thickened and have silvery scales.

One of the big myths associated with the disease is that people think it is infectious.

“Psoriasis can look pretty bad, with a lot of scales. So if you are not aware of the illness, you may think that it is infectious.

"People may perceive it to be like the leprosy of yesteryears, whose sufferers used to be shunned.”

Unlike leprosy, however, Dr Ch’ng emphasises that psoriasis is not infectious and that there needs to be greater awareness of this so that the stigma associated with the disease can be stopped.

So, how exactly does one develop psoriasis?

“We know there’s some genetic component in it, which means that if one or both of your parents have it, there’s a high chance you will acquire it too.

“Environment, we think, also plays a role. However, there is no conclusive evidence yet about what kind of environment can cause psoriasis, ” he says.

Not just a skin disease The inflammation caused by psoriatic arthritis often leads to anatomical changes that result in deformity.

One of the common misconceptions about psoriasis is that it is just skin deep.

In reality, it is associated with many comorbidities.

There is a higher risk of developing conditions like diabetes, stroke and heart disease, Dr Ch’ng shares, adding that many also suffer from psoriatic arthritis – all of which can result in irreversible damage to the body.

“Psoriatic arthritis is the inflammation of joints. Often, this inflammation causes anatomical changes in the long term that result in deformity.

"If you already have a deformity because of the arthritis, then even if you start on treatment for psoriasis, those changes are irreversible, ” he cautions.

The rashes can also cause excruciating itching, burning, soreness and even bleeding.

Beyond this, as the disease progresses, it may also give rise to psychological effects, including depression and anxiety.

"For example, one may be stared at while they are at the swimming pool or they may be rejected by a hairdresser, their sexual lives are affected, and the disease also dictates how they dress and present themselves to the public.

“In a nutshell, psoriasis is not just about what’s on the body surface, but affects the quality of one’s life too.

“The extent to which it can affect a person depends on what their profession is and how they respond to it.

"For example, if you were a model, and you developed psoriasis, it would cause you much distress and your self-esteem would probably be badly shaken, ” he says.

When it comes to a skin condition, people probably think there are lots of dietary restrictions, but that is not the case.

“There are actually no restrictions, except for alcohol. We know alcohol can act as a trigger.

“With older treatment such as methotrexate and acitretin, there was the potential of the medication causing hepatitis (liver inflammation).

"So if you drank alcohol excessively, the chances of hepatitis would also increase, ” Dr Ch’ng says.

However, he notes that psoriasis is strongly associated with metabolic syndrome, which includes obesity, cholesterol, diabetes and hypertension.

And when there is increased risk of these illnesses, then your diet would naturally have to take into account these other issues.

“For example, ” the doctor says, “if the patient is diabetic, they would have to avoid sugar.”

Dr Ch’ng also brushes away old wives’ tales about seafood or beef being bad for the skin, advising instead for one to eat healthily.

And when it comes to exercise, he urges those with psoriasis to lead a normal life.

“You don’t have to restrict how you dress, exercise or work.

“Once you start the right treatment and clear your skin, you can go back to living your daily life how you once did, ” he says.

If it’s not diet or activity, what then triggers psoriasis?

This mnemonic, TIMES, may come in handy, he says, when you’re trying to narrow down what could be causing your condition to flare up:

While there is not yet any cure for psoriasis, the disease can be well-controlled with medication, with early treatment being essential.

‘Even though there’s still no cure for psoriasis, treatments are getting progressively better. One day we will hopefully find a cure,’ says Dr Ch’ng.There are many types of treatment for psoriasis: topical, phototherapy and systemic (oral or through injection).

“Topical treatment is the use of creams. For instance, moisturiser is very important because a patient with psoriasis has very dry skin.

“The second reason for using topical treatment is to deal with the inflammation, and steroid creams, as well as Vitamin D creams, are used for this purpose, ” says Dr Ch’ng, adding that steroids can be very strong and cause permanent thinning of the skin, so it is important to get expert advice on which steroid cream to use.

This can be effective for some people. But if someone has extensive psoriasis, he or she would have to use a full-body phototherapy “cabin” at least three times a week.

“Logistics-wise, this may not be so convenient, as the patient would have to go to the hospital or clinic three times a week. If they live far away this could be inconvenient and take up too much time.”

There is also systemic treatment, wherein steroids are ingested either orally or through injection, but Dr Ch’ng warns against these methods for psoriasis.

“While one might find relief in the short term, there are likely to be side effects in the long run, for example, obesity.

“With oral medication, such as methotrexate, which was used in the past, we had to monitor for potential side effects, by conducting a liver function test and checking to see that the white cells didn’t drop.

“With cyclosporine, we also looked at the kidney and monitored blood pressure.”

One of the newer types of treatment associated with psoriasis is biologics.

According to the US Food and Drug Administration (FDA), biologics can be composed of sugars, proteins or nucleic acids, or complex combinations of these substances, or may be living entities such as cells and tissues.

Biologics are isolated from a variety of natural sources – human, animal or microorganism – and may be produced by biotechnology and other cutting-edge technologies.

According to the US FDA, biological products often represent the cutting-edge of biomedical research, and in time, may offer the most effective means to treat a variety of medical illnesses and conditions that presently have no other treatments available.

Dr Ch’ng says that the biologics currently being used to treat psoriasis act as antibodies to block the problematic cells, and that long-term studies show the efficacy and safety of these new medications.

Treatment for psoriasis these days is very good, and the disease can be properly controlled.

According to the dermatologist, there is a very big difference from treatment two decades ago, when smelly creams using tar were used.

Today, the creams are a lot easier to tolerate, and patient care has improved.

Dr Ch’ng also believes that the doctor-patient relationship is a two-way path.

More than just treating a condition, he empathises with his patients and adjusts treatments based on each patient’s lifestyle.

“Today we try to clear every rash on the body, that is our ultimate goal, ” he says.

“Not only has the treatment changed, but our goals and targets have changed too.

“And even though there’s still no cure, things are getting progressively better.

"One day we will hopefully find a cure. Until then, we have to control this disease really well.

"Remember there are comorbidities with irreversible effects. The key is stopping the disease from spreading by seeking early treatment.”

He also notes that treatment can be costly, depending on the severity of the condition.

His message to the public, meanwhile, is to be mindful that the disease is not infectious and that you can make a difference in the life of a psoriasis patient.

“If you know someone who has psoriasis, try and empathise with them.

"Remember that their well-being, self-esteem and quality of life have all been challenged by this disease.

“Be a supportive spouse. Be a good listener or encourager to your friend or family member.

"Maybe you have to approach them in a different manner.

"At the end of the day you can make a difference to how they view themselves and cope with the disease.”

This article is a community message brought to you by Novartis Corporation Malaysia. 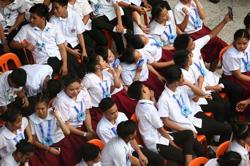