'Vampire' disease could kill you, but doctors may have found a cure

Dr Schneider (in coat) with the family that has three sons with XLHED, two of whom have been treated successfully.

Doctors in Germany have successfully tested a cure for a rare congenital disorder that makes people resemble vampires, with fang-like teeth and an aversion to sunlight.

The condition, known as hypohi­drotic ectodermal dysplasia (HED), is characterised by impaired development of sweat glands, which can lead to life-threatening hyperthermia. That means exposure to direct sunlight that overheats the body is dangerous.

Other features of HED include missing and unusually pointed teeth, dry skin, and fine, sparse hair. Tear glands can be affected as well. At the greatest risk of dying from the disorder are children under the age of two years in whom it goes undetected.

“They look like little vampires,” says Dr Holm Schneider, senior physician in the Paediatric Department of Erlangen University Hospital (UKE) and spokesman for the Erlangen Centre for Ectodermal Dysplasias.

Foetuses with so-called X-linked hypohidrotic ectodermal dysplasia (XLHED), such as the twin boys who were successfully treated, lack a protein called ectodysplasin A1 (EDA1), which plays an important role in the development of teeth, hair and sweat glands.

About one in 30,000 children are affected – too few to pique the interest of the pharmaceutical industry to produce a medicine to treat it. According to Dr Schneider, the mortality rate in Europe is between 2% and 20%.

In February 2016, he and Dr Florian Faschingbauer, senior physician in the UKE’s Department of Obstetrics and Gynaecology, undertook what the university hospital says was the world’s first attempt to cure the condition prenatally: by injecting the missing protein into the womb of a woman pregnant with twin boys.

The woman, now 40, has an older son, now five, who “didn’t cry any tears”, still had no teeth at age of two – he now has three pointy ones – and often felt hot, she says. A genetic test revealed that she has the defect, whose effects are usually less pronounced in females, and had passed it on to her son.

“I cried all night” after learning the test result, she says.

When she later became pregnant with twin boys, an ultrasound scan of the foetuses showed that they too had XLHED, as they were largely missing dental germs, the embryonic structures that give rise to teeth.

So, she and her husband decided to take the “chance to make the children’s lives easier” and try the new therapy. In the 26th week of her pregnancy, the doctors injected 28 millilitres of the missing protein into the amniotic sac, and then 15ml in the 31st week.

The protein entered the foetuses’ bloodstream via a certain receptor in their guts after they swallowed amniotic fluid, the doctors explain. Now aged two, the boys can perspire normally.

The doctors examined the soles of their feet and palms of their hands with a microscope and found “they have just as many sweat pores as a control subject the same age”, Dr Schneider says.

The therapy was also performed on another pregnant woman, who only received one injection however, because the EDA1 protein was no longer available. Her son has a “somewhat lesser ability to perspire” than the twins”, Dr Schneider says, “but it’s sufficient at our latitude.”

The doctors published their findings in The New England Journal of Medicine on April 26, 2018.

In earlier trials, they found that the therapy is effective only when performed before birth, since sweat glands form between the 20th and 30th week of pregnancy. They say it could possibly be used for other congenital defects as well, such as cleft palate.

Dr Matthias Beckmann, head of the UKE’s Department of Obstetrics and Gynaecology, points out that replacing a missing protein, rather than correcting a defective gene, is “certainly a simpler approach”.

With the help of a non-profit foundation, the doctors plan to conduct a large clinical study next year aimed at securing approval for the new method of treatment.

Dr Amir Yazdi, spokesman for the Centre for Rare Skin Diseases at Tuebingen University Hospital in Germany, says it’s still too early – and there have been too few patients – to tell whether the method has long-term side effects. But he adds that he can hardly imagine any, since “no genes are modified”. – dpa

'Vampire' disease could kill you , but doctors may have found a cure

Covid-19: Vietnam's last critical case - a British man, is on the mend; no local cases for 50 days 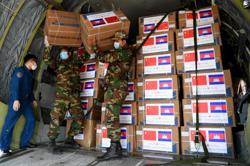