At first glance, 36-year-old Chaw is no different from the average modern Malaysian woman.

Seizing the day as a career woman and taking short breaks to ensure she recharges, she has an effervescent personality and an infectious smile.

She also won a fight for her life against a large brain tumour two years ago.

In July 2014, Chaw experienced weakness on the left side of her face. She complained of hearing loss and tinnitus (ringing in the ears).

Further investigations revealed that she had a brain tumour.

Chaw’s brain tumour measured approximately 3cm in diameter. Nestled between her brain stem and left cochlea, the tumour had impeded her hearing and caused numbness to the left side of her face.

With the tumour so close to her brainstem, her vital functions such as heart rate and breathing could be affected if it continued to grow.

Any tumour that measures 2cm and above is considered large – the problem with that is the risk of the patient becoming paralysed in the face.

This is not an acceptable fate for a 36-year-old who is still in the prime of her life.

After consultation, Chaw went through a clear-cut, minimally-invasive solution for her condition – Gamma Knife.

The Gamma Knife, despite its name, is no knife or scalpel, but radiosurgery that uses powerful doses of radiation to target and treat diseased brain tissue, while leaving surrounding tissue intact.

The “knife” refers to 192 precise beams of radiation that attacks tumours and abnormalities, shrinking them over time or stopping their growth.

There are no incisions in the patient’s head. Instead, very precisely focused beams of radiation are directed to the treatment area in the brain.

By focusing beams of radiation towards specific areas in the brain, it dispenses a precise dose of radiation to the target according to its size and shape without harming the surrounding, healthy tissue.

The beauty of Gamma Knife is the exact precision that it is capable of.

In Chaw’s situation, precision was necessary due to the location of the tumour. Since it was close to the left cochlea, any radiation to the cochlea could have affected her hearing ability, hence the importance of preserving her ability to hear.

Modern neurosurgical treatments have progressed in such a way that the risks have decreased quite dramatically over the last 10 years.

Teamed with careful and strategic consultation by an experienced surgeon, the success rate of neurosurgery can improve quite dramatically.

In Chaw’s case, the size and location of her tumour drew several concerns.

Amongst the concerns was the potential of Chaw experiencing swelling of her tumour after a Gamma Knife treatment without traditional surgical intervention.

This situation could complicate the treatment of her condition even more.

With that in mind, she was advised to consider traditional surgery where a portion of the tumour was removed to increase the efficacy of Gamma Knife treatment.

This was the start of her journey to recovery.

Following her decision to proceed, surgery was performed to remove a portion of Chaw’s tumour.

Following that, she recuperated at the hospital for one week before being discharged.

A month later, Gamma Knife treatment was administered in a session that lasted 65 minutes.

Chaw was discharged home 24 hours after treatment. She elected to take a leave of absence from work for the two months after that.

In that time, she carried on with light household tasks, and even made time to include light exercises to her routine.

Chaw recalled that the treatment was quick and pain-free. Apart from the Leksell frame helmet that was slightly heavy, she did not feel any discomfort.

She did feel a slight headache in the days that followed, but it was manageable and faded soon after.

Today, Chaw has regained the sensation to the left side of her face. Her ability to hear from her left ear has not deteriorated further.

Dr Chee Chee Pin is a consultant neurosurgeon. For further information, e-mail starhealth@thestar.com.my. The information provided is for educational and communication purposes only and it should not be construed as personal medical advice. Information published in this article is not intended to replace, supplant or augment a consultation with a health professional regarding the reader’s own medical care. The Star disclaims all responsibility for any losses, damage to property or personal injury suffered directly or indirectly from reliance on such information. 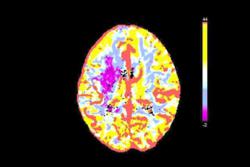