Women who are experiencing perimenopausal symptoms may find relief in gua sha, a traditional treatment.

A Chinese medicine technique using a smooth-edged instrument to scrape or rub certain areas of the body may relieve troublesome symptoms women experience in the years leading up to menopause, according to a new study.

Perimenopause, or premenopause, can begin eight to 10 years before menopause, as oestrogen levels fluctuate and start declining but menstrual cycles continue. During this time, and for another year or more after menstruation stops, women may experience hot flashes, insomnia, tiredness, mood swings, forgetfulness, aches and pains, vaginal dryness and pain during sex.

It’s estimated that 75 to 92% of women going through perimenopause have at least some of these symptoms, and about 40% find them problematic enough to seek help, the study authors write in the journal Menopause.

Gua sha therapy is one of the most commonly used techniques in Traditional Chinese Medicine, they add, and it’s thought to work by enhancing surface circulation and producing an antinflammatory effect.

Past studies have found it may prevent or treat many common and frequently-occurring conditions, such as acute or chronic pain, colds, flu, fever, heatstroke, asthma and emphysema, Duan said.

For the study, researchers recruited 80 women with perimenopausal symptoms from a clinic at the First Affiliated Hospital of Nanjing University of Chinese Medicine and divided them randomly into two groups.

One group received only conventional treatment, in this case drinking a liquid derived from traditional Chinese herbs called Qingxin Zishen Tang twice daily. The other group received the same conventional treatment plus weekly 15-minute Gua sha sessions, in which a therapist used a buffalo horn scraper and a skin lubricant to stimulate “acupoints” similar to those targeted by acupuncture focusing on the back, lower limbs and upper limbs for eight weeks.

Gua sha scraping causes red or purple marks on the skin which typically fade within seven days, the authors note.

Women who received gua sha treatments had reductions in perimenopausal symptoms such as hot flashes and sweating.

After eight weeks, scores on a menopause-specific quality of life questionnaire had improved for both groups of women, but significantly more for the women in the Gua sha group. They also experienced greater reductions in hot flashes and sweating, insomnia, nervousness, melancholia, fatigue and headache than the comparison group receiving only conventional treatment.

The available studies on this topic are few and weak, said Dr Francesco Cardini of the Health and Social Regional Agency in Emilia Romagna in Italy, who was not part of the new study.

"As with other traditional practices, Gua sha treatment, which creates superficial transitory skin lesions, may not be accepted by women with non Chinese culture," Cardini told Reuters Health by email.

“Gua sha therapy for perimenopausal symptoms was well tolerated by participants in our study,” Duan said. “Only two transient and mild adverse events were reported and no serious adverse events occurred. Both were deemed unrelated to Gua sha. The two cases both had mild dizziness; one was caused by hypoglycemia because the patient did not eat breakfast, and another one was too nervous at the first treatment.”

The long-term benefits of Gua sha therapy are not known, Duan said. Theoretically, women in China have access to this therapy, but only at large Traditional Chinese Medicine hospitals.

“Women who live in rural areas have to travel a long way to the cities to get the therapy, which is inconvenient,” Duan said. “If women have the access to Gua sha therapy, they should try it.” – Reuters/Kathryn Doyle

Chinese and US militaries to enhance dialogue 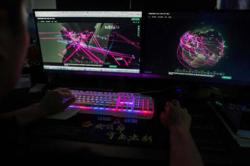