A ball for working the body and mind

WHO would have thought that cutting a stability ball into half would lead to the creation of an innovative fitness training apparatus?

Well, that’s what David Weck, inventor of the Both Sides Utilised Training (BOSU) ball, did. He kept falling from the stability ball while trying to stand on it, and frustrated, he cut it into two.

That was in 1999 when functional training was starting to emerge, and since then, the revolutionary invention has taken the world by storm. Now, the BOSU ball is a common fitness equipment found in gyms and is used widely among professional athletes.

“I was in New York City and injured my back from a motorcycle mishap. My lower back hurt for a year, and traditional physical therapy or alternative treatments did not work for me,” recalls Weck, during a recent trip to Malaysia. “So I started working on the stability ball to rehabilitate and discovered that the balance and core training provided relief from my pain. Standing on top of the ball was beneficial for coordination, but I would continually fall. One night, I had a nasty fall, and that was when I thought it might be easier if I cut the ball into two.”

That night, he went to sleep with a gut feeling that he was onto something big. The next morning, he cut the ball, put a cardboard underneath and created a prototype. With it, Weck fully rehabilitated his lower back and a recurring plantar fasciitis problem, applied for patents, and thus, a new “star” was born.

Originally, the name BOSU was an acronym for “Both Sides Up”. It meant that the BOSU ball could be used on either side, i.e. the dome or the platform.

The American says, “Initially, I was going to call it Balance Turtle, but the authorities wouldn’t allow it!”

Weck was doing personal training at that time and introduced his gadget to his clients, ranging from ages nine to 86. They loved it. He even had one client with the autoimmune disease multiple sclerosis who used it to develop better coordination, balance and strength.

“All my life I have loved to exercise and explore better ways to get more from my training. I’ve been called a ‘mad genius’ (fortunately, it was said as a compliment), and also, a ‘visionary’ in the fitness world. I’m certainly not afraid to think outside of the box, which has led to some profound discoveries like creating the BOSU ball, which I’m extremely proud of,” he shares in the BOSU Fitness website.

Weck explains that the BOSU ball is how the human body is designed to move and function most efficiently.

“Alternating bilateral coordination of both sides of the body is the common thread in crawling, walking and running (fundamental to humanity). The hips, legs and feet work opposite the shoulders, arms and hands, in a balanced ‘equal and opposite’ relationship. It also balances the right and left hemispheres of the brain.” 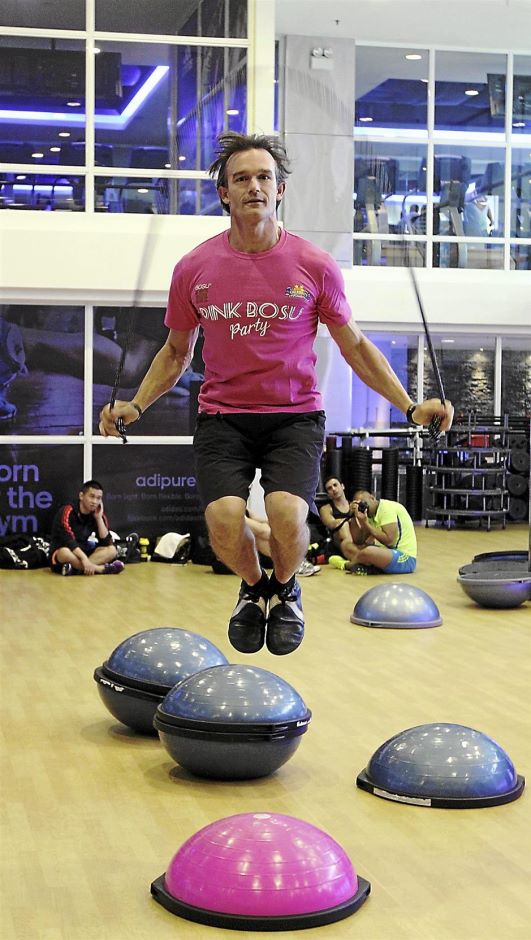 The BOSU ball can be used to increase cardiovascular endurance and strength.

The basics of BOSU training are dictated by the structure and function of the human body. Two principle objectives are the balancing of left and right sides (control of centre through symmetrical rotation), and the timing efficiency during the down/up movement. Improving these two fundamental capabilities fortifies the foundation for enhanced performance in all movement, sports and life.

It doesn’t matter if you’re facing the toughest competition of your athletic career, looking to return to a fitter you, or just starting out. There are plenty for options with the BOSU ball. Besides helping reduce injuries, it aids in agility, core stability and coordination.

“There are many things you can do with it such as assembling a combination of moves that work together. Basically, it’s like a chef cooking with lots of ingredients thrown in. You have to experiment to create new things,” says Weck, who is in the midst of training runners, including US sprinter Tyson Gay, on the BOSU ball.

He adds, ”We’re now using it for anti-ageing properties. Exercise can transform lives and we’re making a big push into that market as healthcare is a big issue worldwide.”

The 43-year-old’s love affair with sports dates back to the time he hit puberty and his testosterone began to flow.

“I used to spend hours at the library combing through microfilm (this was before the Internet) researching various training techniques and the latest science in sports training.

The weightroom was like a second home for me in high school and in college.

“I’m a voracious reader and used to be a full-fledged anatomy and physiology geek. I draw tremendous influence from the works of Moshe Feldenkrais, Ida Rolf and F.M. Alexander – some of the pioneers in somatic (body) education. I’ve continued to expand my knowledge in diverse areas including traditional Chinese medicine and tai chi chuan.”

He has now begun incorporating props such as skipping ropes and sticks to create a unique BOSU workout.

“These days, I don’t lift heavy weights very often like I used to. But, I perform exercises with ropes and sticks/bars that most ‘stronger guys’ simply can’t handle - because they don’t train the way I do. As a result, my movements are fluid and my strength is spiral in nature. I’ve never been more athletic! I wish I knew all this at 14,” Weck says. 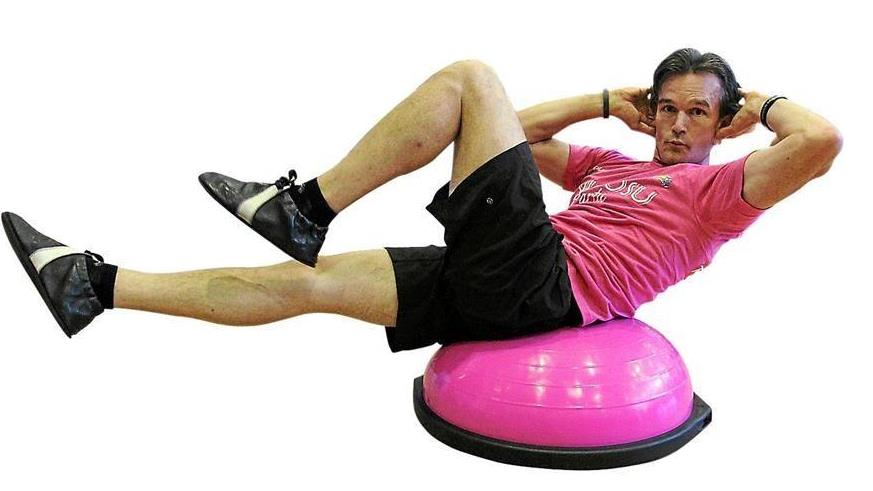 One gets better balance, coordination and core stability by using the BOSU ball.

He reckons rotation is the key to human movement as there are no straight lines in the body. Anyone, irrespective of age, can benefit from using the BOSU ball anywhere from one to three times a week.

Weck offers, “Just standing on the ball while watching television is enough to engage some muscles. Doing simple things like holding something while you do this makes it more challenging. BOSU is not just a product, but a training concept.”

He cites his favourite exercise as standing on the dome side of the ball, on one leg, with eyes closed. There is very little risk involved in this (you can always open your eyes and step down) but it works the core stability and balance.

Already, the US Olympic track and field, and ski teams use the BOSU as part of their training. In Asia, Weck says the seeds have just been planted.

“My goal is to leave a legacy in the fitness world, forever changing the way people fundamentally work out, move their bodies and their overall approach to fitness. I’m doing this by rebranding BOSU from meaning a half-blue ball to an entire training methodology,” he says.

A ball for working the body and mind