Developments in medical science, especially in the area of imaging techniques to place needles or catheters in different areas of the body to evaluate and/or treat a variety of conditions in a minimally invasive fashion, have given women different options when its comes to treating different conditions. One example is uterine fibroids.

WHAT are uterine fibroids? Are they common? A uterine fibroid (known medically as a leiomyoma, or simply myoma) is a benign (non-cancerous) growth composed of smooth muscle and connective tissue. Fibroids are the most common benign tumours in women. Fibroid sizes can range from pea sized to bigger than a cantaloupe and can grow inside or outside the uterus.

Fibroids of more than 9kg have been reported. Where they grow determines what type of symptoms you experience. About 40% of all women over the age of 35 have fibroids. Fertility is often affected. The bulk of hysterectomies carried out are due to fibroids.

What are the causes of uterine fibroids?

No one knows exactly what causes fibroids. They can appear at any age, but usually occur just before menopause. Research suggests fibroid development may be related to oestrogen levels.

At what age will women have uterine fibroids? Why do fibroids develop at this age?

Approximately 40% of all women over 35 have fibroids. It may be that you don’t have any symptoms. Fewer than half of the women who have fibroids never experience any symptoms at all. Most women don’t even know they have fibroids until their physician examines them during a routine pelvic exam. If you fall into this category, all you probably have to do is watch to see that they don’t grow in size. Doctors call this “expectant management”.

Fibroid size can range from pea size to bigger than a cantaloupe and can grow inside or outside the uterus. Where they grow determines what type of symptoms you experience. Fibroids originate from the thick wall of the uterus and are categorised by the direction in which they grow:

Intramural fibroids grow within the middle and thickest layer of the uterus (called the myometrium). They are the most common fibroids.

Subserous fibroids grow out from the thin outer fibrous layer of the uterus (called the serosa). Subserous can be either stalk-like (pedunculated) or broad-based (sessile). These are the second most common fibroids.

How many Malaysian women are currently experiencing symptoms from uterine fibroids?

I am not sure about the exact figure as there doesn’t appear to be any studies carried out on this.

Do uterine fibroids interfere with fertility or pregnancy? Will these become malignant later on if not treated at all?

There are several possible effects: 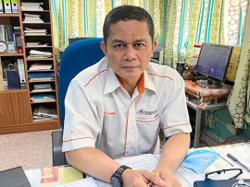