Steam rises from a gourd filled with yerba mate as Wissam al-Halabi takes a sip, seated on a Lebanese mountain slope where the South American drink has become a local tradition.

For more than a century, the mountain folk have been enjoying the slightly bitter hot drink, pronounced “yer-bah mah-tay”, far from its origins half-way around the world.

It is particularly popular among adherents of the secretive Druze faith, who are scattered throughout the eastern Mediterranean’s Levant region, mostly in Lebanon and Syria.

“It’s from Argentina originally and we’re told it came here hundreds of years ago, brought by Lebanese migrants who came back from there,” says Samah Halawi, a Druze sheikh.

Latin America became a prime destination for economic migrants from the Levant, particularly in the late 19th century, and a large community of their descendants still exists in Argentina and elsewhere in the region.

Halawi sports the white knit hat, thick moustache and loose pleated sherwal trousers that are traditional attire for the religious class of the Druze community.

And he considers the signature mate gourd and silver bombilla (bahm-bee-zha) straw to be just as traditional as his clothing.

“It’s a social drink; we drink it together. Me and the guys get together often and drink as a group.”

Yerba mate, made from the leaves of a rainforest holly tree, has been cultivated in South America for centuries. It is particularly popular in southern Brazil, Uruguay, Paraguay and Argentina, which dominates exports of the tea to Lebanon and neighbouring Syria.

In 2012, Argentina exported nearly 1,500 tons of mate to Lebanon, making it the country’s third-biggest market, according to the International Trade Centre, a UN and World Trade Centre agency.

Syria, with a population more than five times that of Lebanon, is Argentina’s biggest mate market, importing more than 24,000 tons in 2012.

The drink’s popularity there has not been affected by the conflict and even crosses battle lines, with both regime troops and rebel fighters spotted imbibing. 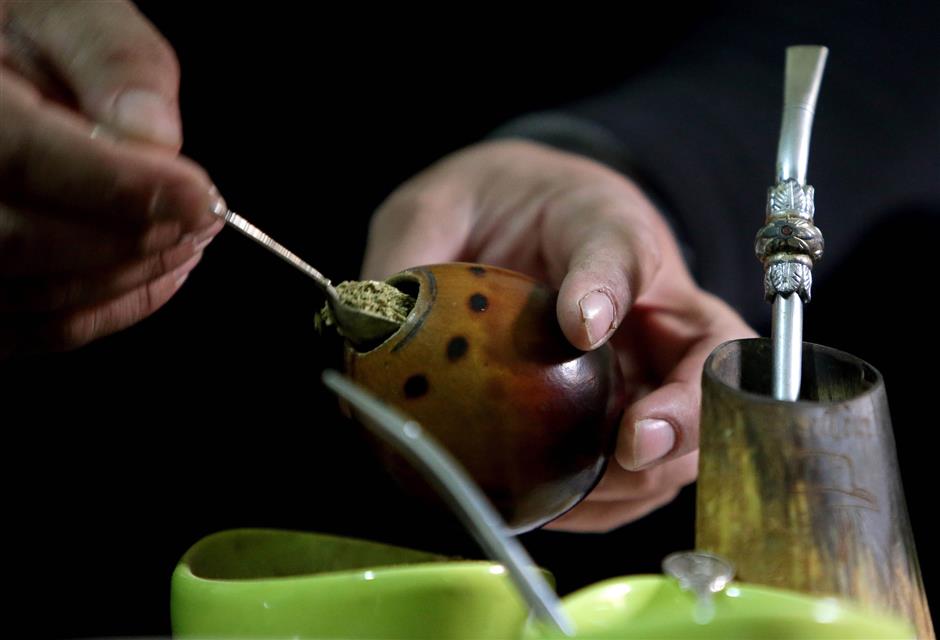 For Halabi, who works at a hotel in the bucolic mountain setting of the central Lebanese town of Barouk, a midday break for mate is as necessary as a coffee or tea break anywhere else.

“Usually, if I know my friends are in the area, I’ll call them up and say I’ve put the kettle on and I’m getting ready to make some mate. Come over and let’s drink together.”

On a brisk afternoon, he sat with three friends around a small fire encircled by several bricks supporting a kettle.

They passed around biscuits and sweetened bread as they discussed their favourite brands and the health benefits of the drink.

Halabi and several other locals prefer the Argentinian brand Amanda, because it has a mild taste and can be drunk with or without sugar.

He recommends a bitter preparation for a post-meal digestive aid, and insists that the drink also helps “clean the kidneys”.

Ghada al-Halawi, another Barouk local, likes to drink mate first thing in the morning, instead of coffee or tea.

“We don’t feel like we’ve woken up until we drink it!” she laughs, preparing both bitter and sweetened versions in traditional gourds that some locals make at home from dried out squash shells.

She also keeps a ceramic Amanda-branded gourd on hand to prepare mate with hot milk instead of water, saying the milk flavour spoils squash gourds.

Wissam Hamdan, who grew up drinking mate in his village, decided to introduce the drink to a wider audience. In 2005, he opened The Mate Factory, a restaurant in the picturesque mountain town of Aley, near Beirut.

“A very big percentage of our customers are people who want to try it, because it’s something that’s specific to certain areas in Lebanon,” he told AFP.

He imports around five tons a year from Argentina, blending his preferred leaves, and offers peach and lemon flavoured mate along with traditional types.

For a little less then US$7 (RM23) customers get a tray with the tea, hot water and snacks.

Hamdan says the formula has been successful, and on weekends he also offers “mate-karaoke” nights, serving mate-infused alcoholic drinks.

Such innovations are far from the ritual observed in Ghada al-Halawi’s home.

She likes to serve the drink with the dried figs, raisins and nuts that are traditional snacks in the area, though she adds that chips and biscuits that have become more common.

In between each drinker, she cleans the bombilla with two pieces of lemon rind, which lightly flavour the straw.

The drink is best enjoyed with guests, she says, and she begins heating water as soon as visitors arrive at her house near a forest of Lebanon’s famed cedar trees.

“When someone comes to your house, you have to make mate for them,” she insists.