Meat on the grill.

The most astonishing of fads seem to come from Korea, and now, it’s colourful meat.

KOREA’S “rainbow pork” is creating ripples around the globe, from Seoul to Taipei, Singapore, Melbourne, and Los Angeles.

It’s now in Kuala Lumpur, and thankfully, the line at Palsaik in Solaris Mont Kiara, especially at dinnertime, has somewhat tapered off after three months.

“Pal saek samgyupsal is a very famous food in Korea,” says Chung Sung Mok, the managing director of Inno8 Food Sdn Bhd, the master franchise holder of the Palsaik Korean BBQ brand in Malaysia. “It is so famous that a pal saek meal is nearly always included in a tour group’s itinerary,” he adds. 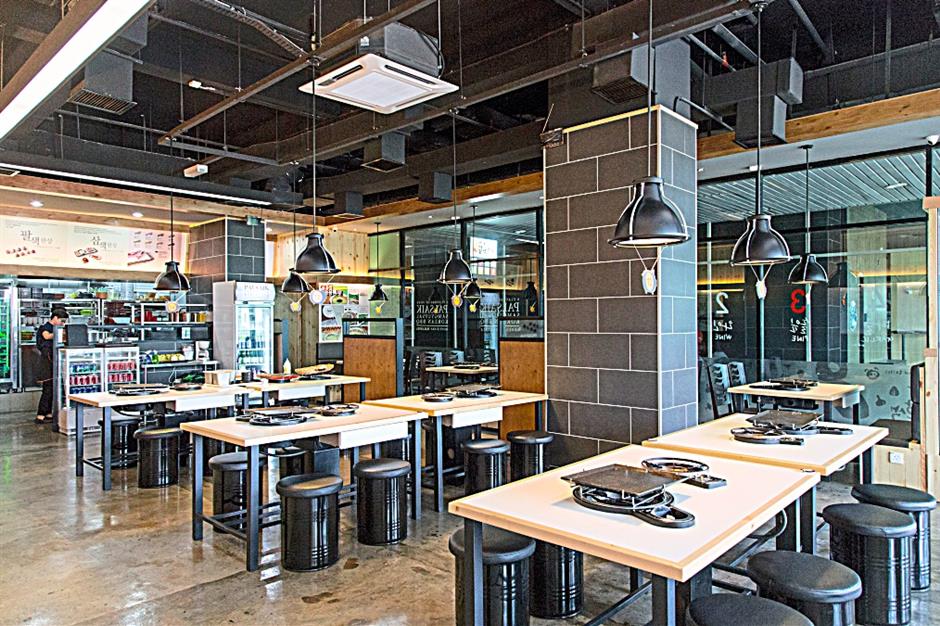 Everything at Palsaik is patented, including the grill and burner design.

“The Palsaik brand is the market leader of pal saek in Korea. It prides itself on a strong R&D team to constantly create new taste experiences, and refining the way people enjoy pal saek.

“When my Malaysian partner was searching for a food concept to capitalise on the Korean wave, I knew that we would find a winning formula in the Palsaik brand. This is because Palsaik has modernised the concept of Korean barbecue. You won’t find Palsaik restaurants serving bulgogi or bibimbap. Palsaik restaurants specialise in pork.”

The traditional samgyeopsal is unseasoned belly pork cooked on a grill with kimchi, garlic and onions, and then dipped in sesame oil or salt, and eaten wrapped in lettuce leaves.

“Palsaik invented the eight colour concept where prime belly pork is marinated in eight different flavours, namely ginseng, wine, pine needles, garlic, herb, curry, soy bean paste and hot pepper sauce. The eight varieties are presented on a platter, the meat arranged in ascending order from the most lightly flavoured to the strongest tasting,” shares Chung, a Korean national who has lived in Malaysia for 16 years. The rice soaks up the remaining soup as it is being fried.

The kitchen regulates the fat percentage of the pork served at Palsaik as oil is not used in the cooking process. Beef is available at lunchtime, but it’s all about pork at dinnertime, which is why its marinades are so important.

As Chung puts it, “If you are going to serve only one meat, it will fall to the marinades to make a difference.” While good quality meat is used – flavourful enough to make good eating sans seasoning – the eight variants add delicious differentiation to the meat.

Nothing is overly hot or pungent, not even the supposedly hot pepper which is number eight on the Scoville scale, and all of the variants are well-balanced and offer different taste notes to the more refined palate, with the ginseng’s slight bitterness making the pork’s natural sweetness more pronounced, and the pine needles lending a pandan-like infusion to the meat. Garlic and pork have always been a delicious pairing, while the curry gives the pork a Nyonya-esque feel.

The feeling of largesse is possibly what has made Palsaik so popular in countries where large food portions are the norm. Apart from the long platter on which the eight rolls of meat is laid out, there is also an accompanying tray of fresh salad greens for wrapping the cooked meat in.

On the tabletop is a hot pot where an interesting seafood soup is brought to boil. Apart from its rich taste and the generous amount of seafood in the soup (flower crabs, prawns and mussels), the soup’s wow factor is how its colour changes from colourless to a deep orange when heated. The deodeok, a mountain herb.

A Palsaik 8 Colour Set comprises the pork, salad greens and soup (RM112). It can easi-ly satisfy a group of four average eaters. The Premium Set comes with grilled deodeok, a mountain herb known as lanceolate root in English. Koreans supposedly go crazy for this.

Chung says it is one of the food items his countrymen miss most in Malaysia, and he has Korean guests calling up to check if it is available before they come.

The root, when raw, has the texture of an old, woody asparagus, with a taste between that of bamboo shoot and yam. When barbecued, the starches turn to sugar, which tenderises the fibres, and makes it a little easier to chew. The light caramelisation which occurs gives the cooked deodeok the taste of roasted chestnuts.

Also included in the premium set is a special one-year-old kimchi. Strictly for educated palates, this kimchi is more flaccid in texture, with the fermentation adding a musky, preserved plum flavour to the cabbage.

Fried rice is prepared by mixing rice into the remainder of the soup in the hot pot, the plain steamed rice soaks up all the flavour of the soup, resulting in a piquant, hearty dish. Choose the cheese fried rice if you still have tummy room after the meat, because it really is a tasty, if strange-sounding combination.

Palsaik may have been open for just three months, but it has already cemented itself as part of the Korean community’s home-away-from-home experience. Japanese clients have also been receptive to the concept, but locals now make up the largest part of the clientele, with there being a definitive slant towards the younger, K-Pop loving crowd.

Chung came to Malaysia to further his studies and graduated from University Sains Malaysia (USM) with a degree in Engineering. He joined the education and linguistic sector, and is happy to finally realise his dream of being in the food and beverage field. 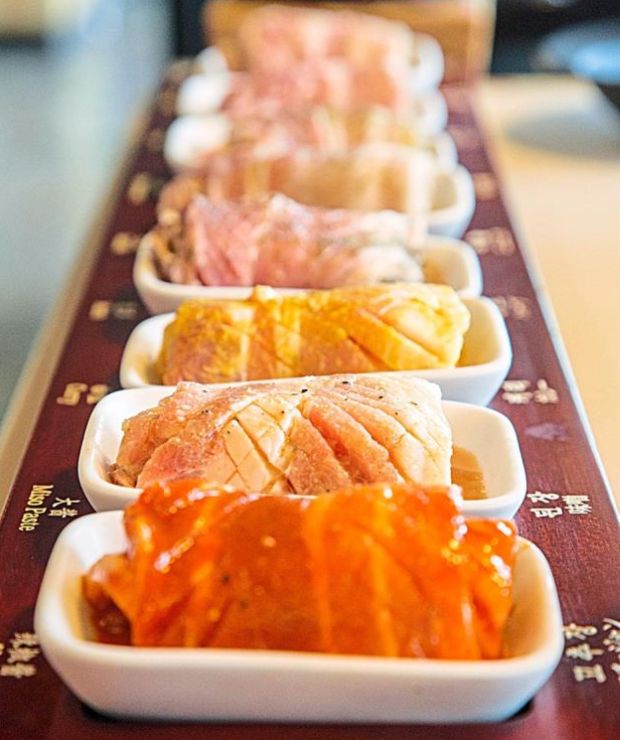 The eight coloured meat rolls are arranged according to taste strength.

“Palsaik is a good concept because everything is standardised. There is a set weight to the meat, and a set marinating time of four hours. It is easy to cook, so the staff does not have to be highly skilled.

“Everything about the concept is patented, from the two-burner system on the table, where there is a place for a grill as well as a soup pot, right down to the order in which the meat rolls are arranged. (And hence, legal action is being instituted against a certain Korean barbecue restaurant in Singapore for copyright infringement.)

It’s another tech triumph that allows diners to walk out of Palsaik without the scent of smoked meat clinging to them. Yes, even the extractor fans are part of standard operating procedures. That’s Korean inventiveness for you!