Cham Har is mixture of two different broth from noodles

A family makes a 'bowl' move with their prawn noodles.

IT is not easy to find a good bowl of authentic Penang Prawn Mee, which exudes the texture, taste and complexity of the original dish found on the island.

Although many hawker stalls in the city sell this popular dish, it is usally prepared by foreign workers. The father of two, who used to run the stall single-handedly, cooks up a storm during lunch hour.

For years, I would stand patiently to tapau a packet of the noodles after school as the coffee shop was always packed to the brim.

I watch as Peter Kang, fondly known as Ah Choon, took down orders and served them himself, rarely making a mistake.

He would often make small talk while packing my prawn noodles.

In November last year, Ah Choon took the bold step of setting up his own restaurant selling what he does best. Kang preparing his popular Penang Prawn Mee at his restaurant.

“My wife and I have been discussing it for a long time but we did not know where to go and when would be the right time,” said the 51-year-old when met at his newly-opened restaurant just a stone’s throw from his former location.

“It all happened so fast that I had no time to inform my regular customers,” said Ah Choon, who has been selling the noodles for the past 30 years.

He learned how to prepare the noodles after leaving school. He spent 13 years with his brother-in-law, who used to run a well-known prawn mee stall but has since retired.

He said having his own space also allowed him to offer more Penang specialities instead of just prawn noodles.

During a visit recently, I tried his Prawn Mee King priced at RM18 a bowl, which comes with small prawns, pork rib, pig’s tail, pig’s intestine, big prawns and squid.

My colleague, Sam, had the Mixed Soup Base noodle, also known as Cham Har, which comes in two different soups and has to be mixed together. 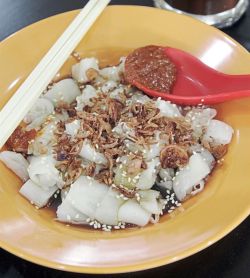 Those who are not as adventurous can stick to the traditional prawn mee with prices ranging from RM6.50 to RM11.50.

We also tasted the Penang chee cheong fun and lobak, which were prepared by his sister and wife.

“My kitchen is now bigger as I have more dishes and they are here to help me,” Ah Choon said, adding that his sister’s speciality was koay teow thng (koay teow soup).

The restaurant also offers tea-break sets of two slices of bread, two half-boiled eggs and a cup of coffee or tea at RM7 or the Penang Nasi Lemak Special with tea or coffee priced at RM10 each.