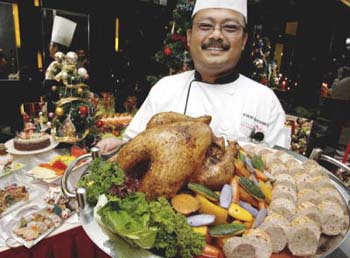 LOVE roast turkey but your dining companion wants sushi instead? Grand Lexis Port Dickson has a solution for you.

The hotel’s Christmas & New Year’s Eve buffet promises a menu that includes holiday favourites and items that appeal to everyone such as sushi, fried rice and noodles.

The star of the buffet, however, still remains the roast turkey, served with either cranberry or red peppercorn sauce.

At the Grand Lexis, medium-sized birds weighing about 3.5kg each are roasted to perfection, with meat that is tender and juicy.

Executive sous chef Zukri Mohamed said he picked smaller sized birds because they would take less time to cook and the meat would not dry out.

“Good turkey should be nice and moist, and not overcooked.

“Sometimes, with larger birds, the longer cooking time can dry the meat out resulting in tough, tasteless turkey,” he said.

Red pepercorn is not a common accompaniment but Zukri said it would be ideal for diners who disliked the sweetness of cranberries and the strong flavour of black pepper.

“Asian diners always like spicy sauces to go with their meats.

“Black pepper is usually the common choice but has a strong flavour, that’s why I decided to go with the subtler tasting red peppercorn,” he said.

Before you start on the turkey, be sure to sample the starters menu first.

There are plenty to choose from including fresh oysters, cold roast beef, sushi and rojak.

Mains on the buffet menu include fillet mignon with paprika sauce, pan-fried fish with a tomato-olive coulis, chicken Adobo, stir-fried prawns with hoi sin sauce and fish curry that diners can choose to have with rice, noodles or a variety of salads.

If you still have room for more, head to the BBQ station for a selection of grilled meats and chicken and beef satay.

Those who like Italian cuisine would be happy to note that a pasta station will be set up at the restaurant.

Chef Zukri and his team wil also be preparing traditional Christmas treats such as yule log cake and gingerbread cookies for dessert.

The tempting array of sweet treats on offer will surely be hard to resist, especially since some of these specialities can only be enjoyed at Christmastime.

Zukri’s favourite seasonal desert is the yule log — a cake with chocolate or vanilla filling rolled to resemble a log.

“The yule log cake used to be a popular holiday dessert but now diners seem to be opting for simpler desserts.

“At Grand Lexis, we have both the traditional and the modern, although the yule log cake takes a bit of work, I think it’s a must for Christmas,” he said.

The Christmas & New Year’s Eve Buffet Dinner (from Dec 22 to 24 and Dec 29 to 31) at Grand Lexis’ Duyung Restaurant is priced at RM88nett per adult and RM42nett per child/senior citizen above 55 years old.

And if your dining companion insists on even more sushi for Christmas Eve dinner, the hotel’s Genn Japanese restaurant is also offering a Christmas buffet of its own.