LOOKS can be deceiving. Take Hannah Tan, for instance.

When she grabbed the limelight after nabbing the second runner-up spot and the “Miss Congeniality” title in the 2002 Miss Global Petite World Finals in Montreal, Canada, not many people thought she was anything more than an attention-seeking airhead. 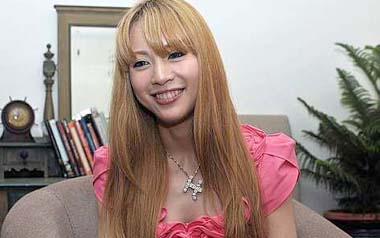 What a dish: Hannah Tan is an ardent foodie,dreamer and music maker.

Fewer still expected she would be in the public eye very long.

It’s been nine years since her emergence, and Tan is still very much around. Still, the fact that she was twice voted by readers of a local magazine as “Malaysia’s most wanted woman” (in 2006 and 2010) makes one think that Tan is not someone you would be able to take seriously.

Then I learn that the petite, Penang-born lass holds a degree in computer science, and, in fact, also won a valedictorian award, thanks to her 4.0 GPA average. And she is a certified financial planner, too.

When the pretty entertainer recounts how she once ate raw goat’s brain in two minutes flat and has savoured bizarre food such as fried crickets, raw chicken and horse meat in her travels overseas, I can’t help but admire her gumption.

“Of course, I’d rather eat salt-baked crabs and boiled prawns dipped in soya sauce any day,” she quips during our dinner at Opus Bistro’s cosy Private Dining Room.

Calling herself as a dreamer, music maker and foodie, Tan says she has enjoyed helping her mother in the kitchen since she was 16. 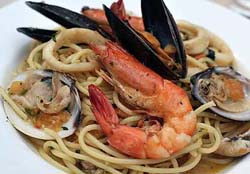 “Cooking is a great stress reliever for me. I can cook a wide variety of dishes – from pastas and pizzas to nasi lemak and shepherd’s pie,” reveals the busy singer-songwriter, actress, model and TV personality, who admits she doesn’t exactly have much time to spend in the kitchen these days.

Tan is the first local artiste to launch her own iPhone application. It allows her to interact with fans and update them on her activities via various social media channels. Tan even manages to record a quick video log for her official website during our interview.

“Ooh, this Shellfish Surprise (RM26++) tastes awesome! I love the tomato-based broth’s tangy-briny flavours which is balanced by the sweetness of the mussels, squid, and prawns,” she enthuses after sampling a spoonful of Opus’ signature soup.

She says the Cream of Mushroom Soup (RM20++) needs a bit more salt but admits that it’s better for the chef to go easy on the salt than to be liberal with it. 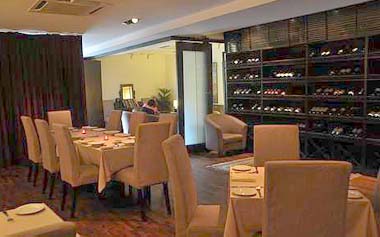 “It’d be a shame to overwhelm the woody nuances of the button, portobello and dried porcini mushrooms that give this rich soup such exquisite rusticity,” she says.

How does Tan maintain her trim figure?

“I work out at the gym at least twice a week and do lots of stretching exercises in between. Breakfast is the most important meal of the day for me, so I usually have cereal with yoghurt. I don’t skip meals or deprive myself of eating anything. It’s best to eat moderately, though I do take a multi-botanical liquid supplement to ensure my body gets all the essential nutrients it needs,” she explains.

As we proceed to relish the sumptuous Spaghetti Ala Opus (first course RM22++, main course RM36++) and Linguini Aglio Olio with Smoked Duck (first course RM19++, mains RM32++), the currently blonde songstress, who made her music debut last September in Japan, clues me in on her current projects.

“Besides working on my second album, I’m planning to launch a sustainable business model that would generate long-term funds for VivaKids, a non-profit organisation that feeds, educates and improves the lives of underprivileged children in Third World countries,” Tan says.

“Some of the money would be channelled to help needy kids here. I want to be able make a difference in their lives.”

Admitting a preference for the Roasted Atlantic Cod with White Wine Sauce (RM58++), Tan puts this down to her penchant for seafood.

“I think the traditional Milanese lamb shank stew of Osso Bucco (RM50++) would appeal more to the guys,” she opines. “It’s such a robust, full-bodied dish. Look how tender the meat is! It falls off the bone at the mere touch of my fork.”

Lingering over the Key Lime Pie (RM13++) and Red Velvet Cake (RM13++) with coffee, the avid foodie recalls how she would attempt to replicate certain dishes in her kitchen.

“I love experimenting with recipes! Sometimes I’d call Mom for guidance but it doesn’t stop me from improvising along the way. One of these days, I’m going to produce and host my own online food and travelogue series!” she declares emphatically.

You can be sure that Hannah Tan, restless energiser bunny that she is, won’t rest on her laurels until she has added this particular feather to her cap.