Xin Cuisine’s auspicious offerings of yee sang, prosperity dishes and nian gao desserts will leave you hopping for joy this Year of the Rabbit.

ONE of the many Lunar New Year delicacies, nian gao, is eaten by the Chinese to signify higher aspirations and wishes for a better year ahead.

This steamed, sweet glutinous rice cake is usually sliced and deep-fried on its own or sandwiched in between slices of yam and sweet potato coated in light batter. But Xin Cuisine’s dim sum chef, Ng Meng Loong, shows off his creativity by making interesting sweet treats out of his homemade nian gao. 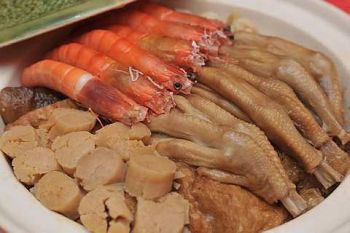 Not to be outdone, veteran Chinese Chef Foong Ah Kwai pulled out all the stops and came up with six types of yee sang, five different waxed meat dishes, six Prosperity Set Menus and a special Fortune Pot to make your feast even merrier.

Naturally, Chef Foong remained tight-lipped about what went into the fruity sweet and mildly tangy concoction. He would only divulge that apricot jam was used as its base.

You can also opt for Xin Cuisine’s Fortune Pot or Poon Choi at RM288++ for a small serving and RM488++ for large. Traditionally, it was a big bowl feast served at communal gatherings to celebrate certain festivals especially in the outskirts of Hong Kong and Shenzhen. Chinese historians believe poon choi was first created in the Song Dynasty using ingredients contributed by different peasant families that were pooled together into a large metal basin or wooden bucket. 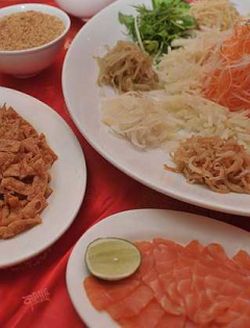 An enticing departure from the ubiquitous steamed fish with superior soya sauce, the steamed and baked pomfret will prove irresistible.

The delicate sweetness of the fish was enhanced by the toasty caramelised nuances of stir-fried garlic, shallots, leeks, spring onion and fresh basil subtly accentuated with Chinese wine. 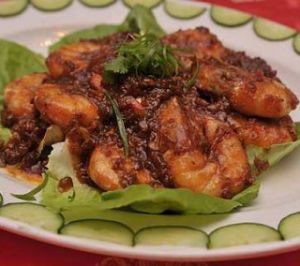 The Fried Prawns were equally delectable. The plump, springy crustaceans were slickly coated in a viscous sauce made of tomato and chilli sauce, belacan (shrimp paste) and pounded dried shrimps. Both items are not listed in the festive menu so you’d have to order them from the outlet manager or supervisor.