TO ADD a dash of colour and flavour to its Ramadan buffet dinner, the Tonka Bean Cafe in Impiana KLCC Hotel will feature Chinese-Muslim dishes. 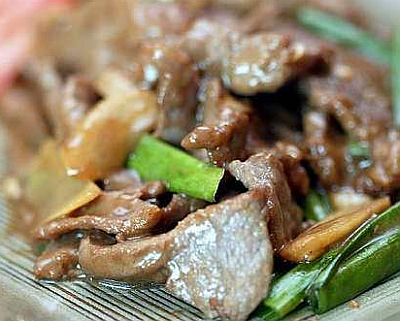 Chinese Muslim fare: The Wok-Fried Venison with Ginger and Spring Onion is one of the Chinese Muslim dishes featured on the buffet.

“We want to have something different for our customers so we have added a variety of Chinese dishes on the menu,” said executive chef Tawfeeq Seow.

Among the dishes that will be offered are the Wok-Fried Venison with Spring Onions and Ginger; Chinese Fried Rice with Silver Anchovy; and Chilly Crab. Perfect: The Indonesian Layer Cake is good as a starter to break fast or as a dessert.

As an added attraction, Tawfeeq said there would also be a stall offering fresh local fruits, including the local favourite — durian.

“For dessert, we have the regular Malay kuih, cakes and fruits but we are also serving 18 flavours of Baskin Robbins ice-cream at the cafe,” he said.

He added that this year a food bazaar would be introduced at the cafe’s alfresco area from 3pm onwards with stalls offering items such as satay, cucur ikan bilis, roti john and roti canai.

The Ramadan buffet dinner ends at 10pm daily and is priced at RM88++ for adults and RM44++ for children between six and 12 years old.