Fresh from the rivers

By EATING OUT TAN KARR WEI 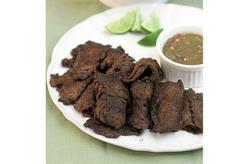 FRESHWATER fish caught in rivers are less likely to have that muddy taste that many discerning gourmets associate it with. 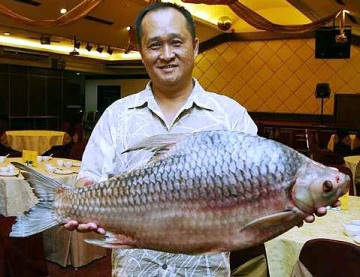 “Fish that is reared in ponds tend to have that muddy taste because of the stagnant water. Even sea- water fish reared in ponds could have that taste. The quality of the fish also depends on the type of food it eats,” said Empurau Fish Restaurant director James Wong.

Wong, who also supplies freshwater fish, often goes to places like the Pahang River and the Rejang River in Sarawak to source for the best catch.

He said one of the most expensive variety was the Empurau, for which the restaurant is named after.

“It is found only in India, Indonesia and Malaysia and the best ones are found in the Rejang River,” he said, adding that the prized fish could fetch more than RM1,000 per kg. Tangy dish: Another popular dish at the restaurant is the Sauteed Lady Finger andShrimps with Assam Sau.

Another fish that Wong recommended was the Mungalan, priced at RM160 per kg.

“The Mungalan is best eaten steamed with soy sauce, so that you can taste the sweetness and freshness of the meat. The part near the fins have bits of fat that has a lot of flavour,” he said.

The White Sultan, priced at RM280 per kg, had a firmer meat but was also best served the same style.

Manager Steve Tan said the restaurant also specialised in pork knuckles and it was one of their best sellers.

“The pork knuckle is first braised so that the meat absorbs the flavours. After the meat is cooled, it is then deep-fried,” said Tan.

Wong said another must-try at the restaurant was the mantis prawns, which is fried with either salted egg yolk or “chiu yim” style (with salt and pepper).

“To maintain the freshness, we peel the mantis prawns as soon as it arrives,” said Wong.

Those who prefer greens could try the Sauteed Vegetables with Hawaii Nut, which has a nice sweet crunch to it, owing to the fried macadamia nuts in the dish.

Besides the a la carte menu, the restaurant also serves dim sum during lunch hour.

For August and September, UOB credit card holders dining at the outlet with a minimum of four people would get a complimentary pork knuckle dish with orders from the a la carte menu. 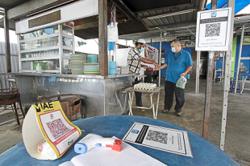