The art of pairing sake with Japanese food Sake is almost unrivalled when it comes to Japanese food-and-drink pairings. Many of the sake brewers I have met have told me that their sake is meant to go with food, as the traditional Japanese rice wine has qualities that can help enhance the flavours in the food. Some have even suggested their sake tastes even better when paired with a certain sort of meal.

So, when Japanese restaurant franchise Kampachi invited me for an omakase food and sake pairing at its Pavilion Kuala Lumpur branch, I simply could not resist.

Omakase means “I leave it to you” in Japanese, and refers to the Japanese tradition of leaving it up to the chef to decide what you eat. Kampachi has invited Chef Yamazumi Keisuke, a well-known Japanese chef known for his omakase menus and sake pairings, to feature his unique creations throughout the month of April.

Born and raised in Kagoshima Prefecture, Yamazumi started his culinary journey as an apprentice with famous Tokyo sushi bar Asahizushi Shonten at the young age of 19, and has since mastered a broad range of Japanese culinary skills over the decade. Appointed as the head chef of Asahizushi in 2015, he also directs the corporate catering team with his imaginative creations and exuberant flair.

With his discerning tastes in Japanese sake, his omakase focuses on the ebb and flow of flavours that ensure diners experience a unique combination in each Omakase course.

Yamazumi usually handles sake pairings in two ways – the first is by complementing the flavours of the food and the sake, for example, strong flavours with strong flavours, light and light.

“The other way is more experimental, where I purposely choose lighter flavours for the food so the stronger flavours of the sake can stand out more,” he said.

Appetisers Simmered Squid, and Scallop Isobeyaki, and Tempura Takenoko and Shin-Tamanegi, both paired with Asahigiku Rei.

These two approaches to sake and food pairing was displayed in our first two dishes at the tasting. For the appetiser, Yamazumi served Simmered Squid and Scallop Isobeyaki, pairing it with a cold Asahigiku Rei junmai ginjou.

The light and floral character of the sake complemented the lighter seafood flavours well, and even offered a little bit of contrast with the scallops, which were marinated in soy sauce before being grilled with the seaweed, giving it a little more savouriness on the palate.

The sake was also paired with the second dish, Tempura Takenoko (bamboo shoot) and Shin-Tamanegi (early harvest onions) from Japan, which are seasonal items for spring. This time, the contrast between the sake and the food was much more pronounced – the tempura had a light, crunchy texture and was served with a condiment of bamboo charcoal salt, which helped to enhance the sweetness of the sake.

If guests are not familiar with sake or do not have a clear preference of what sort of sake they like, Yamazumi would suggest starting with lighter-flavoured sake, then gauge the guest’s reaction to it before proceeding with the next one.

According to him, the course we had at Kampachi was designed for diners who are not familiar with sake, or are just casual drinkers. “It’s a more basic fundamental style that I usually start with. Then, when the guest is more familiar with the flavours, I can start giving them more bold pairings,” he said.

The next dish was Yakimono Cod that was both steamed and grilled, hence keeping the moisture and softness of the fish. The dish served up a lovely combination of grilled and steamed flavours – the grilled elements were more prominent at the beginning but the soft texture of the steamed meat balanced out the initial grilled notes.

It was paired with a warm cup of Hiokizakura Junmai Ginjo Denso Goriki sake, which was more medium-bodied than the first one, with creamier and more savoury rice notes, which helped enhance the fish’s more delicate flavours.

Yamazumi specialises in sushi omakase, so it was natural that our next dish was a plate of sushi, which included toro (tuna), snapper, sea urchin, amberjack, and anago (salt water eel). This time, we got a cold Izumibashi Junmai Shinriki to go with it.

This, for me, was my favourite pairing of the four. The sake was a beautifully balanced spirit – on the palate, there is a distinct savoury base laced with hints of floral sweetness, with a long, creamy umami finish that really complements the ingredients.

It’s a symbiotic relationship – the sushi helps enhance the umami goodness from the sake tenfold and the sake gives the sushi a lovely creamy sweetness.

According to Yamazumi, he personally prefers to choose the sake based on the food he eats rather than the other way around. “I prefer sake that has a cleaner flavour to go with food. Sake that has a sturdier flavour goes with heavier, earthier flavours like miso,” he said.

Still, the beauty of food pairings is the chance to explore different things and taste new flavour combinations. So, if you’re interested in exploring the world of Japanese food and sake pairings, this is your chance.

Yamazumi’s omakase menu is available from 6pm to 9pm on the following dates and venues: April 19 at Kampachi Plaza33 (Petaling Jaya), April 24 and 25 at Kampachi EQ at Equatorial Plaza, KL (without sake pairing), and April 26 at Kampachi Pavilion KL. The menu consists of five to six courses, with the price ranging from RM400 (without sake) to RM500 (with sake). Guest are advised to book two days in advance on Kampachi’s website (kampachi.com.my) or via Tableapp.

The art of pairing sake with Japanese food 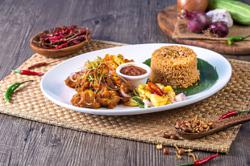