The Korean way to winning hearts and stomachs

It's that letter “K” again. From K-pop to K-beauty, there are also the flavours of the K-food that the Land of the Morning Calm wants to bring to the global stage.

In fact, South Korea’s No.1 food manufacturer, CJ Cheiljedang (CJ), obtained halal certification from Jakim three years ago for 46 products such as rice, seaweed and kimchi.

It also has the Korean Muslim Federation (KMF) certification for flour, sugar and yoghurt powder.

“We can enter the Malaysian food market with our current products right away, but we don’t think that the business can be grown ultimately without localisation. That’s why we are focusing on R&D, and try to develop Korean food connected with local foods,” said Chai Min Su, who is CJ’s senior specialist from its public relations department.

“Maybe soon, we will show off CJ’s products in Malaysia.”

In future, he said CJ would try to expand its food business not only to Malaysia and Singapore but also other Muslim countries such as Indonesia and those in the Middle East.

The Olive Grocery at CJ Cheiljedang's headquarters in Seoul.

“Even though Korean food is not familiar in the local market there, we’re going to make an effort to promote our brand based on the influence of the Korean wave.”

Despite CJ’s cautious steps before entering the Malaysian market with a blitz, it has a no-nonsense approach to food.

The Seoul headquarters of CJ Cheiljedang, which is one of the affiliates under the CJ Group, houses “CJ-The Kitchen”, a cooking studio where customers are given classes on how to cook dishes with ingredients made by CJ.

“It’s popular among housewives,” said Chai. “There is even a place for children to learn cooking.”

The one-hour cooking classes are free.

Chai, who gave a group of visiting Asean journalists from Asia News Network (ANN) a tour of the headquarters recently, also pointed to the presence of an “Olive Deli” and “Olive Grocery” there.

The grocery store sells ready-to-eat products and food ingredients for those looking to have “home meal replacements”. The deli offers a microwave, so customers can heat up their ready meals for immediate consumption.

The people at CJ are very proud of their award-winning signature brand, Bibigo, which was launched in 2013.

Bibigo, which derives from the words bibimbap (the Korean rice dish) and go, essentially means “mixing” (bibim) to represent a balance and harmony of different food elements, and “go get them” in their mission to conquer the global market.

According to Chai, Korean food seeks a balance on nutrition and taste, as well as harmony in colours.

It has a plant in Kerteh, Terengganu, which produces L-methionine, one of the essential amino acids for feed.

The bakery Tous les Jours used to have outlets in Malaysia.

It employs about 400 people of whom more than 90% are Malaysians.

“Since it is located in the east coast of Malaysia, it’s the best place to export L-methionine through the nearby Kuantan harbour facility. Also, we can take advantage of the easy access to necessary infrastructure, facilities and raw materials through local factories,” Chai said.

The CJ Group conglomerate has diversified into other sectors such as entertainment, homes shopping and logistics, and health and beauty, or essentially a purveyor of lifestyle and culture.

In fact, Kuala Lumpur folk would likely remember the bakery Tous les Jours, which was operated by another subsidiary, CJ Foodville.

There used to be four outlets of Tous les Jours here until it was shuttered last year.

“The contract with the previous local partner was finished. We are trying to find another competent partner to achieve higher goals,” Chai explained.

Actor Park Bo-gum on boxes of hetbahn, a precooked rice product by CJ.

CJ, which started as a sugar producing company in 1953, has evolved into a lifestyle company.

To quote from its website, its mission is to promote K-culture and influence lifestyles throughout the world through Korean movies, food, TV shows and music.

And what better way to promote its Bibigo products than to get the dashing actor Park Seo-joon to endorse its brand?

But the first “person” that Chai showed to the visiting ANN journalists was the hologram display of the bust of its founder Lee Byung-chull (1910-1987), who started Samsung. (CJ spinned off from the Samsung Group in the 1990s).

South Korea’s leading food manufacturer has not neglected its heritage.

The Korean way to winning hearts and stomachs 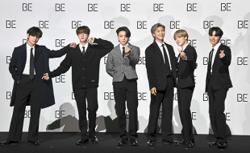